Experiencing The Triggering Of Higher Functions 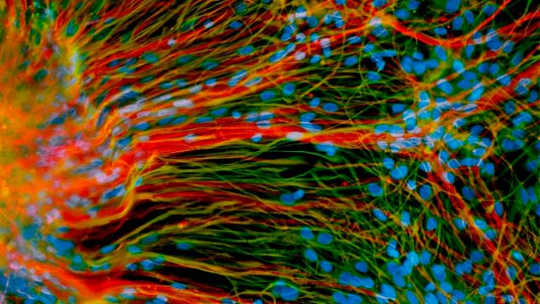 My work as an anthropologist over the past several decades has led me to suspect that there are countless numbers of evolutionary sleepers out there in the mainstream of humanity, each containing within themselves an extraordinary biological-energetic program.

I've come to believe that this program is on our DNA, part of our genetic "hard drive," so to speak, and it's been my personal experience that when this program is "double-clicked," higher functions coded into the personal mind-body matrix may be awakened.

Our conscious awareness may expand dramatically in response, allowing us to have the direct, transpersonal connection with the sacred realms that defines the mystic. Needless to say, this is an experience that has transformed me utterly.

The inner fieldwork of the mystics suggests that "the program" is closely associated with the ductless glands, the brain, and the heart; and that these organs, in turn, are in relationship with the dense concentrations of energy known as chakras, located in the core of our personal etheric matrix. When these physical and energetic mission control centers are activated, the relationship between them can dramatically affect the body and the brain, which may undergo striking changes.

At the time of this writing, humankind has not, as a whole, experienced the triggering of these higher functions, but those individuals who have could well be prototypes for a new kind of human. To be specific, the program may reveal who and what we may all become when we awaken from the consensual slumber of culture at large and are drawn across an evolutionary threshold to become a new species.

This is not fantasy, but a real phenomenon known to science as speciation. When it happens rapidly, producing a sudden evolutionary jump, it's called punctuated equilibrium.

After countless eons of time during which the human body and brain have taken form in co-creative relationship with Nature and Spirit, we appear to be ready to engage in a truly extraordinary adventure -- the evolution of consciousness.

In short, we're primed to experience the full expression of the human spectrum that is latent within us.

We live in interesting times. In addition to everything else going on in the Western world, there's a spiritual awakening quietly taking place, and right at its heart lies the discovery of that program within us -- a program that when experienced directly, has the potential to precipitate undreamed-of levels of personal transformation.

In response, increasing numbers of modern scholars and spiritual seekers alike are reconsidering who we are as human beings and where we came from. And in doing so, we're rediscovering the ancient, time-tested methods for expanding consciousness that were pioneered tens of millennia ago by the shamans and mystics of the traditional peoples -- techniques that are now known to be a form of technology -- a technology of the sacred.

Technology of the Sacred

Traditional people in indigenous societies know their surrounding environments in great detail. If there are psychotropic plants growing nearby, the ritual use of hallucinogens derived from these "plant teachers" is sometimes utilized for the purpose of expanding awareness and accessing the sacred realms.

Many investigators have even suggested that the discovery and use of plant-derived psychedelics (meaning "mind-manifesting") may have been responsible for the development of spiritual awareness in human beings in the first place. By implication, hallucinogens may very well have served as the causation for the genesis of religion. Accordingly, an alternate term for these plant teachers is often used -- the word entheogen -- meaning "releasing the deity within."

The growing literature on hallucinogens reveals striking cross-cultural similarities in the reported effects of these natural substances on human consciousness. These include the capacity to channel the energy of the universe, to discover the most profound secrets of nature, and to acquire wisdom that may he used for magical, medical, and religious purposes.

But equally powerful and far more widespread are the psychological and physiological methods developed by the traditional peoples for altering consciousness and repatterrning it in specific ways -- techniques such as fasting, sleep deprivation, physical exhaustion, hyperventilation, or even the experiencing of temperature extremes during rituals of purification such as the sweat lodge.

It's also generally known that the intensely physical stimulus of monotonous drumming and rattling, combined with culturally meaningful ritual and ceremony, prayer and chant, and singing and dancing, can enable the shifting of consciousness into visionary modes of perception. Not surprisingly, the use of drums and rattles by sacred practitioners around the world is almost universal.

Until relatively recently, Westerners have tended to regard the whole issue of altered-state experiences as mysterious, paranormal, and even pathological -- and some of us, in ignorance, still respond to the idea of expanded awareness and connection with spirits with fear and rejection.

By contrast, in a traditional society, each girl and boy grows up in relationship with elder ceremonial leaders and mystics who are able to access expanded states intentionally for the benefit of themselves and for others, or even for the entire community. The traditionals know that virtually everyone can learn how to access sacred states of consciousness to some extent, and that each of us is a potential holy person. They also know that some of us are real naturals at it.

With the double-clicking of the program, we become aware of our ability to perceive in an expanded way. And once activated, this ability improves and deepens with practice, allowing us to ascend toward the luminous horizon of our personal and collective destiny in a completely new way.

Today, this phenomenon can be partially understood in scientific terms. It's known, for example, that the nature of the visionary experience can be determined, to some extent, by our focused intentionality, by our belief systems, and by the set and setting in which we find ourselves. These serve as "repatterning forces" that can give new shapes to our mind-set, allowing the seeker to access many varieties of experience, including connection with the numinous dimensions of the spirit world ... if that is their intention.

The traditional people also know a great secret: Any human activity or endeavor can be enormously enhanced through utilizing and eventually mastering this sacred technology. Another secret: If we go back far enough, we're all descended from indigenous tribal ancestors, Westerners and non-Westerners alike.

The Journey to the Sacred Garden
by Hank Wesselman.

Reprinted with permission of the publisher, Hay House. ©2003. http://www.hayhouse.com

Anthropologist Hank Wesselman, Ph.D., served in the U.S. Peace Corps and has taught for Kiriji Memorial College and Adeola Odutola College in Nigeria; the University of California at San Diego; the West Hawaii branch of the University of Hawaii at Hilo; and California State University at Sacramento. He currently resides in Northern California, where he teaches at American River College and Sierra College and offers experiential workshops and presentations in core shamanism worldwide. He is also the author of Spiritwalker, Medicinemaker, and Visionseeker. Visit his website at www.sharedwisdom.com. by Hank Wesselman, Ph.D.
Among traditional peoples, when a woman expecting a child enters the last trimester of her… Become Your Own Teacher or Prophet Using The Shamanic Method

by Hank Wesselman, Ph.D.
It is of interest that the current spiritual reawakening is mainly happening outside the carefully…