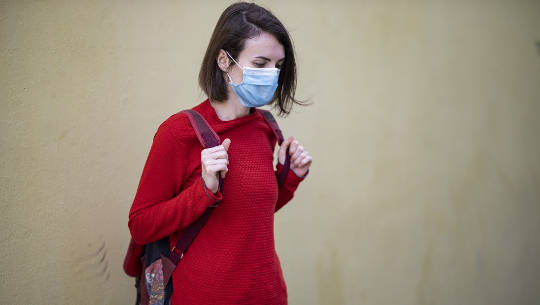 As I was checking out of a grocery store, I asked the clerk if she was looking forward to removing her mask when our state releases its mask requirement. “I’ve kind of gotten used to it,” she replied. “I might keep wearing it even after I don’t have to.”

Her response reminded me of a poignant scene in the movie The Princess Bride. Inigo Montoya is a swashbuckling swordsman who has spent his entire adult life seeking to find the man who assassinated his father. Many times each day he practices cornering the killer, pressing his sword against the man’s chest, and telling him, “My name is Inigo Montoya. You killed my father. Prepare to die.”

Inigo eventually catches up with the assassin and does him in. As Inigo is exiting the castle, his sidekick asks him, “Now that you have avenged your father’s death, what will you do with your life?”

Inigo stops in his tracks, a blank look washes over his face, and he confesses, “I have been in the revenge business so long, I don’t know what I would do without it.”

Steeped In Fear, Protection, and Defense

It is possible to become so steeped in fear, protection, and defense, that when we no longer need to protect ourselves, we may continue to do so out of habit and a sense of safety behind elaborate barricades. This dynamic goes far beyond Inigo Montoya and Covid masks. It applies to much of our life.

We have all adapted to a threatening world with masks we lay over our natural self. Such guises often take the form of a victim identity. The classic example of a rutted victim is Miss Havisham in Charles Dickens’ classic novel, Great Expectations. Young Pip goes to visit Miss Havisham, a fiftyish woman wearing a tattered yellowed wedding gown. Yet she looks much older, a bony waxwork. On her dining room table sits an expensive china set for a wedding reception, and a cake covered with cobwebs.

Many years earlier, Miss Havisham was jilted at the altar. She felt so crushed that she became frozen in that moment and found twisted solace in clinging to her identity as a ditched bride. And so she remained, thirty years later. Like the checkout clerk and Inigo Montoya, Miss Havisham became so comfortable in her mask that she feared to remove it, and never did.

Laying Down Our Arms and Our Masks

When the war is over, we can lay down our arms. After World War II, some soldiers holed up in the jungles of South Pacific islands did not know the war was over, so they remained in combat mode long after the enemy had disappeared. People who go through traumatic experiences sometimes keep reliving the trauma even when they are safe.

How To Trust Your Soul To Produce The Most Beneficial Outcome

Life Is Like A GPS: You're On A Need-To-Know Basis

Sadly, the Covid pandemic has been a rough ride for lots of people. At some point, the ride will be over, and we will be on to the next phase, hopefully gleaning lessons from the experience that will make the next phase better.

Releasing the Buddha from Imprisonment

Many years ago, a great golden statue of Buddha sat outside a temple near Bangkok, Thailand. When the monks at the temple learned that an army from a neighboring country was about to invade their town, they feared that the soldiers would see the gold and pillage it. So they came up with a scheme to cover the golden Buddha with a cement of mud and stones, so the soldiers would not take notice.

Sure enough, when the army marched past the temple, they overlooked the Buddha entirely. The conquerors occupied the city for many years and later departed. But by that time none of the monks in the monastery or anyone in the vicinity remembered that the Buddha was golden. They all thought it was made of stone.

Many years later a new king arose, and he ordered the Buddha to be moved to a new location. In the process of moving, a piece of stone chipped off the Buddha and revealed something shiny. A workman looked deeper and saw that it was gold. He ran to his fellows, shouting, “The Buddha is golden!” The workers took picks and shovels and released the golden Buddha from his cement imprisonment. To this day, you can visit the Temple of the Golden Buddha in Bangkok.

Many of us have become Covid stone Buddhas, disguising our divine nature under a sheath of fear, protectionism, and divisiveness. Meanwhile, lots of people have maintained our golden Buddha nature even while we wear masks.

A physical mask cannot stop your spiritual light from shining. In spite of external events, we remain divine. Now we are ready for the great unveiling—physically by removing masks, spiritually by rising beyond fear. The Golden Buddha is ready to once again shine.

*subtitles added by InnerSelf
©2021 by Alan Cohen. All Rights Reserved.

Soul and Destiny: Why You Are Here and What You Came To Do
by Alan Cohen.

Does your life have a plan and a purpose? Is your destiny fixed, or can you choose how your journey turns out? Can you change a destiny already set in motion? Why do certain people and patterns show up in your world? Is there a you that runs deeper than your body and personality? Will a part of you go on after you leave the world?

Alan Cohen sheds welcome light on the answers to these important questions, and many more. In his warm and relatable style, he makes big-picture ideas easy to understand, with many heartwarming, compelling stories. If you are trying to make sense of who you are, where you come from, and where you are going, here you will find many profound and touching insights to discover your true self and achieve your highest destiny. The Gift of Uncertainty: Making Friends with Maybe The Gift of Uncertainty: Making Friends with Maybe (Video)

How to Avoid Emotional Flooding: The Four Rules of Communication

by Jude Bijou, M.A., M.F.T.
All good communication boils down to following four simple rules. Abiding by them, anyone can…

Living Your Truth and Your Evolutionary Calling

by Kim Chestney
When you live your truth, you know who you are, and you own it. The person you are inside and the…