Heat Doesn’t Have To Get Extreme To Threaten Health 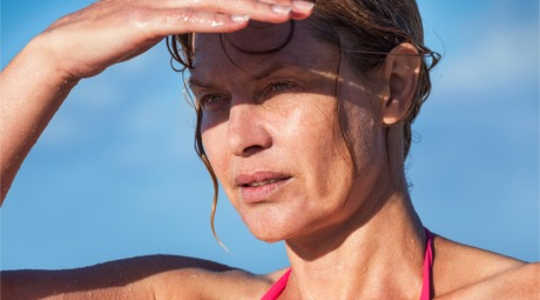 "Everybody believes that heat is dangerous but not for them," says Gregory Wellenius. "One of the messages is that this is really across the age spectrum. Heat remains one of the leading causes of weather-related deaths."

As climate changes push summertime temperatures higher by the end of the century, scientists predict an increase in deaths and visits to the emergency room among people in Rhode Island.

The study is based on a detailed statistical analysis of emergency department visits, deaths, weather data, and possibly confounding factors (such as ozone) from recent years. The researchers could tell from the records whether emergency doctors thought a patient’s condition was related to heat or dehydration.

“Our primary finding is that as temperatures increase, the number of emergency room visits and deaths increase,” says Samantha Kingsley, a Brown University public health graduate student and lead author of the study in the journal Environmental Health Perspectives. “But people were going to the hospital for heat-related reasons at temperatures below what we would typically consider extreme.”

Meanwhile, the state’s death rate was 4 percent higher on a typical 85-degree day vs. a typical 75-degree day. Like ED visits, deaths appear to rise as high temperatures do, even at temperatures that many people would not consider extreme.

“People should be aware that heat represents a significant public health threat,” says Gregory Wellenius, associate professor of epidemiology at Brown and the study’s senior author. “We do need to take heat seriously as a public health risk, even if there isn’t a heat warning.”

Notably the strongest association between heat-related ED visits and higher temperature was not among senior citizens, but among Rhode Islanders aged 18-64. Many could be workers who remain outside on hot days, perhaps when it isn’t so safe.

“Everybody believes that heat is dangerous but not for them,” Wellenius says. “One of the messages is that this is really across the age spectrum. Heat remains one of the leading causes of weather-related deaths.”

The finding that ED visits and deaths are greater on warmer days, even if temperatures are only in the 70s or 80s, suggests that distress from the heat may become even more common as temperatures rise as a result of global warming.

To investigate that possibility, the researchers projected how much greater ED visits and mortality would be if the current Rhode Island population were living with the increased temperatures forecast by two standard models of global warming—one with a 6-degree rise by the end of the century and the other with a 10-degree rise. Their estimates use the models’ temperature forecasts for two ranges of years: 2046-2053 and 2092-2099.

They project that if days became 10 degrees hotter by the end of the century, as in the hotter of the two models, the state’s summertime death rate would rise by about 1.5 percent (about 80 more deaths each summer) and the rate of heat-related emergency department visits would increase by about 25 percent (from about 6,000 to about 7,500 each summer).

In both time periods and each scenario of warming temperatures, deaths and ED visits among Rhode Islanders would be higher. For example, even with the 2046-2053 temperatures forecast by the milder of the two models, the rate of heat-related ED visits is still estimated to rise by about 5 percent and the rate of deaths rises by about 0.6 percent.

Warmer temperatures could increase the death rate in Rhode Island by more than 1.5 percent by the end of the century, under the warmer of two climate change models.

How To Stay Safe

By applying the effects of future temperatures to the current Rhode Island population, the study does not account for any of the possibly mitigating or exacerbating factors that could occur in the future. Improvements in technology or simply better education about of the health effects of heat could allow Rhode Islanders to tolerate better the higher temperatures of the future.

Given the already apparent increase in ED visits and deaths on warmer days today, Kingsley says, people may want to pay more attention to the health risks of heat even as this summer runs its course.

“Not even projecting into the future, it’s important for people to be aware of heat, and not just above 100 degrees,” Kingsley says. “Be prepared for any outdoor activities: Pack water bottles, stay hydrated. Get into air-conditioned environments at some point to cool down.”

The Centers for Disease Control and Prevention, the National Institute of Environmental Health Sciences, and the Institute at Brown for Environment and Society funded the study. How To Decrease The Risk Of Premature Death

by Bradley Elliott, University of Westminster
There’s long been evidence that moderate aerobic exercise (think walking, running, or cycling) are… Can Frustration Be Part Of A Beautiful Plan?

Freeing Yourself from Toxic Relationships

by Nora Caron
In this article I will explore what toxic relationships are, explain how we can get out of them,…