The First 100 Days and the Degradation of the Presidency 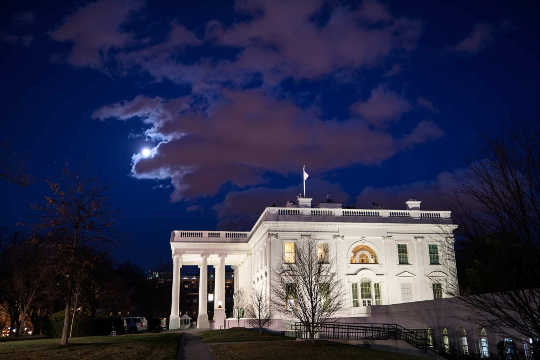 Trump’s failure to accomplish little or any of his agenda during his first 100 days shouldn’t blind us to the vast harm he has done in this comparatively short time to our system of government, especially his degradation of the presidency.

From early in the Republic, we have looked at the office of the president as a focal point for the nation’s values. Washington, Jefferson, Lincoln, and the two Roosevelts exemplified for generations of Americans the moral authority of the highest office in the land. It is not merely what these men accomplished, but how they did it; not just their policies but their positive effects on the institutions of democratic governance.

True, many of our presidents have fallen short of those ideals. But our disappointments in those individuals reflected the high expectations we have had for those who hold that office.

Yet under Trump, the moral authority of the presidency has all but disappeared.

Donald Trump invites Sarah Palin and Ted Nugent, who once called President Obama a “mongrel,” and we feel sullied.

But it has not just been Trump’s vulgarity.

There have also been Trump’s lies – blatant, continuous, and unsubstantiated even after the lack of evidence has been pointed out repeatedly.

They are not just any lies, but lies that deepen Americans’ suspicion of one another and undermine our confidence in our system of government – such as his repeated contention that “three to five million” people voted illegally in the last election, or that Obama spied on him during the campaign.

Prior presidents have embellished the truth and on occasion have lied about a particular important thing, such as the existence of weapons of mass destruction in Iraq. But never before Trump have we had a president who chronically lies, whose lies have become an integral part of his presidency even in the first 100 days.

There is also Trump’s vast family business, from which he continues to benefit even though the decisions he makes in office affect what he earns, and the almost certain decisions by foreign governments to curry favor with him by bestowing benefits on his business.

Trump shrugs off such conflicts – even refusing to release his tax returns, even inviting his daughter and son-in-law, each with their own businesses and conflicts of interest, to join him at the highest reaches of the White House.

Some presidents have profited from their presidencies after they leave office through large speaking fees and book contracts. But never before Trump have we had a president for whom conflicts of financial interest during his presidency are so flagrant yet ignored.

The first 100 days has also been marked by Trump’s divisiveness – turning Americans against each other, legitimizing hatefulness toward Mexican-Americans and Muslim-Americans and African-Americans, fueling violence between his supporters and his opponents.

We have had divisive elections before. But after them, other presidents have sought to heal the wounds. Even after the horrors of the Civil War, Lincoln famously asked us to come together without malice.

Trump, by contrast, has fomented the warring camps – calling his opponents “enemies,” suggesting they are plotting against his administration, and staging rallies to encourage and fuel his bedrock supporters.

We have also seen Trump’s cruelty – toward refugees, undocumented immigrants, and the poor among us. He has issued a budget that would deeply harm the least advantaged Americans, and supported a repeal of the Affordable Care Act that would also hurt those most in need.

He has refused asylum to refugees at a time when the world faces the largest refugee crisis since World War II, and unleashed immigration enforcers on 11 million residents of the United States, many of whom have been productive members of their communities for years. He has even deported people who have been here since childhood and know know no other nation.

Other presidents have on occasion been cruel. But Trump’s cruelty has defied reason. It is utterly unnecessary.

There has also been Trump’s affect on the rest of the world – legitimizing crude nationalism and hateful xenophobia. He has promoted France’s Marine Le Pen and encouraged authoritarians such as Turkey’s Tayyip Erdogan, while at the same time confusing our democratic allies and friends.

Finally, there is Donald Trump himself – who in the first 100 days as president has shown himself to be narcissistic, xenophobic, paranoid, vindictive, and thin-skinned; who takes credit for the work of others and blames others for his own failings; who lashes out at the press and journalists when they criticize him, and who demonizes judges who disagree with him.

We have before had presidents whose personality defects harmed their presidencies and tainted the office of the president, such as Richard Nixon. But Donald Trump is in a different league altogether. He exhibits the opposite of every civic virtue ever encouraged in our school rooms, town halls, and churches.

The first 100 days is an artificial landmark for presidents. But it does offer an opportunity to pause and assess what they have done. Too often, though, we think in the narrow gauge of policies and legislation.

With Trump, it’s important to think more broadly. Among the most significant legacies of his first 100 days is his degrading of the moral authority of the office of the president, and, thereby, of America.