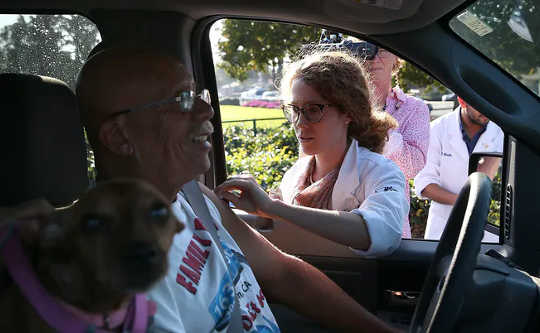 A man in San Pablo, California, gets a flu shot at a drive-through flu shot clinic Nov. 6, 2014. Justin Sullivan/Getty Images

Misunderstandings about flu vaccines have existed for decades, leading to vaccine mistrust and lower-than-ideal vaccination rates. Now that a coronavirus vaccine appears to be close, experts are concerned that the lack of trust and understanding about flu vaccines could translate into lower-than-optimal coronavirus vaccination rates.

In fact, recent surveys suggest that many Americans would not get vaccinated for COVID-19; a Pew Research Center study released in September reported that nearly half definitely or probably would not. The persistence of anti-vaccine sentiment, partly based on mistrust of vaccine ingredients, is likely contributing to the hesitancy.

The lack of trust is especially upsetting to public health officials, doctors and other scientists. The issue is especially irksome because a major reason for vaccine reluctance sprang from a debunked, retracted and outright false article.

Even though the study was discredited a decade ago, undoing the damage has been difficult. The event showed how easy it is to disseminate incorrect information, particularly over the internet.

As drug information pharmacists, we want to review the ingredients that have caused so much controversy – and to remind you this is a great time to get your flu vaccine. As coronavirus cases soar, threatening not only lives but also the ability of hospitals to care for them, getting a flu vaccine is a crucial part of self-care and health care.

The flu vaccine is different every year; that’s because there are different types of viruses and strains of each virus. The contents of the vaccine depend on the kind of flu that has been circulating in any given year.

The FDA Vaccines and Related Biological Products Advisory Committee determines a vaccine for the coming flu season, using the best scientific evidence at hand to determine which virus strains should be included.

To mass-produce the flu vaccine, a large amount of virus needs to be replicated. Vaccine manufacturers do this in eggs or in animal cell lines from which the virus can be harvested. The final product may contain trace amounts of egg protein. Even individuals with egg allergies can usually receive these vaccines; however, for those with severe allergy to egg proteins, flu vaccines that don’t contain egg protein are available.

Flu vaccines carry a killed, or dead, version of the virus. In turn, the body mounts an immune response, but the vaccine cannot cause the flu because the virus is killed.

How To Heal Ourselves with Energy and Intention

The Positive Benefits of Sunlight

One flu vaccine administered as a nasal spray – FluMist – does contain a weakened form of the live virus. In healthy people, this won’t cause the flu, but it can cause runny or stuffy nose, headache and sore throat. The live, weakened flu vaccine should not be used if you have a weakened immune system or are caring for someone with a compromised immune system.

Chemical agents are used to inactivate the virus. But the amount of any inactivating agent in the finished flu vaccine is negligible.

One common agent is formaldehyde. Higher levels of formaldehyde are naturally found in fruits. An average apple contains 600 times more formaldehyde than is found in a dose of the flu vaccine. 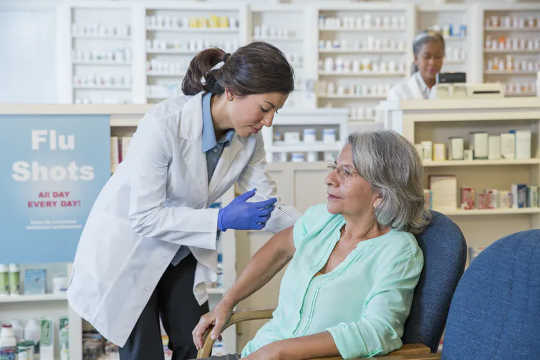 Flu vaccines carry a dead version of the virus; the vaccine doesn’t cause the flu. Terry Vine via Getty Images

Vaccines also must be stabilized to help maintain the effectiveness of the vaccine in case it is exposed to heat, light or moisture, or if it experiences changes in acidity. Vaccine makers use stabilizers such as sucrose, sorbitol, gelatin and monosodium glutamate (MSG).

All are food ingredients found in almost every kitchen. Sucrose and sorbitol are sugars; gelatin, derived from collagen, is used in Jell-O and gummy bears; monosodium glutamate adds flavor to many dishes. And the amount of stabilizer found in flu vaccines is very small. The average person consumes much more of these ingredients per day through normal food consumption. For example, the amount of sugar and gelatin in a vaccine dose is far less than that found in a single gummy bear. And for those with gelatin allergies, a flu vaccine without it is easy to find.

Vaccines can get contaminated, and to prevent that, thimerosal is sometimes added to prevent bacterial or fungal contamination from using the same vial to deliver multiple doses. The discredited study led many people to believe that thimerosal in vaccines can cause autism. But multiple studies that followed could not establish an association between thimerosal-containing vaccines and autism.

Thimerosal contains an organic derivative of mercury called ethylmercury, one of two types of the element to which people may be exposed. The body eliminates it more easily than the second type, called methyl mercury, which is found in contaminated fish.

It is true that high exposures to mercury can affect the central nervous system; but the amount of elemental mercury found in a vaccine dose is 25 mcg, which equates to the amount in a 3-ounce can of tuna fish. That said, because thimerosal is found only in multidose vials, it can easily be avoided by receiving a thimerosal-free single-dose flu vaccine.

One flu vaccine, Fluad and Fluad Quadrivalent, is approved to prevent seasonal influenza in adults 65 and older. It contains an extra ingredient, or adjuvant, to boost the immune response. The adjuvant in this vaccine is MF59, an oil-in-water emulsion of squalene oil.

Squalene is found naturally in plants, animals and the human body. The squalene in the flu vaccine, highly purified, is obtained from shark liver oil. Squalene from shark livers is also present in cosmetics, over-the-counter medicines and dietary health supplements. Each dose of vaccine contains about the amount in 4 teaspoons of olive oil. No severe reactions associated with squalene in vaccines have been observed.

Antibiotics are often used in vaccine production to prevent bacterial contamination during manufacturing. In some cases, very small amounts may be in the vaccines. These antibiotics are not the ones commonly associated with severe allergic reactions, such as penicillins, cephalosporins and sulfa drugs. Instead, antibiotics commonly used in flu vaccine manufacturing include neomycin, kanamycin, polymyxin B and gentamicin.

Different formulations of the flu vaccine contain a variety of ingredients, but most are in extremely small quantities. They are unlikely to produce negative effects when administered as a single dose once a year. Unless a person has a history of a severe allergic reaction to an ingredient, most flu vaccines can be safely administered.

Centuries ago, the father of toxicology, Paracelsus, said, “What is there that is not poison? All things are poison and nothing is without poison.” Water is healthy for us in appropriate amounts, but too little or too much of it could potentially lead to death. It’s the dose, says Paracelsus, that determines whether or not something is dangerous. Centuries later, consider that sage advice when you think about whether or not to take the flu vaccine. Give Yourself Time, Be Kind, and Heal in Your Own Way (Video) by Charles Eisenstein
On a country hilltop one fall day, an herbalist challenged me to recall where I'd gotten the belief…

The Greatest Christmas Present Ever

by Pierre Pradervand
In a variety of teachings, unconditional love is the heart and soul of the spiritual life and the…