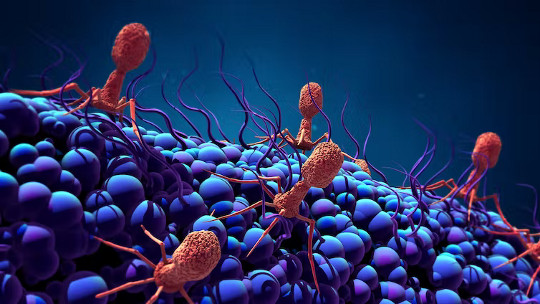 Phages can sense bacterial DNA damage, which triggers them to replicate and jump ship. Design Cells/iStock via Getty Images Plus

After more than two years of the COVID-19 pandemic, you might picture a virus as a nasty spiked ball – a mindless killer that gets into a cell and hijacks its machinery to create a gazillion copies of itself before bursting out. For many viruses, including the coronavirus that causes COVID-19, the “mindless killer” epithet is essentially true.

But there’s more to virus biology than meets the eye.

Take HIV, the virus that causes AIDS. HIV is a retrovirus that does not go directly on a killing spree when it enters a cell. Instead, it integrates itself into your chromosomes and chills, waiting for the right moment to command the cell to make copies of it and burst out to infect other immune cells and eventually cause AIDS.

Exactly what moment HIV is waiting for is still an area of active study. But research on other viruses has long hinted that these pathogens can be quite “thoughtful” about killing. Of course, viruses cannot think the way you and I do. But, as it turns out, evolution has endowed them with some pretty elaborate decision-making mechanisms. Some viruses, for instance, will choose to leave the cell they have been residing in if they detect DNA damage. Not even viruses, it appears, like to stay in a sinking ship.

My laboratory has been studying the molecular biology of bacteriophages, or phages for short, the viruses that infect bacteria, for over two decades. Recently, my colleagues and I have shown that phages can listen for key cellular signals to help them in their decision-making. Even worse, they can use the cell’s own “ears” to do the listening for them.

If the enemy of your enemy is your friend, phages are certainly your friends. Phages control bacterial populations in nature, and clinicians are increasingly using them to treat bacterial infections that do not respond to antibiotics.

The best studied phage, lambda, works a bit like HIV. Upon entering the bacterial cell, lambda decides whether to replicate and kill the cell outright, like most viruses do, or to integrate itself into the cell’s chromosome, as HIV does. If the latter, lambda harmlessly replicates with its host each time the bacteria divides.

But, like HIV, lambda is not just sitting idle. It uses a special protein called CI like a stethoscope to listen for signs of DNA damage within the bacterial cell. If the bacterium’s DNA gets compromised, that’s bad news for the lambda phage nested within it. Damaged DNA leads straight to evolution’s landfill because it’s useless for the phage that needs it to reproduce. So lambda turns on its replication genes, makes copies of itself and bursts out of the cell to look for more undamaged cells to infect.

Some phages, instead of gathering intel with their own proteins, tap the infected cell’s very own DNA damage sensor: LexA.

Proteins like CI and LexA are transcription factors that turn genes on and off by binding to specific genetic patterns within the DNA instruction book that is the chromosome. Some phages like Coliphage 186 have figured out that they don’t need their own viral CI protein if they have a short DNA sequence in their chromosomes that bacterial LexA can bind to. Upon detecting DNA damage, LexA will activate the phage’s replicate-and-kill genes, essentially double-crossing the cell into committing suicide while allowing the phage to escape.

Scientists first reported CI’s role in phage decision-making in the 1980s and Coliphage 186’s counterintelligence trick in the late 1990s. Since then, there have been a few other reports of phages tapping bacterial communication systems. One example is phage phi29, which exploits its host’s transcription factor to detect when the bacterium is getting ready to generate a spore, or a kind of bacterial egg capable of surviving extreme environments. Phi29 instructs the cell to package its DNA into the spore, killing the budding bacteria once the spore germinates.

Transcription factors turn genes on and off.

In our recently published research, my colleagues and I show that several groups of phages have independently evolved the ability to tap into yet another bacterial communication system: the CtrA protein. CtrA integrates multiple internal and external signals to set in motion different developmental processes in bacteria. Key among these is the production of bacterial appendages called flagella and pili. Turns out, these phages attach themselves to the pili and flagella of bacteria in order to infect them.

Our leading hypothesis is that phages use CtrA to guesstimate when there will be enough bacteria nearby sporting pili and flagella that they can readily infect. A pretty smart trick for a “mindless killer.”

These are not the only phages that make elaborate decisions – all without the benefit of even having a brain. Some phages that infect Bacillus bacteria produce a small molecule each time they infect a cell. The phages can sense this molecule and use it to count the number of phage infections taking place around them. Like alien invaders, this count helps decide when they should switch on their replicate-and-kill genes, killing only when hosts are relatively abundant. This way, the phages make sure that they never run out of hosts to infect and guarantee their own long-term survival.

You may be wondering why you should care about the counterintelligence ops run by bacterial viruses. While bacteria are very different from people, the viruses that infect them are not that different from the viruses that infect humans. Pretty much every single trick played by phages has later been shown to be used by human viruses. If a phage can tap bacterial communication lines, why wouldn’t a human virus tap yours?

So far, researchers don’t know what human viruses could be listening for if they hijack these lines, but plenty of options come to mind. I believe that, like phages, human viruses could potentially be able to count their numbers to strategize, detect cell growth and tissue formation and even monitor immune responses. For now, these possibilities are only speculation, but scientific investigation is underway.

Having viruses listening to your cells’ private conversations is not the rosiest of pictures, but it’s not without a silver lining. As intelligence agencies all around the world know well, counterintelligence works only when it’s covert. Once detected, the system can very easily be exploited to feed misinformation to your enemy. Similarly, I believe that future antiviral therapies may be able to combine conventional artillery, like antivirals that prevent viral replication, with information warfare trickery, such as making the virus believe the cell it is in belongs to a different tissue.

But, hush, don’t tell anybody. Viruses could be listening!