Lessons From Climbing The Social Ladder In Ancient Rome 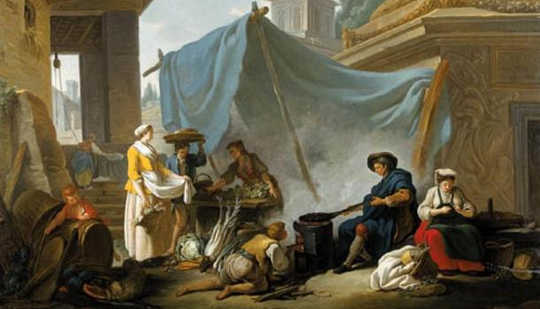 It is easy to imagine ancient Rome as a society where the emperors, senators and other nobles sat on top of an undifferentiated, static mass of ordinary Romans (who in turn sat above the mass of slaves). But Roman society was, in fact, highly stratified throughout and people of all social levels went to great lengths to better their lot in life and climb the social ladder. Some even succeeded in joining the empire’s richest ranks.

The traditional view of the Roman people lounging around at the games ignores just how much they had to work. As Pliny the Younger noted when recommending a young man to a friend: “He loves hard work as much as poor people usually do”. Most free men in the country were peasants and in the towns and cities were unskilled labourers, doing such jobs as carrying the goods imported to the docks of Rome at Ostia and working on building the great imperial buildings, such as the Colosseum.

Manual work was never going to pay well and probably provided little more than a subsistence income. The main way for people to improve their quality of life was to acquire a skill. If a worker could learn a craft then his income as an artisan could comfortably rise to double or treble that of an unskilled worker. 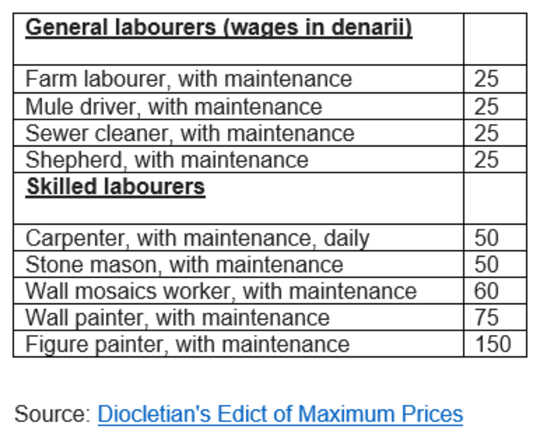 The variety of skilled jobs we find in the sources is extraordinary. More than 225 trades are listed on tombstones and other inscriptions. A letter attributed to the emperor Hadrian, for example, gives us an idea of the competitive industry that the urban population of Alexandria showed in their pursuit of making a living:

No one is idle. Some are blowers of glass, others makers of paper, all at least are weavers of linen or seem to belong to one craft or another … Their only god is money, which everyone adores.

Women also played an important economic role. That women are listed in only 35 different occupations, however, shows that their opportunities were far more limited. They worked mainly in the service sector, spinning wool, making jewellery, serving in taverns, hairdressing and making and mending clothes.

If a Roman had some capital, lending money could be very profitable. One source describes commercial moneylenders “rejoicing in the accrual of money which increases day by day”. Their joy was understandable as 12% interest was typically charged for unsecured loans. Interest on short-term loans in crisis periods could reach 50%. And if the borrower failed to make payments on time, creditors held considerable legal powers and could sell all the debtor’s possessions – including his children – into slavery.

Trade was anther profitable business – and the empire’s shipping routes were busy with vessels transporting all manner of goods, such as wine, pottery, olive oil, spices and slaves. The aristocracy looked down on trade as being beneath them but that did not stop them from using front-men to carry out business on their behalf. It seems that former slaves were often used in this role, presumably because they could be more trusted to do what they were told and hand over the bulk of the profits at the end of the deal.

These freedmen frequently proudly asserted their prosperous – free – status on inscriptions on their tombs. Some former slaves of emperors became extremely influential and rich, such as Narcissus – a former slave of Emperor Claudius in the first century AD who went on to amass considerable wealth and influence as a freedman. The status of freedman as former slaves, however, meant they were never fully accepted among the social elite.

If a Roman wanted to make it really big then he needed to become a celebrity. Successful gladiators were adored by the crowds. Mosaics featuring them were widespread. They were a common topic of conversation and even a clay baby’s bottle at Pompeii was stamped with a figure of a gladiator – presumably so that the infant could drink in strength and courage along with its milk. The fighters were handsomely paid for their work but, of course, few survived to enjoy a prosperous old age.

Charioteers actually seem to have earned the most, reflecting the great popularity of the regular chariot racing – the Circus Maximus held 250,000 spectators. The most successful charioteer known was the second-century AD champion Gaius Appeleius Diocles, from Lusitania, now Portugal. In a 24-year career, he competed in 4,257 races, winning 1,462 of them. His career earnings reached 35,863,120 sesterces – estimated at US$15 billion. Given it took only one million sesterces to qualify as a senator, the size of his fortune is clear.

So it took hard work, patience – and sometimes a great deal of risk – but if it all came good, any Roman could hope to rise up to a position where they owned a villa and amassed a fortune. Those who achieved it, though, were the lucky few. by Alex Gallo-Brown, author of Variations of Labor
For decades, Americans have been told they should love their jobs. But is this a healthy…

by Elizabeth E. Meacham, Ph.D.
During the first decade of my eco-spiritual study and practice, my nature-based spiritual practices…

Give the Gift of Kindness and Move Towards Love and Connection

by Jude Bijou
Kindness shows itself in a lot of ways, such as acts of compassion, helpfulness, empathy,…

Transform Your Life by Exploring and Changing Your Current Story

by Carl Greer PhD, PsyD
Many of us look back and wish that we had spent more time doing what we enjoy and less time doing…