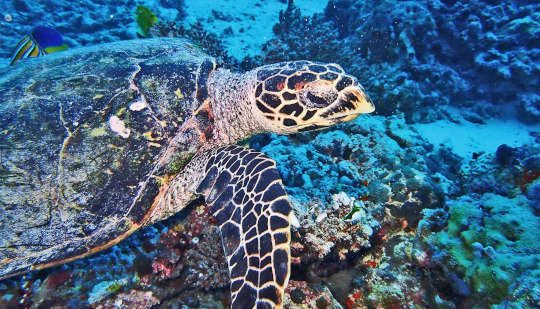 "It is really hard to know how a species is doing by just looking out from your local coast, or dipping underwater on scuba," says Ben Halpern. "You only see a small patch of where a species lives and what it is experiencing, and only the few species you happen to see on that day." (Credit: Valerie Hukalo/Flickr)

Despite the fact that our planet is mostly ocean and human maritime activity is more intense than ever, we know remarkably little about the state of the ocean’s biodiversity—the variety and balance of species that support healthy and productive ecosystems. And it’s no surprise—marine biodiversity is complex, human impacts are uneven, and species respond differently to different stressors.

“It is really hard to know how a species is doing by just looking out from your local coast, or dipping underwater on scuba,” says Ben Halpern, a marine ecologist at the Bren School of Environmental Science & Management at the University of California, Santa Barbara and director of the National Center for Ecological Analysis and Synthesis. “You only see a small patch of where a species lives and what it is experiencing, and only the few species you happen to see on that day.”

Though valuable, these snapshots are only part of a much larger picture of cumulative human impacts on at-risk marine species. Even less obvious are changes in impact over time and assessments of vulnerability to these impacts, which differs across species.

“This is the first study of its kind looking at the effects of human activity on marine species, and the first looking at changes over time,” says Casey O’Hara, a doctoral student in the Bren School. Taking data on 1,271 threatened and near-threatened marine species from the International Union for Conservation of Nature and Natural Resources’ (IUCN) Red List, the researchers mapped the at-risk species along range and anthropogenic stressors from 2003-2013.

“We focused on those species known to be at a higher risk of extinction because from a conservation perspective, it’s especially important to understand where and how our activities continue to jeopardize those species,” O’Hara says.

“Not every species is affected the same way by various human activities—some species are more sensitive to fishing pressures while others are more vulnerable to rising sea surface temperatures or ocean acidification.”

Mapping over a series of 11 years would also give the researchers a sense of cumulative human impact, a method they first used in a previous study that focused on representative marine habitats.

Where does human activity hit hardest?

It’s not a shock. Human impacts on marine biodiversity are increasing, dominated by fishing, direct human disturbance from land, and ocean acidification. But the authors made some unexpected discoveries.

The extent to which at-risk species face these pressures from human activities, and the pace at which the pressures are expanding and intensifying, is worrisome. Corals are the most widely impacted marine organism on Earth.

“I was surprised at the extent to which corals were impacted—coral species are facing impacts across essentially their entire ranges and those impacts are only getting more intense, particularly climate-related impacts,” O’Hara says.

“We hear stories of coral bleaching and the like, but our results really highlight the impact we are having.” The species of the Coral Triangle—the tropical waters connecting Indonesia, the Philippines, Papua New Guinea, and the Solomon Islands—are among the most affected by human impacts, as are species in the North Atlantic, North Sea, and Baltic Sea.

The information from this approach could give decision-makers a deeper understanding of where and how human activity affects marine biodiversity, which could lead to effective solutions. For instance, addressing areas of human impact overlap can maximize the benefits of conservation for several species in the area. Effective conservation measures can help ease the pressures of climate change phenomena such as ocean acidification or rising ocean temperatures.

The team might get the chance to put their findings to work later this year, at the UN Convention on Biological Diversity’s 15th Conference of Parties, where 197 participating nations and territories will convene on a framework to protect and conserve global biodiversity.

“That framework will include targets for protecting land and ocean areas globally, along the lines of President Biden’s executive order to protect 30% of US lands and coastal waters by 2030,” O’Hara says. “With our study we hope to highlight those areas where such protection can do the greatest good for those species and ecosystems at greatest risk.” by Richard Hobday, MSc, PhD
In some respects cancer is to industrialized countries today what tuberculosis was to the 18th and…

by Sarah Varcas
The second half of October is characterised by dynamic, forthright energy which requires careful…