Major Political Donors Have Access to TPP Documents. Everyone Else? Not So Much. 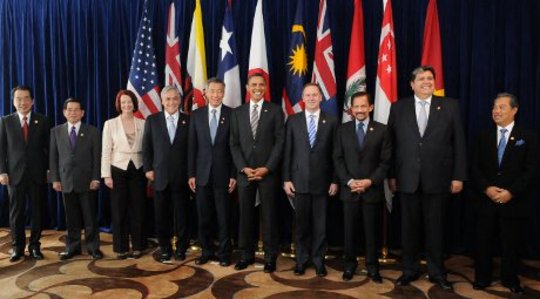 The United States is currently engaged in secret negotiations on the Trans-Pacific Partnership (TPP), a multinational trade agreement with the goal of liberalizing trade among a dozen or so countries that border on the Pacific Ocean. A draft of the TPP chapter on intellectual property that was recently published by WikiLeaks shows that the U.S. has been pushing the other countries involved in the negotiations to make their laws on copyright, patents and trademarks more agreeable to U.S. companies in the film, telecommunications, and pharmaceuticals industries, among others.

Aside from select members of the Administration, the only people with full access to the working documents on the TPP negotiations are the members of the United States Trade Representative's (USTR) trade advisory system, including the 18-member Industry Trade Advisory Committee on Intellectual Property Rights (ITAC-15). Members of ITAC-15 include representatives from businesses and industry groups like the Recording Industry Association of America, Verizon, and Pharmaceutical Research and Manufacturers of America; no public-interest groups, academics, or other non-industry experts serve on the committee.

The industry trade advisory system was created by Congress, and membership is partly based on recommendations made from senators and representatives. The organizations represented on ITAC-15 include several top political spenders, who combined have given millions of dollars to members of Congress in recent years.

Data: MapLight analysis of campaign contributions to current members of the Senate and House of Representatives from Political Action Committees (PACs) and employees of organizations represented by the Industry Trade Advisory Committee on Intellectual Property Rights (ITAC-15), from Jan. 1, 2003 - Dec. 31, 2012. Data source: OpenSecrets.org

This article firt appeared on MapLight.org by Steve Early, YES! Magazine
In the wake of a Missouri grand jury’s decision not to indict Darren Wilson, the police officer who… The Vicious Cycle of Concentrated Wealth and Political Power

by Robert Reich
If wealth and income weren’t already so concentrated in the hands of a few, the shameful… by Bill Moyers, Moyers & Company
First it was Wisconsin. Now it’s North Carolina that is redefining the term “battleground state.”… As The Middle Class Shrinks, This Tried and True Strategy Will Fail The Real Reason People Vote Against Their Self Interest?

by Will Wilkinson
If you were to write a screenplay that was turned into the movie of your life, would it be a…

by Sarah Varcas
August begins in the middle of an eclipse season which continues until the 15th. Last month was an…