Why President Obama's Compromising Path Is No Longer Enough 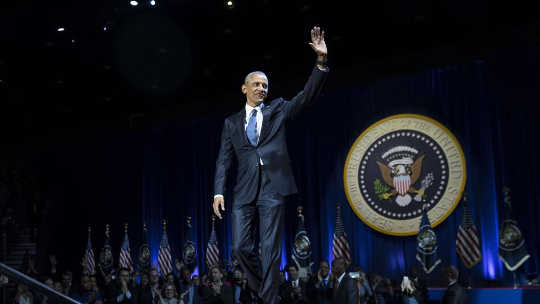 On Jan. 10, President Barack Obama delivered a farewell address to the nation in his adopted hometown of Chicago. As he often did during his presidency, Obama struck a middle path, one that had moments of real power but ultimately fell short of a full-throated defense of Democratic Party policies. In a decidedly immoderate time, with his signature domestic achievement, the Affordable Care Act, on the chopping block, Obama’s speech was a model of moderation. In a season defined by Pussygate and Russian hacking, and with an incoming billionaire’s cabinet poised to loot every entitlement and regulation not nailed down, Obama gave us the “Compromiser-in-Chief.”

In 2009, in response to Obama’s election, I wrote that Obama has always strategically framed his candidacy and presidency as evidence of the civil rights movement’s success. I argued then that Obama should use his bully pulpit to call attention to and reduce racial inequality. This farewell address was his final opportunity to plainly tell the nation why the electoral path just taken, one strewn with racism, Islamophobia and misogyny was the wrong one.

Instead, he argued yet again that racial groups are more alike than not. This argument came in a climate of sharp racial and class divides that must be acknowledged, rather than minimized by reflections on Obama’s own biography, which was characterized by a racially tolerant white family. Since Trump’s election, we have seen a sharp rise in white attacks on racial and religious minorities, and yet Obama squandered an opportunity to call out this white backlash, a response to his own presidency, by resorting to well-worn narratives that do not speak to the contemporary political and cultural moment.

Threats to our fragile ‘solidarities’

However, if the nation was in good shape, “the state of our democracy” and the fragile “solidarities” on which it was built were not, Obama asserted. Indeed, they were being threatened by “stark inequality,” the undermining of “science and reason,” and racism. On inequality, Obama stressed the need for widespread economic opportunity and a social safety net that protects all of our citizens, something he championed while in office.

As for the assault on facts and reason, a not-so-subtle jab at the president-elect, Obama argued that it “betrays the essential spirit of innovation and practical problem-solving that guided our Founders.” Admonishing those who live in self-selecting “bubbles,” where their beliefs go unchallenged, Obama quipped, “If you’re tired of arguing with strangers on the internet try to talk with one in real life.”

On racism, Obama struck a familiar and oft-played note. He framed racism primarily as a matter of “hearts” changing through empathy and interaction. This was a variation on his 2008 “A More Perfect Union” speech on race where Obama famously compared his white grandmother’s fear of black men to Rev. Jeremiah Wright’s indictment of white America for its systemic racism, using his biography as a bridge between the two.

Similarly, in Obama’s farewell address, he urged racial minorities to tie their own struggles to other oppressed groups. Those included “the middle-aged white man who from outside may seem like he’s got all the advantages, but who’s seen his world upended by economic, cultural and technological change.” As he did in 2008, Obama created a false equivalency between whites who feel a sense of disadvantage and those who are truly disadvantaged.

True, working-class white men have seen their earnings drop since the 1990s, but the unemployment rate for black America is still twice that of white America and has been for the last 40 years. Black people are killed by police at three times the rate of white people. No false equivalency between perceived and real disadvantage should mask those realities.

In watching Obama’s speech, I felt what I always feel – conflicted. On the one hand, he is a gifted intellect and orator, a deeply principled man who carried the office of the President lightly on his shoulders with grace and sometimes deep empathy. Recall his moving eulogy for Rev. Clementa C. Pinckney, one of nine killed by racist Dylan Roof, during which Obama sang the opening verse of “Amazing Grace.”

On the other hand, rather than squarely confronting the systemic and deeply embedded racism and state violence that plagues black and brown communities, Obama has too often criticized racism’s victims, rather than its perpetrators. In 2013, he chastised Morehouse graduates for the allegedly unique propensity young black men have to “make bad choices.” He has been too quick to appease conservative whites and chastise black activists – most recently, the Black Lives Matter Movement – for not acknowledging the racial progress that has been made.

As we enter the Trump era with a white supremacist chief strategist and an Attorney General nominee who thinks the Voting Rights Act is “intrusive,” I think we need a full-throated rebuttal to the nativism, Islamophobia, racism and misogyny that characterized the president-elect’s campaign.

Instead, Obama counseled his audience to “presume” a “reservoir of goodness in others,” words that ring hollow in this political climate. While Obama asked the American people to “lace up their shoes” and organize, he didn’t do the same. Instead, he praised the wisdom of our Founding Fathers, to whom the nativism and racism on display during the presidential campaign would have been familiar. He resorted to tired comparisons of inner cities and rural communities, missing an opportunity to organize his supporters, most of whom are not in rural America, for four years of resistance.

Glossing over the hard battles ahead, Obama’s farewell address seemed like a preview of the 2020 Democratic appeal to white workers. It was not a sorely needed battle cry to his black, brown, Asian and white liberal base. As he often did during his presidency, Obama missed an opportunity to swing for the fences, preferring instead to hit a line drive down the middle of our racially divided democracy. America Is More Liberal Than Its Politics Would Make You Think What Is Intolerance Fatigue and How Does It Fuel Protests?

by Bev-Freda Jackson,
Protesters remain on the streets demanding equality and justice for Black Americans. What they’re… Why Our Global ‘Age Of Rage’ Is Entering A New Phase

by Richard Youngs, University of Warwick
Protesters have recently been out in force in Russia, Poland, Hungary, northern Morocco and… How Liberal Social Media Stars Are Fighting Back

by David Craig, University of Southern California and Stuart Cunningham, Queensland University of Technology
In the aftermath of the 2016 U.S. elections, numerous accounts surfaced of nefarious content…