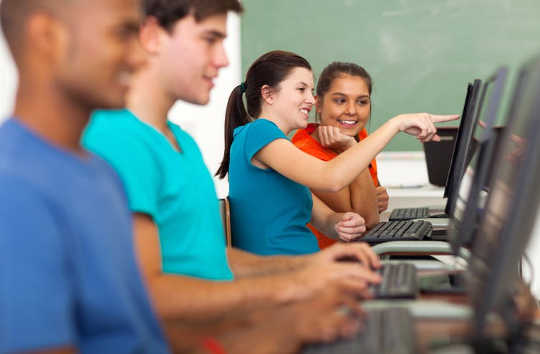 When it comes to being politically active, young people typically have a bad reputation. In democracies such as the United States and the United Kingdom, young voters tend to have low turnout rates – but there are early signs that this is changing.

For example, previous analysis by the US-based Pew Research Center indicates that young voters are, on the whole, less likely to vote than older generations were, at their age. But recent analysis by the Center for Information and Research on Civic Learning and Engagement indicates that 31% of young voters aged 18 to 29 turned out to vote in the recent US midterm elections – up from 21% in 2014.

And although 18 to 24-year-olds still had a lower turnout rate than older generations at the UK’s 2017 general election, a higher percentage of young people voted than in any other poll in the previous decade.

But, as more young people are making their voices heard through their votes, it is worth considering the teenagers who don’t yet have that opportunity. If the next generation is to have a greater presence in mainstream politics, then they need opportunities to develop their views, and be heard. My PhD research suggests that blogging about politics in school gives teenagers a chance to do just that.

For my research, I spoke with 46 young people, aged 14 to 17, in Boston, Massachusetts. Maisie – aged 14 at the time of the study – said, “the younger you are, the less respect you get for your opinions and engagement”. Likewise, Kenai – also aged 14 – said that the adults in his family tell him to “stay out of it [politics] until you can vote”.

With experiences like these, young people are often excluded from politics, and feel unheard. In my research, they expressed a need for a supportive environment to develop their political ideas - and to be heard.

Stephen, aged 14, explained that when he does express his political beliefs aloud to others in any setting, “it feels good to be able to get my own point of view out there” but that, in order to feel heard, he would “need supporters and people who understand my view to support me.”

The #NeverAgain movement, started by students at Marjory Stoneman Douglas High School on social media after a shooting at their school, inspired Generation Z to take action on gun control by organising the March for Our Lives. Leaders of the movement also organised the Road to Change tour as an effort to register and rally more young voters to fight against gun violence. 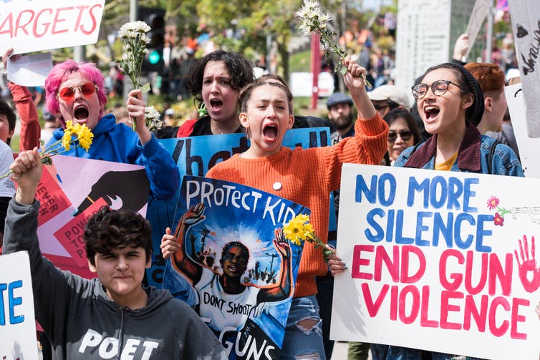 So teenagers are already using technology to discuss, organise and participate in politics before they reach voting age. But while social media can provide the opportunity for young people to share their political views, writing political blogs in school gives teenagers support from teachers, as they develop their political beliefs and thoughtfully engage with those of others.

By creating political blogs in school, teenagers can develop more confidence in their beliefs and share them with others in their classroom – and feel heard as a result. The opportunity to blog in school would address what’s known as the “audience problem” – the fact that many blogs get few views and responses means that schools ought to find responsive and engaged audiences for students’ blogs by encouraging students to read and comment on each others’ ideas.

When teachers encourage students to write these blogs it also gives students a designated space to explore their political ideas and develop their media literacy – that is, their ability to identify and understand different media and the messages they send.

When teenagers are encouraged to write their own blogs and read blogs by their classmates, they can develop and communicate their perspectives and opinions on political issues with a sense of authority and ownership, which can help them to feel more comfortable doing so outside of the classroom.

Blogs can also help teenagers learn the perspectives of others. The online platform YouthVoices combines the social networking appeal of social media with an educational aim. Students can share their beliefs through writing and online conversation with others in their schools and elsewhere, and engage with peers who hold different views.

Diana Hess, dean of the University of Wisconsin-Madison’s School of Education, found through her research that talking about political and social issues with people who hold opposing views can foster political tolerance, which can lead to better policy decisions in the future.

When teenagers engage in these discussions with their classmates, they report positive outcomes including greater engagement in school, greater interest in politics, improved critical thinking skills, and greater likelihood to become politically engaged in the future.

Political blogs by teenagers have the power to enter into and shape public discourse – and, when young people feel heard by the public and elected officials, they get a sense that their voices matter. This can carry into adulthood and inspire young people to find their voices when they reach the public stage.

In the current divisive political climate, civil discourse is needed now more than ever. The evidence suggests that encouraging teenagers to blog about their political opinions in school could go a long way to help them develop their political views, become better able to engage with and understand those of their peers and lead them to a more active political future.