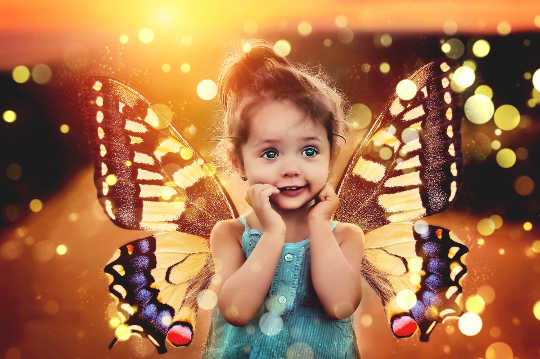 Several years ago I attended a screening of made-for-TV video clips of paranormal and supernatural phenomena. One of the more humorous segments depicted "The Magnetic Family" of the Philippines -- a family that, for some unknown reason, has their bodies magnetized to such a high degree that metal objects hold fast to their skin. The audience gasped and laughed to view paper clips, metal forks, and even a steam iron stuck to the bodies of this family, sherely by magnetic force.

After the presentation the organizer introduced me to the group, and for a joke I called myself "the Magnetic Man of Maui". The audience laughed, and the gathering soon dispersed.

As I was standing on the porch of the house where the screening had been held, a seven-year-old girl came up to me and tugged on my sleeve. I looked down to recognize her as one of several children at the viewing. Then, without a word, the child took a quarter from her hand and pressed it to my bare forearm. At first I thought the girl was trying to give me the quarter, but then, when the quarter fell to the ground, she frowned, looked up, and exclaimed, "I thought you said you were magnetic!"

A moment of laughter soon deepened to a profound realization: An innocent mind is open to all possibilities. Jesus taught "if you want to enter the Kingdom of Heaven, you must become like a little child."

We have heard that "ignorance is bliss," and we usually judge and criticize ignorant people. Yet there is a form of ignorance that serves us well, and that is ignorance of limiting beliefs. A Calvin and Hobbes cartoon declared, "It's not denial. I'm just selective about the reality I accept."

Every reality is available to you -- including ones far more wondrous than the one you now live in -- and you can easily step into a bigger universe if you but drop your beliefs of what you can't do. If you think you know it all, and what you have learned is "the only truth", you cut yourself off from all the truth grander than the one you currently know.

When I wrote The Dragon Doesn't Live Here Anymore in 1981, I was blissfully ignorant about writing and the book industry. I wrote for the sheer delight of expressing myself creatively, and I published the book myself. Within a few months the book became popular, and before long I was reprinting in volumes of 10,000 and traveling around the world to present seminars.

Then one day I walked into a bookstore where my book was being sold, and I was appalled at the huge number of books on similar subject matter -- they took up nearly a whole wall! Suddenly it occurred to me that if I had walked into the store and saw all the excellent and successful work already presented in my field, I probably would never had set pen to paper. But I was ignorant -- and that made all the difference.

Later as I got to know the publishing industry, I learned all the rules; what kinds of books sell, covers that attract attention, agents who can influence publishers, formulas to appeal to various kind of audiences, etc. etc. etc. In retrospect, I sure am glad I didn't know the rules, because most of the rules lead to the disappointing conclusion that only a small percentage of writers will succeed. Some of the other people who did not know the rules were Dale Carnegie, Norman Vincent Peale, and James Redfield. Is there a message here?

Back in 1951, running a four-minute mile was considered physiologically impossible, Then Roger Bannister ran the mile in 3:58, and within six months forty other contenders beat the unbeatable limit.

A few years ago in Australia, a 61-year-old farmer named Cliff Young entered a grueling 400 kilometer race wearing coveralls and galoshes. As the younger well-trained athletes who competed with him laughed, Cliff went on to win the race in record time -- a full day and a half before competition forty years his junior. How did Cliff do the impossible? Nobody told him he was supposed to sleep.

The word impossible begins with an imp. Get the imp out of your vision, and you will return to your original innocence. God created the world in perfection, and if we do not see perfection it is only because we are choosing to use a vision that is smaller than God's.

A friend told me, "I used to think I was a perfectionist because everywhere I looked I saw flaws. Now I realize that I was actually an imperfectionist. If I was really a perfectionist, I would see only perfection." Swami Satchidananda teaches, "We started out fine. Then we got de-fined. Now we need to get re-fined."

Perhaps children are the happiest people on the planet because they have not learned what they cannot do. They have not been taught to fear and judge and hate, and they have no concept that they must justify their existence by hard work. Lord, please keep me ignorant, so I may remember my innocence and see the world as You created it.

Book by the author of this article:

Alan Cohen is the author of many popular inspirational books, including his forthcoming book Enough Already: The Power of Radical Contentment. Join Alan for his Personal Mentorship Program beginning January 4, 2012. For more information about his books, programs, or free daily inspirational quotes via email, visit www.alancohen.com, email This email address is being protected from spambots. You need JavaScript enabled to view it., or phone 1-808-572-0001. The Power of Meaning: It Determines Our Reality

by Sarah Mane
The meaning we give to something determines our reality and life experience. If you see a grizzly…

Energy Cannot Be Destroyed; It Can Only Be Transformed

by Alan Seale
Much as we might like to, at the energy level, we can’t get rid of something we don’t like—a…