Can couples therapy bring red and blue Americans together? 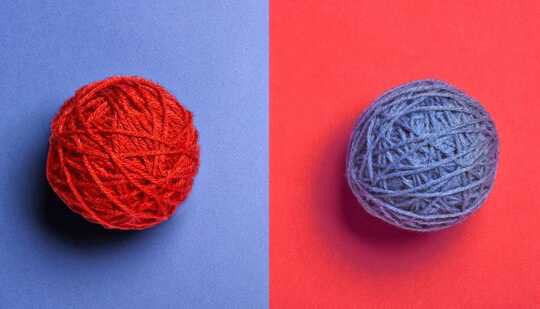 Thanks to countless recent surveys and studies, it is now a widely accepted fact that the ideological chasm between Republicans and Democrats today has grown larger than at any other time in American history, save for the post-Civil War Reconstruction era. Many believe the two parties are so bitterly divided that there’s little chance for reconciliation. But two years ago, Rob Blair, assistant professor of political science and international and public affairs at Brown University, attended a workshop that gave him hope.

The so-called Red/Blue Workshop was hosted by Braver Angels, a non-governmental organization that launched in 2016 to help Americans see each other beyond stereotypes and form community alliances. Blair says he was intrigued by the way the workshop’s facilitators guided Democrats and Republicans through exercises that encouraged introspection rather than debate, a tactic borrowed from couples therapists. Observing the exercises changed Blair’s perspective, and he wanted to know if it worked as effectively for the participants themselves.

In 2020, Blair and several other scholarly colleagues worked with Braver Angels to organize de-polarization workshops on four college campuses, and to administer one pre-workshop survey and two follow-up surveys to each workshop participant.

They found that, one week later, the students who participated in the workshop expressed 22% less direct hostility toward people in the other party, were more willing to donate money to de-polarization programs, and scored lower on a partisan implicit bias test, in which they were shown sequences of politically-related images in quick succession and asked to pair them with randomly generated words like “Republican” and “good.”

Six months later, some of the workshop’s effects had worn off, but participants still showed less implicit bias and were more willing to donate money to de-polarization initiatives than their peers in a control group that had not taken part in the workshops. Blair says that if effects of this size were extrapolated to the entire US adult population, they would be large enough to reverse roughly one third of the increase in polarization over the past three decades.

Following the release of a working paper and a policy brief detailing the findings, Blair answers questions about the study’s origins, what the results mean, and how average Americans can ease polarization in their own communities: