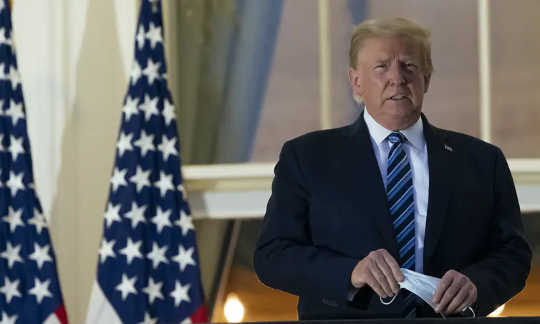 When President Donald Trump announced he was leaving the hospital after being treated for COVID-19, he sent his supporters a message: “Don’t be afraid of COVID. Don’t let it dominate your life,” he tweeted. A few hours later at the White House, he pulled off his mask in dramatic fashion for the cameras and stuffed it in his pocket.

That message on Oct. 5 2020, and his subsequent words and actions – including telling supporters at a Florida campaign rally on Oct. 12, “if you want to get out there, get out there,” and that he wanted to kiss everyone in the tightly packed audience – flew in the face of health professionals’ warnings.

Over 215,000 people have died from COVID-19 in the U.S., and the country faces a high risk of a surge in cases this fall. Wearing face masks and social distancing can help stop the virus’s spread.

If the leader deems the risk to be small, his or her supporters will be more likely to share that view. If the leader does not strictly follow rules on wearing masks and social distancing, the supporters are more than likely to follow suit.

This pattern has been confirmed in recent months by evidence that U.S. counties with more Trump voters see fewer people social distancing. It also echoes what I and other researchers have found with the politicization of climate change. 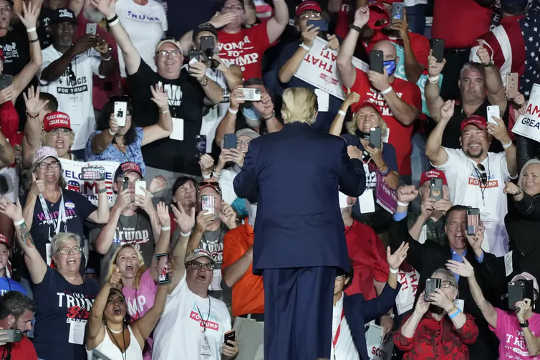 People were packed in close together for Trump’s Florida rally on Oct. 12, 2020. Many went without face masks. AP Photos/John Raoux

Climate change is another area where politics can influence the perception of risk and how to respond to it. Two decades of social science research has tracked the politicization of the issue.

While most Democrats and liberals recognize the human role in climate change and the harms it is causing, many Republicans and conservatives say they are not so sure. The conservative movement, alongside the oil industry, helped to make climate change into a politically contentious issue.

The U.S. has seen a rise in extreme weather events in recent years, and more Americans have experienced the impact of climate change firsthand. Some observers believe this increase in personal experiences can move the needle in American public opinion.

But the strong countervailing force from Trump tends to offset those effects. The more Republicans and conservatives approve of the president, the lower their perceptions of climate change risk are as the president continues to deny the evidence.

Filling a void with conspiracy theories

A parallel seems to dominate the public conversation around COVID-19 today.

Although great amounts of scientific effort have been dedicated to understanding various aspects of COVID-19, a lot remains unknown as this pandemic continues to evolve.

The virus causing COVID-19 is new and widely believed to have started in bats and jumped to humans. With the early lack of knowledge, however, various conspiracy theories were disseminated, and belief in these conspiracies still hinders mask-wearing and other behaviors that can prevent the spread of the disease.

Personal experiences, which the public often relies on to form judgments about risks, were largely absent at this initial stage of the pandemic. Confronted with such uncertainties, the public had to turn to authorities for information and assurance. 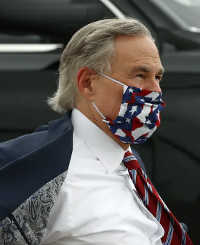 Texas Gov. Greg Abbott, who initially blocked cities from enforcing mask orders, changed his messaging after COVID-19 cases spiked in his state. Many residents had shunned mask-wearing before he shifted to promoting and then requiring it. AP Photo/Tony Guitierrez

Hope for shrinking the power of misinformation

The success of slowing the spread of COVID-19 hinges largely on people taking precautions, particularly wearing face masks and social distancing, until a safe and effective vaccine is widely available.

Tne study on attitudes toward climate change offers some hope. It found that a large number of Republicans and conservatives actually hold more unstable views about climate change over time. This instability may mean they could be more open to listening to the evidence and changing their minds.

If this is also the case with COVID-19, strategic science communications and community engagement activities may be able to make a difference and stop the rising death toll. How To Move From Worldly Complexity Into Divine Simplicity

by Pierre Pradervand
For someone on the spiritual path, one of the most beautiful discoveries is that everything becomes…