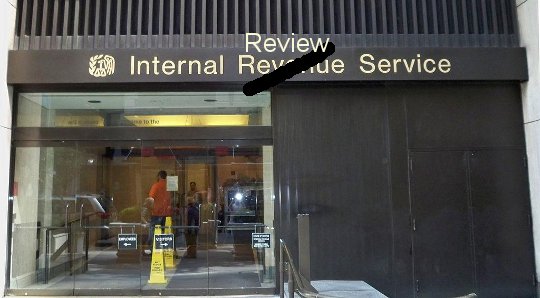 Author's Note: This article was written several years ago, and is being republished today "in honor" of "tax day".

It's that time of year... Income Tax Time. As I was looking over my income tax form, I reflected that in a `truly enlightened' society, Uncle Sam's yearly required report would contain a lot of different types of deductions.

For example, why can't we claim our inner child as a dependent? And for that matter, for those of us who are co-dependent, we should be able to claim something for co-dependents, not just dependents. Or if you have a split personality... do those count as dependents, or at least as a portion thereof? Or if you feel you are possessed... isn't that two beings residing in one body? Sounds to me like that person should be allowed to claim for two. And for that matter, a pregnant woman should be able to claim a dependent... that's obvious!

And then, what do you do if you're a walk-in? Don't you get to claim move-in expenses? And for that matter, what about channelers...don't they get to claim for providing living accommodation to their business associates?

Looking at business expenses: If you're allowed to claim professional consultation fees, then when you visit a psychic, channeler, tarot reader, etc. and ask any question concerning your business or career, that as far as I'm concerned, is a professional consultation. And actually, if you regularly consult with your Higher Self for guidance (which of course includes business as well as personal), I think you should be allowed to claim the time involved (you can't claim an expense, since we all know that Higher Self doesn't charge a fee).

If Uncle Sam really took the personal growth movement seriously, we would be allowed to claim for past-lives as well. After all, some of us are still carrying baggage and karma from those previous lives -- shouldn't we be able to claim storage costs? The wear and tear on our body from hanging on to grudges, fear and anger, would be estimated and included in cost of living expenses. It's expensive in energy and vitality to carry around all that old garbage.

And if we can claim maintenance and repairs on our cars and business equipment, what about our body? After all, it definitely gets us around and is a fantastic piece of `machinery'. It stands to reason that we can claim for our bodies also. Maintenance includes hair cuts, massage, dental cleaning, aerobics and yoga classes, jogging shoes, etc.

Travel expenses are allowed when they are for business. Now if our purpose on Earth is to grow and rediscover our Divinity, then any activity with that goal in mind, becomes tax deductible. So any astral trips or guided meditations that you have experienced lately need to be included in your expenses... Since there is at the moment no fee for astral travel, we could perhaps claim an estimate of 35 cents per mile, or whatever the government allows these days for mileage. Imagine for those of you who travel to the Pleiades regularly how that could affect your Income Tax Return.

Since we can claim entertainment expenses for business purposes, and our business is personal growth, then all movies seen, books read, videos purchased, etc. can be claimed as a part of entertaining ourselves for business reasons... After all, don't you always learn something or get some kind of message from movies and books... even if they are not necessarily metaphysical? Then of course all traveling expenses to and from movies, classes, seminars, etc., also fall into the claimable category.

Telephone bills are presently allowed for business purposes. Now what to do when telephones become obsolete because everyone is communicating telepathically? Must be a way that Uncle Sam can allow us a deduction for that... My one question though is how can we prove the length of calls. Ma Bell won't be able to clock in on this one... Oh, well, we'll have to give that one some thought.

Now that ascension is on the rise (OK, I'm allowed at least one pun in here), do we get to claim moving expenses? And how much does it cost to ascend? I would include whatever classes, workshops, trainings, etc. that have contributed to your ascension experience -- these should be claimed because they are part of the preparation for the move... Makes sense to me!

Health Insurance. First of all that is a misnomer. They need to call that sickness insurance. Because that's what it's for. Now Health Insurance payments should be the amounts we spend on such things as therapy, massage, energy healing, healthy foods, exercise and fitness, and other healing modalities -- after all those are the things that ensure our health.

Then there are donations to non-profit organizations. Now there are two things to consider here. Many people who are in business for themselves, may indeed feel that they are working for a non-profit organization... can they claim their time as a donation? And then, others who volunteer to work for boy scouts, etc., since time equals money in this society, they should be able to claim a certain amount of donation per hour of volunteer time...

When it comes to calculating your assets, you should be able to claim higher self-esteem, more self-acceptance, unconditional love, positive thinking, etc. And losses should take into account bad habits, co-dependencies, etc. Your net worth should be based on an evaluation of your level of self-esteem, self-love, self-understanding, non-judgment, etc.

I think that if Uncle Sam amended it's income tax form to include these attributes and deductions, we would quickly have a more enlightened society as everyone would want to cash in on the deductions.

Department of the Inner Treasure (a typo on the government's part, surely)

INSTRUCTIONS: When instructed to claim, add number of points to column.

When instructed to deduct, subtract number of points to column.

(add 50 points for each line unless otherwise indicated)

* prior to J.C., exemption time expired since karma (a.k.a. sins) erased at that time.

EXPENSES - THIS LIFE ONLY

Promises made (to self or others):

SUBTRACT THE MINUS POINTS FROM THE PLUS, AND VOILA, THERE IS TOTAL YEARLY INCOME. Interpretation of total points up to you. Our suggestions: If you come out in the minus we strongly advise you to do some soul-searching and inner work before your visitation rights on this planet run out.

Penalties for negative totals include reincarnation and having to go through the whole learning process again with more difficulties attached to the course. If your total is 5000 or more, are you sure you are still residing on this planet? You might want to check in daily and make sure you are still here.

By the way, you will be audited at the end of this present life. Be sure you have all your karmic information ready. Points will be granted for prior understanding of all experiences and for clear and loving records. by Marie T, Russell, InnerSelf.com
Compassion is a much-needed quality in our world. If someone is rude to you, or unfriendly, or…