Disease May Wipe Out Bananas And How To Save Them 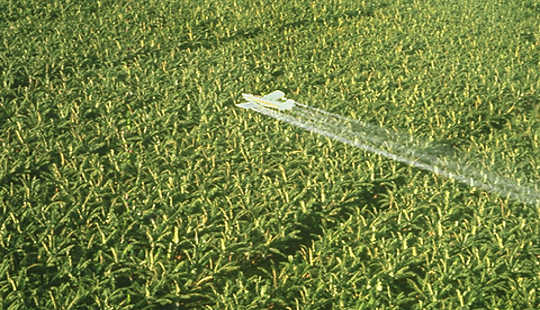 Catastrophe is looming for the banana industry. A new strain has emerged of a soil-borne fungus known as “Panama disease” which can wipe out entire plantations – and it is rapidly spreading around the world. Farmers in Australia, Latin America and across Asia and Africa all fear the worst.

The fungus is almost impossible to stop or eradicate. It moves through soil, so contamination can be as simple as infected dirt travelling from one farm to another on the sole of a shoe, or as complex as soil particles blowing on the wind across long distances – even across oceans, in theory.

Faced with huge losses to a global industry, many have called for a new strain of disease-resistant “superbanana”. However, this would be just another temporary fix. After all, the world’s most popular banana, the Cavendish, was itself the wonder fruit of its day, being introduced in the 1950s after an earlier strain of Panama disease destroyed its predecessor.

The fungi simply adapted and fought back, though, until the Cavendish also became susceptible. Panama and other diseases will continue to do so until we seriously reform how we grow and market bananas.

The banana industry is its own worst enemy. The huge farms where most exported bananas are grown are ideal for pests. These plantations are monocultures, which means they grow only bananas and nothing else. With very few shifts between crops over the years, and lots of tropical sunshine, there is an abundant and year-round supply of food for pests without any breaks, in time or space, to disrupt the supply and lower the disease pressure.

Banana producers spend a third of their income on controlling these pests, according to a study I published in 2013. Chemicals to control microscopic but deadly worms are applied several times a year. Herbicides that control weeds are applied up to eight times a year, while bananas may be sprayed with fungicides from a plane more than 50 times per year in order to control Black Sigatoka, an airborne fungus.

And those bags that are wrapped around each individual banana bunch? They’re lined with insecticides to serve as both a physical and chemical barrier to insects feeding on and damaging the skins.

All of this amounts to approximately one litre of active ingredients for every 18.6 kg box of bananas that is exported to consumers in the global north. It’s a huge, long-running problem for the industry and the new strain of Panama disease may just be the nail in its coffin.

Or maybe this is the wake-up call the export banana industry so desperately needs.

Given the way the fungus spreads, containment and quarantine are hardly long-term solutions. Some experts, especially those entrenched in the business of growing export bananas, argue that we need to breed or genetically modify a new type of banana that is resistant to the latest strain of Panama disease.

But this is harder than it sounds. Modern bananas – the tasty yellow ones – don’t exist in nature; they were bred into existence around 10,000 years ago. They reproduce asexually, which means they don’t have seeds and every banana is a genetic clone of the previous generation.

This lack of genetic variation makes breeding a new banana particularly challenging. If one Cavendish is susceptible to a disease, all others will be too. When all bananas are clones, how do you create the genetic variation from which traits for better disease resistance can be identified and nurtured?

A new banana would also have to be tasty, durable enough to withstand long voyages without bruising, and bright yellow. Looks really do trump pest-resistance. A new type of banana introduced during a previous Panama disease panic back in the 1920s was rejected by consumers for going black on the outside, even when it was ripe and sweet inside.

Today, banana growers are in a fight for survival, continuously applying newly-formulated fungicides in an effort to keep ahead of the diseases. But they are acutely aware that they are losing ground. While breeding a new banana staves off the current problem, history has already shown that this doesn’t get to the root of the problem, which is the design of the production system.

We need to ditch the massive farms. Around the world, millions of small-scale farmers already grow bananas in a more organic and sustainable way. Alongside bananas are cacao, avocado, mango, corn, orange, lemon and more. A mix of crops creates more stable production systems which rely on fewer, if any, pesticides and generates diverse income sources, handing local people greater food sovereignty. Farms where bananas are mixed in with other crops are also more resilient to climate change which is likely to hit banana-producing regions – developing countries – harder than most.

Yes, this would mean fewer bananas are grown. Sustainable agriculture simply can’t keep up with the megafarms. But if we learned to ignore the odd blemished or undersized banana, then the actual amount sent to market need not drop at all.

The farmers themselves should be okay as they’ll make up their income by producing different crops. Breaking the dominance of the banana multinationals should also distribute wealth among more farmers and empower the regions where they’re grown. As a consumer, ask yourself this: isn’t that a far better way to spend your money?