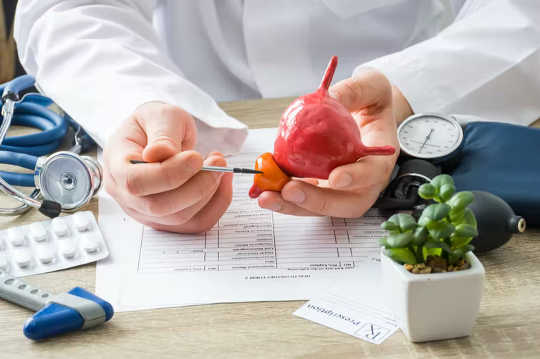 Every year, around 12,000 men in the UK die from prostate cancer, but many more die with prostate cancer than from it. So knowing whether the disease is going to advance rapidly or not is important for knowing who to treat.

Our latest study, published in European Urology Oncology, sheds some light on understanding which cancers will progress rapidly and aggressively and which won’t. Part of the answer lies with five types of bacteria.

Here at Norwich Medical School, along with our colleagues at the Norfolk and Norwich University Hospital, the Quadram Institute, and others, we have identified five types (genera) of bacteria linked to aggressive prostate cancer. These are Anaerococcus, Peptoniphilus, Porphyromonas, Fenollaria and Fusobacterium. We call these the “anaerobic bacteria biomarkers set”, or ABBS.

Bacteria genera are further subdivided into “species”. And here we found four entirely new species of bacteria, three of which are linked to the genera associated with aggressive prostate cancer.

We named two of the new bacteria species after two of the study’s funders: Porphyromonas bobii, after the Bob Champion Cancer Trust and Varibaculum prostatecancerukia, after Prostate Cancer UK.

We examined prostate tissue and urine samples from over 600 men with and without prostate cancer, and when any of the five specific anaerobic bacteria (bacteria that can grow in the absence of oxygen) were detected in patient samples, it was associated with more rapid progression of cancer to aggressive disease.

We also discovered possible mechanisms of how these bacteria may be linked to cancer, including potential effects on the metabolism of the host human cells.

Towards a better test

Current tests for prostate cancer, such as the PSA test and a biopsy, are not always able to predict which cancers will be harmful. We hope that a new test that looks for the ABBS group of bacteria will be better able to detect and screen for potentially aggressive prostate cancer. The new test will be similar to the tests developed to detect Helicobacter pylori associated with stomach cancer or HPV linked to cervical cancer.

Together with our colleagues, we are currently working on this. We are planning to develop robust, rapid tests to detect the five signature bacteria and to investigate new treatment options to remove these bacteria from the urinary tract, bladder and prostate.

Despite our exciting discovery, there are still important questions to answer, such as, are the bacteria causing prostate cancer? If so, how? Also, can we use treatment options to eradicate the bacteria to prevent the development of aggressive disease? Hopefully, we will have answers to these questions soon.