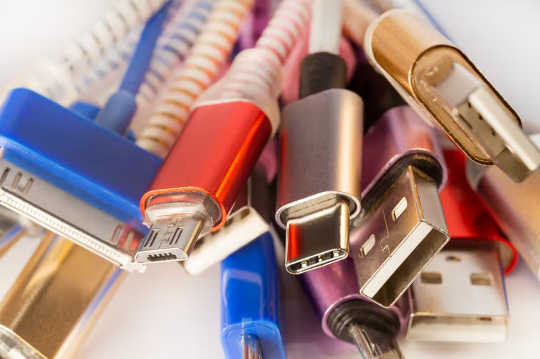 New EU rules will establish a common charger for all devices. Shutterstock

Have you ever borrowed a friend’s charger only to find it is not compatible with your phone? Or wondered what to do with the pile of cables you’ve accumulated from every device you’ve ever bought?

Such inconveniences will soon be history after the EU mandated on June 7 2022 that all small and medium-sized portable devices must be equipped with a USB-C charging port by the autumn of 2024. Laptops are due to come under the new rule roughly in autumn 2027. Unbundling will also be mandatory: chargers will no longer come with new phones, but will be purchased separately, if needed, when you buy a new phone. According to the EU’s announcement: “This law is a part of a broader EU effort to make products in the EU more sustainable, to reduce electronic waste, and make consumers’ lives easier.”

The European Commission first announced it was discussing the need for a common charger with the industry in 2009, so many manufacturers have already aligned their production with the new rule. As a result, more than 30 different models of charger have now been reduced to only three: the new standard USB-C, the mini-USB, and Apple’s Lightning charger.

A common charger should be less wasteful and cheaper, as well as making consumers’ lives easier – what could possibly be wrong with that? According to Apple, a lot. The tech company has criticised the plan to standardise, arguing the regulation may hinder future innovation. But the new rules mean it has been forced to add USB-C charging capabilities to its next generation of phones anyway. This shows the power of the EU to affect the development of markets and industries beyond its borders.

Consumers have benefited from improvements to charging technology over the years, but the concern is that a common charger requirement could stifle innovation by making it impossible to develop and roll out even better versions. Imagine if regulators had forced the installation of a CD player on laptops or even a headphone jack on mobile phones, for example. A study commissioned by Apple estimates the potential loss of value to consumers from blocking innovation in this area to be in the billions.

The Commission argues that the legislation is flexible enough to allow for innovation. It even explicitly seeks a common standard for wireless charging as soon as the technology is mature enough. This standard could be adopted by 2026, with the only constraint being that the future wireless standard is the same for all companies.

Finding a common standard is often in the interest of manufacturers. Along with helping to reduce costs, it offers the ability to compete on a level playing field. The prospect of a future common standard also encourages competition to provide the resulting product. This often results in manufacturers cooperating without government interventions, both at the national and international levels.

Indeed, USB is already a collaborative venture founded by major tech players such as Microsoft, HP and even Apple. The difference with Apple’s Lightning chargers, however, is precisely that the technology is not collaborative and it’s proprietary. Anyone can add a USB port to an electronic device, but only Apple products can use its lightning ports.

Economists call this a “pesky little brother” situation. Apple is by far the largest technology company in the world. While everyone would like their product to be compatible with Apple, it wants exclusivity. Thus, the main risk of the new regulation may not be to hinder innovation in general, but to block new exclusive Apple designs.

As such, the EU has chosen the collective gain of a common standard versus the benefit some consumers may derive from the exclusivity of Apple products. Other regulators might care more about not hurting Apple’s profits, but the EU seems to believe that this point is irrelevant to the welfare of European citizens.

On the other hand, the EU’s decision to standardise chargers is likely to have global implications. Once tech manufacturers switch to offer the common charger for European customers, it could be costly to produce a different technology for other parts of the world.

Once a product is compliant with EU regulation, firms often choose not to make a different version for the rest of the world. EU rules on health and safety, recycling, or chemical products often force global manufacturers to change their practices everywhere, for example. And when a smaller player such as the UK insists on having its own certification, it merely becomes a costly bureaucratic exercise of replication.

Take GDPR as an example. Since 2016, global websites have modified user experience to abide by the European data protection law. Companies such as Facebook and Google have adapted their business models to suit the new standards stemming from the EU Digital Market Act, drastically reducing the ways they can make money from consumer data. Companies are not obliged to apply EU law globally, they often simply find it easier to do so.

Known as the “Brussels effect”, this means lawmakers representing Europe’s 400 million people often end up deciding the standards for the rest of the world. Standardisation and regulation decisions are typically taken after an analysis of the cost and benefits of different options. In the case of GDPR, some studies estimate the innovation cost of privacy to be significant.

While US lawmakers think this cost is higher than the benefits, their preference has become largely irrelevant. The biggest technological companies are based in the US but their regulation has been delegated to the EU in practice, simply because its regulators acted first.

In the case of the common charger, the direct risk to innovation is probably minimal and consumers should be fairly happy with the new rules. The underlying issue is actually democratic: standards are often set by the regulators that act first. Others must then watch markets develop from the sidelines. Why GPS Route May Not Be The Best Route

by Alyson Chapman, Texas A&M University
As route guidance systems aim to find the shortest path between a beginning and ending point