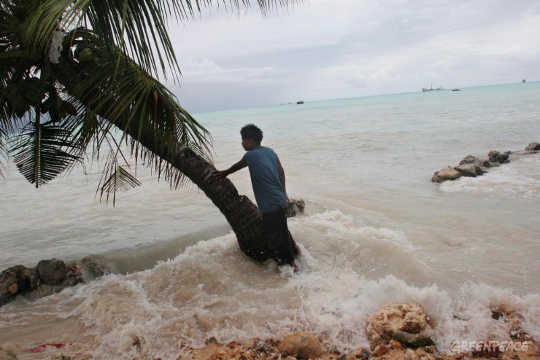 Australia is a huge continent, but a coastal nation. About 80% of Australians live within 50km of the coast, and a sea-level rise of 1.1 metres (a high-end scenario for 2100) would put about A$63 billion (in 2008 dollars) worth of residential buildings at risk.

Anyone who lives along Sydney’s northern beaches, especially in Collaroy, saw at first hand the damage the ocean can wreak on coastal properties when the coastline was hit by a severe east coast low during a king tide in June.

There are many different factors that determine which coastal homes or suburbs are most at risk of inundation or erosion, either now or in the future. In a review published as part of a series produced by the Australian Energy and Water Exchange initiative, we investigated the causes of extreme sea levels and coastal impacts in Australia, how they have changed, and how they might change even more. While significant progress has been made over recent decades, many questions remain.

The first factor to consider is the average sea level, relative to the land elevation. This “background” sea level varies, both from year to year and season to season. Depending on where you live and what the climate is doing, background sea level can fluctuate by up to about 1m. Around Australia’s northern coastline, for example, El Niño and La Niña can cause large variations in year-to-year sea levels.

On top of this are the tides, which rise and fall predictably, and whose range varies by location and phase of the moon. Most places have two tides a day, but curiously some only have one - including Perth.

On top of that again is the effect of the weather, the most notable short-term effects being storm surges and storm waves. During a surge, the storm pushes extra water onto the coast through a combination of wind pressure, wave buildup, and atmospheric pressure changes. Obviously these factors are much more localised than tides.

Extreme sea-level events, such as the one that hit Sydney in June, can arise from isolated events such as a storm surge. But more often they are due to a combination of natural phenomena that on their own may not be considered extreme. In Sydney, several factors aligned: a storm surge driven by an east coast low, an uncommon wave direction, a king tide, and a higher-than-average background sea level.

These processes already have the capacity to destroy coastal homes and infrastructure. But for the future, we also need to factor in climate change, which will raise the background sea level and may also change the frequency and intensity of storms.

What really counts is extreme sea levels, and these have been rising at roughly the same rate, meaning that the rising background sea level is a fairly good guide to how extremes are increasing. 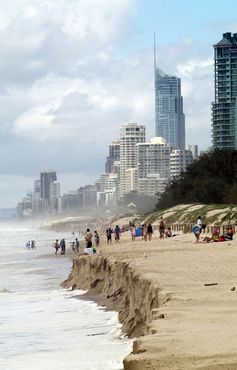 This rise will not be uniform around Australia’s coastline. The east coast is likely to experience up to 6cm more sea-level rise than the global average by 2100, because of the expected warming and strengthening of the East Australian Current.

Trends in Australia’s weather and waves are harder to predict. Satellite measurements over the past 30 years suggest that waves are getting slightly higher in the Southern Ocean, and climate models suggest that this may continue. As the tropics continue to expand with climate change, the band of westerly winds over the Southern Ocean will retreat further south and strengthen, whipping up higher waves that will travel to Australia’s southern coast as swell. On the other hand, weakening winds nearer to Australia may help to dampen down wave heights. On Australia’s eastern coast, climate models suggest fewer large wave events due to decreasing storminess in the Tasman Sea in the future.

A significant challenge we face is not having the data available to monitor the changes along our southern coastline. Australia has the longest east-west continental shelf in the world, but we have only a handful of wave buoys to measure these processes; much of the coastline is not monitored despite widespread coastal management concerns.

Our understanding of extreme sea-level change in Australia is also limited by available tide gauge coverage. Only two digital tide gauge records (in Fremantle and Fort Denison) extend back to at least the early 20th century, and records elsewhere around the coast typically span less than 50 years.

However, our investigation discovered that there is an opportunity to increase the length of available records by digitising old paper tide gauge charts. This could extend several records along our southern and tropical coastlines.

We also have major gaps in our knowledge about how our coastlines will be changed by flooding and erosion. The simple methods used to predict coastal erosion may underestimate erosion significantly, particularly in estuaries.

Given the considerable urban infrastructure located within estuaries, and the fact that they are vulnerable both to coastal storms and river floods, this is one of the many crucial questions about life on the coast that we still need to answer. by Tracey Raney and Mackenzie Gregory
Women leaders who support climate action are being attacked online with increasing regularity.