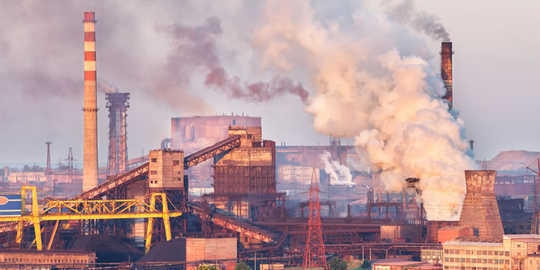 Harmful particulate matter in the atmosphere can produce birth defects and even fatalities during pregnancy, according to research in rats.

Using female rats, researchers examined the adverse health effects of exposure to fine particulate matter consisting of ammonium sulfate commonly found in many locations around the world. Researchers detected large fractions of this substance not only in Asia, but also in Houston (51 percent) and Los Angeles (31 percent).

Air pollution is a century-old problem for much of the world. According to the World Health Organization, 9 out of 10 people worldwide breathe air containing high level of pollutants, and 1 of every 9 global deaths can be attributed to exposure to air pollution, totaling over 7 million premature deaths a year.

Even in the United States, about one third of the population still live under poor air quality conditions, according to a report the US Environmental Protection Agency released in 2018.

“People typically believe that ammonium sulfate may not be terribly toxic, but our results show large impacts on female pregnant rats,” says co-lead author Renyi Zhang, a professor of atmospheric sciences and the chair in geosciences Texas A&M University. “It is unclear yet what is causing these profound effects, but we speculate that the size of nanoparticles or even the acidity may be the culprit.”

Zhang says sulfate is mainly produced from coal burning, which is a major energy source for much of the world in both developed and developing countries. Ammonium is derived from ammonia, which is produced from agricultural, automobile, and animal emissions, “so this certainly represents a major problem worldwide,” Zhang says.

“However, our results show that prenatal exposure to air pollution may not dispose offspring to obesity in adulthood,” says co-lead author Guoyao Wu, a professor of animal nutrition. “Nutrition and lifestyle are likely major factors contributing to the current obesity epidemic worldwide.”

Numerous previous studies have shown that air pollution is a serious public health threat throughout the world, with millions of people breathing air that does not meet standards the World Health Organization has set.

In addition, previous studies have shown such pollution to impair metabolic and immune systems in animal offspring, but the team’s study shows definitive proof of decreased fetal survival rates, and also shortened gestation rates that can result in smaller body weight, in addition to damage to brains, hearts, and other organs in the adult rat models.

The findings present obvious concerns and challenges on a multi-scale level, the team concludes.

“While epidemiological studies have been widely adopted to assess the health effects of air pollution, these tend to yield little insight into adverse outcomes and long-term effects,” Zhang says.

The research appears in the Proceedings of the National Academy of Sciences. Additional researchers from Texas A&M University and the University of California, San Diego contributed to the work.

Support for the work came from the Tier One Program at Texas A&M, the Robert A. Welch Foundation, and the National Institute of Environmental Health Sciences. by Keith Randall
Dogs’ ancestors in the Americas likely came from Siberia, according to a new study. The study also… by Gareth Patterson
Unless we address the health of the earth, collectively and holistically, the symptoms of our own…

by Alan Cohen
When a woman in a certain African tribe knows she is pregnant, she goes out into the wilderness…

by Marie T. Russell, InnerSelf.com
The reason I share "what works for me" is that it may work for you as well. If not exactly the way…