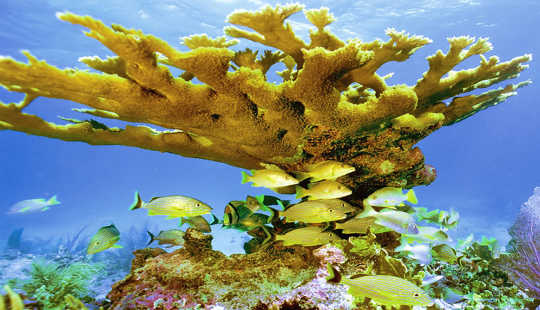 Coral genotypes can survive for thousands of years, possibly making them the longest-living animals in the world.

Researchers have determined the ages of elkhorn corals, Acropora palmata, in Florida and the Caribbean and estimated the oldest genotypes to be more than 5,000 years old. The results are useful for understanding how corals will respond to current and future environmental change.

“There are limits to how much change even these very resilient corals can handle.”

“Our study shows, on the one hand, that some Acropora palmata genotypes have been around for a long time and have survived many environmental changes, including sea-level changes, storms, sedimentation events, and so on,” says Iliana Baums, associate professor of biology at Penn State.

“This is good news because it indicates that they can be very resilient. On the other hand, the species we studied is now listed as threatened under the US Endangered Species Act because it has suffered such sharp population declines, indicating that there are limits to how much change even these very resilient corals can handle.”

Many people mistake corals for plants or even non-living rocks, but corals actually consist of colonies of individual invertebrate animals living symbiotically with photosynthetic algae.

“Previously, corals have been aged by investigating the skeletons of the colonies or the sizes of the colonies,” she says. “For example, bigger colonies were thought to be older. However, many coral species reproduce via fragmentation, in which small pieces break off from large colonies.

“These pieces look like young corals because they are small, but their genomes are just as old as the big colony from which they broke. Similarly, the big colonies appear younger than their true age because they became smaller during the process of fragmentation.”

Now, for the first time, researchers have used a genetic approach to estimate the ages of corals. The method determines when the egg and the sperm originally met to form the genome of the coral colonies. The researchers then tracked the number of mutations that accumulated in the genome since that time. Because mutations tend to arise at a relatively constant rate, the researchers were able to estimate an approximate age in calendar years of the coral genomes in the study.

The findings, published in the journal Molecular Ecology, suggest that some Acropora palmata genomes have been around for over 5,000 years.

“This was surprising, as previously, only cold-water corals were found to be older than 1,000 years,” Baums says. “Knowing the age of individuals in a population is important for understanding their population history and whether the population is increasing or decreasing. It is especially important when the population under study is threatened. by Sara LaJeunesse, Penn State
The discovery of a core set of genes involved in the responses of honey bees to multiple diseases…