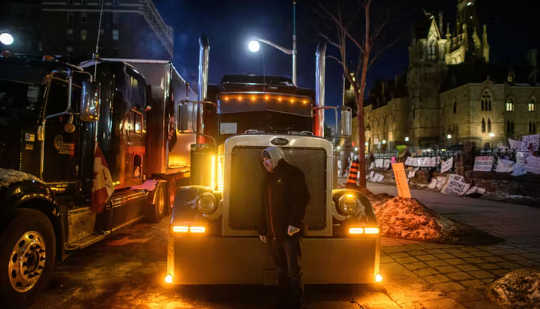 What happens when the voices of a few drown out the views of the many? Ed Jones/AFP via Getty Images

After Canadian truckers upset with vaccination mandates made their way to Ottawa, they parked their vehicles near Parliament and started making noise – lots of it – blasting their air horns day and night, disturbing the repose of citizens at home, work and in school.

The local reaction was swift. Hundreds of noise complaints prompted Ottawan police to issue tickets and declare a state of emergency.

The noise of air horns continued, undeterred. Some residents fled the city; on Feb. 7, 2022, fed-up Ottawans filed a class-action lawsuit calling for quiet.

A lawyer representing organizers of the convoy – an amalgamation of conservative activists, anti-government agitators and conspiracy theorists – claimed that blasting hundreds of 105-decibel horns was merely “part of the democratic process.”

However, Justice Hugh McLean ruled for the plaintiffs.

“Tooting a horn,” he declared, “is not an expression of any great thought I’m aware of.”

As scholars who study media and democracy, we believe the defendants are correct to argue that they should be able to protest and contribute to an ongoing debate. However, not all voices are pitched the same. Amplified by technology, it’s easy for a loud and relentless minority to dominate the soundscape and drown out all other points of view.

Controlling noise to keep the peace

States curbing noise in defense of citizens’ right to be left alone is nothing new.

In 44 B.C., Julius Caesar ruled that “no one shall drive a wagon along the streets of Rome or along those streets in the suburbs where there is continuous housing.” By the Middle Ages, most cities had a range of bells, chimes and sound signals that were used to communicate, and people who lived there understood when they should and should not be used. During the Industrial Revolution, all kinds of new noises produced by technology disrupted the peace, requiring new laws to curtail factories, steam engines and their whistles, clanging bells, and the roaring crowds that packed cities.

By the early 20th century, as automobiles started taking over the soundscapes, cities and states around the globe created new laws that balanced drivers’ need to use horns with residents’ need to be left alone in their homes.

This isn’t the first time that protesters have defied ordinances limiting horn use to get their point across. In the late 1920s and early 1930s, cities like Paris and London started fining drivers who abused klaxon horn technology – the “AHOOGA” horn – within city limits. Taxi drivers protested by defiantly honking their horns.

Noise is always a social problem when people have to share space. Democratic deliberation, which involves speaking, listening and often quietly thinking, depends on such community norms.

Amplification technology distorts conversations, making it possible for a few voices to drown out the many.

Fifty years ago, the convoy and its noise would have likely remained a local ordinance issue. Instead, the story has morphed into an international incident thanks to amplification by digital and traditional media networks.

Conservative media have been framing the truckers as a grassroots movement with overwhelming support – working-class heroes fighting the repressive state.

Fox News has devoted significant coverage to the protests, while right-wing media influencers like Ben Shapiro have latched onto the “silent minority versus the state” storyline, disseminating it to their huge followings.

Money can also amplify, and reporters have traced much of it back to international groups utilizing hacked Facebook pages. One Bangladeshi marketing firm specializing in computational propaganda easily exploited Facebook’s lax oversight – and the way its algorithm rewards divisive content – to pump up the volume on misinformation about the legality of mandates, provoking a sense of grievance that allowed it to raise millions in dark money.

The amplification has distorted the public health conversation and the reality of public opinion.

Over 80% of Canadians and 90% of Canadian truckers are vaccinated. Meanwhile, Canada’s biggest trucking alliance, the CTA, has denounced the noisy agitators: “CTA believes such actions — especially those that interfere with public safety — are not how disagreements with government policies should be expressed.”

Many truckers in Canada, including the nearly 1 in 5 who have South Asian heritage, do not feel heard. Sagroop Singh, the president of the Ontario Aggregate Trucking Association, where more than half of truckers are South Asian, stated, “We don’t even know who the organizers of this protest are. Nobody asked us if we agree with their demands.”

Many truckers think this incident has prioritized the divisive rhetoric of American and international far-right groups over their voices, diverting the conversation away from important issues for Canadian truckers, like road safety and higher wages.

In a pluralistic democracy, it is important that all voices be heard.

But the truckers who occupied Ottawa and a growing number of sites along the border using noisy intimidation aren’t merely asking to be heard; they are drowning out dialogue and stoking fears of a violent insurrection.

Freedom of speech should not only be measured by an absence of limits on who can speak: Along with the right to be heard is what filmmaker Astra Taylor has called “the right to listen.” You can’t hear other voices in a pluralistic democracy if a disruptive minority, amplified by money and noise-making technology, has the dial on their amp turned up to 11.

When the loudest voice in the room is rewarded with disproportionate media attention, it negates the rights of others. Having a conversation about ways to lower the decibels isn’t a matter of censorship. It’s about balancing a shared soundscape so that a full range of voices can be heard.