Rethinking The Relevance Of George Orwell’s 1984 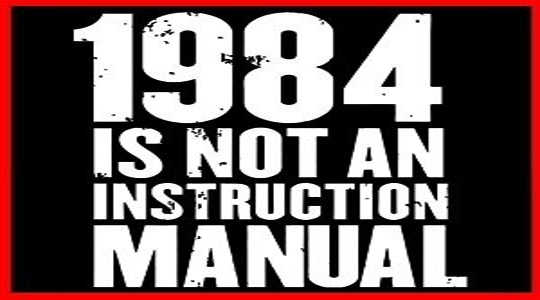 In a strange but revealing way, popular culture and politics intersected soon after Donald Trump first assumed the presidency of the United States: George Orwell’s dystopian novel, 1984, surged as the No. 1 best-seller on Amazon both in the United States and Canada.

Second, almost within hours of his presidency, Trump penned a series of executive orders that compelled Adam Gopnik, a writer for the The New Yorker, to rethink the relevance of 1984. He had to go back to Orwell’s book, he writes, “Because the single most striking thing about [Trump’s] matchlessly strange first week is how primitive, atavistic and uncomplicatedly brutal Trump’s brand of authoritarianism is turning out to be.”

In this amalgam of Trump’s blatant contempt for the truth, his blend of taunts and threats in his inaugural address and his eagerness to enact a surge of regressive executive orders, the ghost of fascism is reasserting itself, driven by a mix of fear and revenge. Unleashing promises he had made to his angry, die-hard ultra-nationalists and white supremacist supporters, Trump targeted a range of groups whom he believes have no place in American society. For now, this includes Muslims, Syrian refugees and undocumented immigrants who have become the collateral damage of a number of harsh discriminatory policies. The underlying ignorance, cruelty and punishing, if not criminogenic, intent behind such policies was amplified when Trump suggested that he intended to demolish environmental protections, resume state-sponsored torture and deny funding to those cities willing to provide sanctuary to illegal immigrants. And this was just the beginning. The financial elite now find their savior in Trump as they will receive more tax cuts, and happily embrace minimal government regulations, while their addiction to greed spins out of control. Should we be surprised?

The memory of totalitarianism, with its demand for simplistic answers, intoxication with spectacles of vulgarity and a desire for strong leaders, has faded in a society beset by a culture of immediacy, sensation and entertaining illiteracy. Under such circumstances, it is difficult to underestimate the depth and tragedy of the collapse of civic culture and democratic public spheres, especially given the profound influence of celebrity culture, a permanent war culture that trades in fear and the ever-present seductions of consumerism, which breeds depoliticization and infantilism.

Another shocking and revelatory indication of the repressive fist of neo-fascism in the Trump regime took place when Trump’s chief right-wing White House strategist, Steve Bannon, stated in an interview that “the media should be embarrassed and humiliated and keep its mouth shut and just listen for awhile…. You’re the opposition party. Not the Democratic Party. …The media is the opposition party. They don’t understand the country.” This is more than an off-the-cuff angry comment. It is a blatant refusal to see the essential role of a robust and critical media in a democracy. Such comments suggest not only a war on the press, but the very real threat of suppressing dissent, if not democracy itself. Unsurprisingly, Bannon referred to himself in the interview as “Darth Vader.” A more appropriate comparison would have been to Joseph Goebbels, the Third Reich's Minister of Propaganda.

The current onslaught of revenge and destruction produced by this updated version of authoritarianism is glaringly visible and deeply brutal, and points to a dark future in the most immediate sense. But the arrogant and unchecked presence of this neo-fascist regime has also ignited the great collective power of resistance. Hope and sanity are in the air and the relevance of mass action has a renewed urgency. Some mayors are refusing to allow their cities to be Nazified, demonstrations are taking place every day and women are marching to protect their rights. This resistance will continue to grow until it becomes a movement whose power will be on the side of justice not injustice, bridges not walls, dignity not disrespect, compassion not hate. Let’s hope they dispel Orwell’s nightmarish vision of the future in our own time.

Henry A. Giroux holds the Global TV Network Chair Professorship at McMaster University in the English and Cultural Studies Department and is a distinguished visiting scholar at Ryerson University, both in Canada. He is the author of dozens of books, and his website is HenryGiroux.com. Follow him on Twitter: @HenryGiroux.