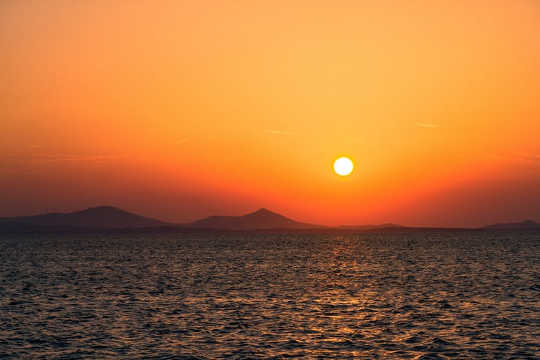 If you live in a place where the weather moves west to east, then an old proverb could help you predict the weather. TimOve/flickr

Perhaps this saying came to mind if you caught a spectacular sunrise or sunset recently.

Since biblical times and probably before, proverbs and folklore such as this developed as a way for societies to understand and foretell prevailing weather conditions.

The “red sky” proverb has endured across cultures for centuries, and modern science can explain why this is so.

What causes a red sky at sunrise and sunset?

The Sun is low on the horizon at sunrise and sunset. At these times of the day, sunlight has had to travel through more of the atmosphere to reach us. When light hits the atmosphere it is scattered, particularly when dust, smoke and other particles are in the air.

This scattering affects the blue part of the light spectrum the most. So by the time the sunlight reaches our eyes there is generally more of the red and yellow parts of the spectrum remaining.

Dust and smoke particles commonly build up in the atmosphere beneath high-pressure systems, which are generally associated with dry and settled weather.

If you’ve ever been to Darwin in the Northern Territory during the dry season (the period between May and September), you’ll know glorious red and orange sunsets are an almost daily occurrence.

This makes sense – the sky across the Top End at this time of year is often full of dust particles whipped up off the land by dry southeasterly winds, as well as smoke from bushfires burning through the landscape.

What can red sky tell us about the weather?

In areas of the world where weather systems move routinely from the west to the east, including across southern areas of Australia, the “red sky” proverb often holds true.

A red sky sunrise suggests that an area of high pressure and fine weather, with its trapped dust and other particles, has moved out towards to the east. This allows for an area of lower pressure and deteriorating weather – perhaps a cold front and band of rain – to move in from the west during the day.

On the other hand, a red sky sunset tells us the worst of the weather has now eased, with higher pressure and improving weather approaching from the west for the following day.

Across northern Australia and other areas of the tropics, the “red sky” proverb is an unreliable method to predict the weather. In these regions, weather patterns are often very localised, moving in no particular direction at all, and larger tropical weather systems usually move from east to west.

What often makes red sky sunrises and sunsets even more spectacular is the position of the Sun in the sky, relative to cloud.

When the Sun is low on the horizon, rays of light shine back up onto the underside of cloud high in the sky, reflecting back those bright orange and red colours that make it look as if

With a red sky sunrise, the eastern sky is more likely to be cloud-free with finer weather, allowing the Sun to shine upon the higher cloud moving in with the deteriorating weather from the west.

With a red sky sunset, it’s the western sky more likely to be clear, with the Sun’s rays shining up onto cloud further east.

So the next time you spot a spectacular sunrise or sunset, keep the “red sky” proverb in mind and you’ll become a pro at forecasting the weather in no time! by Nan Moss with David Corbin
In the fall of 2003, thirty-five experienced shamanic practitioners gathered together in New York…