In Search of Silence for Spiritual Revival 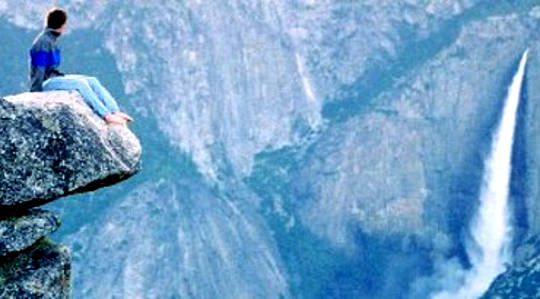 When we look into any spiritual path, we notice that silence is an imperative part of contact with the divine and the sounds of water, wind, bird song and other natural sounds seem to enhance rather than detract from the beauty of a 'divinely inspired' moment. Silence seems to be both a pre-requisite for, and an effect of, the meeting between human and deity.

However, our busy and technological life causes us to be overloaded by man-made noise, such as traffic, alarms, piped music and trivial, attention seeking conversations on mobile telephones. Even in the countryside, we hear the roar of aircraft noise above the sound of the wind, rain, birds and bees. In very stressful, noisy environments, it is difficult for us to harness our thoughts.

Getting Away From It All

The resolution to this problem is to ‘get away from it all’ and seek out a tranquil place. When we do this, we are connected with the life of the ancients who lived more healthy lives, in keeping with the sounds of nature. However, it is almost impossible to find a place of peace away from the clamor and intrusion of unwanted noise. Even public libraries are now places of chatting over newspapers and munching sandwiches.

Margaret, a busy working mother from a large city, described her experience of looking after a relative’s home in the countryside last winter. The cottage was on her own for two weeks and Margaret describes her initial reaction. "My sense of time was extended, each hour felt interminable. Within a few days, I acclimatised to the lack of stimulation and by the end of the second week, I was beginning to enjoy the tranquility that this situation offered. "

She realized that often, whilst in the midst of people, even with friends and family, she felt alone, and while cut off here without company, she felt more alive to herself than she had ever felt with others. She described being alone during this time as “a tiny death” and, when she returned to her usual life in the big city, she retained a sense of spiritual revival and described the feeling as “resurrected”. This example shows us that being in a silent place is a powerful experience and one that all people, not just the religious, should experience at regular intervals throughout their life.

Being Alone for a Few Days or Hours

Shirley described a time of being on an isolated campsite, alone for a couple of days. Her family left to visit a relative for three nights, leaving her alone. She suddenly realized that she was always “in role” as mum, doing, advising and caring and never fully pleasing herself. During this “special time” she ate, slept and took exercise when it suited her. She thought the natural sounds around her, the bird song and the patter of rain, was taking place exclusively for her and she felt as though she had never really heard properly these common natural sounds.

She says: "This time alone was a learning time for me and when I returned to my home to be with my family, I decided to take time off each week to revive myself in silence. In some way, I need to be alone to achieve the feeling of being a separate person in my own right, and having achieved it, I feel more able to be completely present for the needs of others. "

Experiencing Solitude: A Week of Silence

John Birch was inspired by a visit at a quiet time to a holy site and decided to spend a week in silence, fasting and renunciation in his bedroom to raise money for a charity that supports the Amazon Rainforest and the indigenous people who are dependent upon it. Whilst he meditated and prayed during the day, he noticed that, without distractions, he developed greater empathy for those who live without modern conveniences and comforts. He also felt deep compassion towards to those in isolation, both chosen and unchosen.

Sara Maitland, a university graduate and feminist, has written a fascinating book about “falling in love with silence”. Whilst in solitude, she describes an increase in subtle and sensitive feelings, increased bodily awareness and an intense concentration, all of which are drowned out by busyness and the work of acquisition. This emptying that she continues to long for, gave greater rather than lesser enrichment to her life.

Benefits of Silence for Children & Adults

Many of the children who live in inner city areas have never experienced silence in their lives and the discovery of silence is an excellent subject for school projects. Increasing awareness and practice of silence (in the classroom and for homework) helps to develop internal containment that modern children are lacking to their serious life-long detriment.

Silence has been found to:
•    increase sensitivity, empathy and understanding towards others,
•    increase physical awareness, mental calmness and emotional balance,
•    aid psychological maturity and emotional containment and be necessary for quality relaxation and rest.

Silence will become an important resource in future times as we learn to honor the immense power that silence offers to us.  We need greater word clarity, so we do not confuse the word “silence” with lack of conversation, being alone, or a requirement for the sensitive listening to natural, as opposed to man-made, sounds.

The Lightworkers' Circle Guide - A Workbook for Spiritual Groups
by Wendy Stokes.

Wendy Stokes is the author of 'The Lightworkers' Circle Guide - A Workbook for Spiritual Groups' published worldwide by O Books and available from Amazon. Wendy has donated her royalties from the sale of this book to the Durrell Wildlife Conservation Trust that helps protect endangered species from extinction. For more info visit: http://www.wendystokes.co.uk Why and How To Make Spirituality Your Way of Life

by Paulo Coelho
At the crossroads you can stop and think what direction to follow. But don’t spend too much time…

by Sarah Varcas
This lunar eclipse raises the issue of dependence and conditioning. In Sagittarius, it potentises…

by Michael Bianco-Splann
For many of us, our default state isn't love; it's fear. Picture, for a moment, 7 billion human…