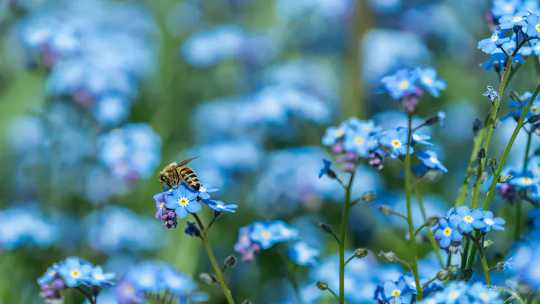 At a dinner party, or in the schoolyard, the question of favourite colour frequently results in an answer of “blue”. Why is it that humans are so fond of blue? And why does it seem to be so rare in the world of plants and animals?

We studied these questions and concluded blue pigment is rare at least in part because it’s often difficult for plants to produce. They may only have evolved to do so when it brings them a real benefit: specifically, attracting bees or other pollinating insects.

We also discovered that the scarcity of blue flowers is partly due to the limits of our own eyes. From a bee’s perspective, attractive bluish flowers are much more common.

A history of fascination 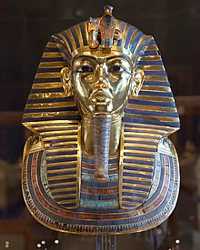 The ancient mask of the pharaoh Tutankhamun is decorated with lapis lazuli and turquoise. Roland Unger / Wikimedia, CC BY-SA

The ancient Egyptians were fascinated with blue flowers such as the blue lotus, and went to great trouble to decorate objects in blue. They used an entrancing synthetic pigment (now known as Egyptian blue) to colour vases and jewellery, and semi-precious blue gemstones such as lapis lazuli and turquoise to decorate important artefacts including the Mask of Tutankhamun.

Blue dye for fabric is now common, but its roots lie in ancient Peru, where an indigoid dye was used to colour cotton fabric about 6000 years ago. Indigo blue dyes reached Europe from India in the 16th century, and the dyes and the plants that produced them became important commodities. Their influence on human fashion and culture are still felt today, perhaps most obviously in blue jeans and shirts. 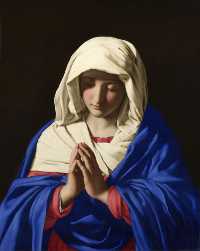 The Virgin in Prayer by the Italian painter Sassoferrato, circa 1650, highlights the vivid blue colour made with ground lapis lazuli.

Today many blues are created with modern synthetic pigments or optical effects. The famous blue/gold dress photograph that went viral in 2015 not only shows that blue can still fascinate — it also highlights that colour is just as much a product of our perception as it is of certain wavelengths of light.

Colour preferences in humans are often influenced by important environmental factors in our lives. An ecological explanation for humans’ common preference for blue is that it is the colour of clear sky and bodies of clean water, which are signs of good conditions. Besides the sky and water, blue is relatively rare in nature.

What about blue flowers?

We used a new online plant database to survey the the relative frequencies of blue flowers compared to other colours.

Among flowers which are pollinated without the intervention of bees or other insects (known as abiotic pollination), none were blue.

But when we looked at flowers that need to attract bees and other insects to move their pollen around, we started to see some blue.

This shows blue flowers evolved for enabling efficient pollination. Even then, blue flowers remain relatively rare, which suggests it is difficult for plants to produce such colours and may be a valuable marker of plant-pollinator fitness in an environment. 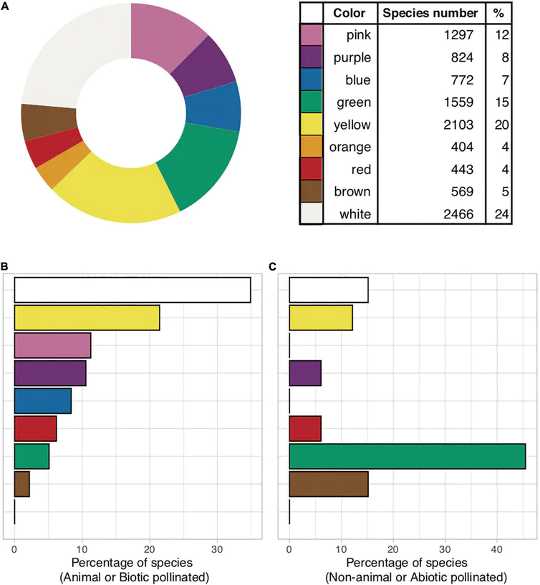 Global flower colour frequency for human visual perception (A) shows when considering animal pollinated species less than 10% are blue (B), and for wind pollinated flowers almost none are observed to be blue (C). Dyer et al., Author provided

We perceive colour due to how our eyes and brain work. Our visual system typically has three types of cone photoreceptors that each capture light of different wavelengths (red, green and blue) from the visible spectrum. Our brains then compare information from these receptors to create a perception of colour.

For the flowers pollinated by insects, especially bees, it is interesting to consider that they have different colour vision to humans.

Bees have photoreceptors that are sensitive to ultraviolet, blue and green wavelengths, and they also show a preference for “bluish” colours. The reason why bees have a preference for bluish flowers remains an open field of research. 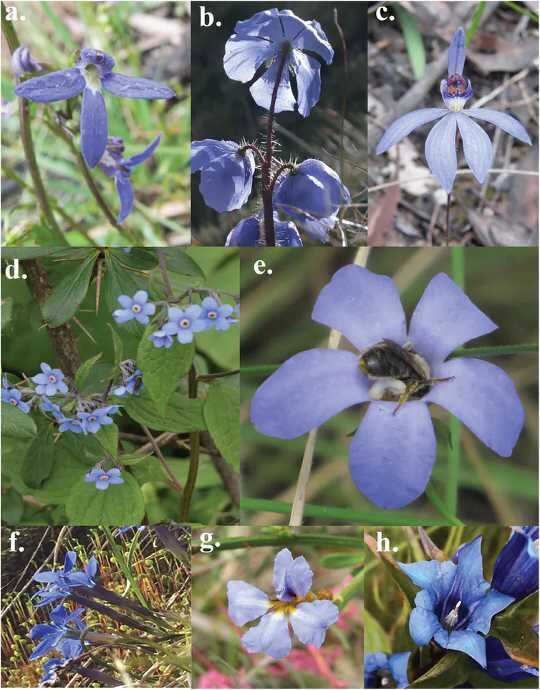 Various blue flowers from our study.

Why understanding blue flowers is important

About one-third of our food depends on insect pollination. However, world populations of bees and other insects are in decline, potentially due to climate change, habitat fragmentation, agricultural practices and other human-caused factors.

The capacity of flowering plants to produce blue colours is linked to land use intensity including human-induced factors like artificial fertilisation, grazing, and mowing that reduce the frequency of blue flowers. In contrast, more stressful environments appear to have relatively more blue floral colours to provide resilience.

For example, despite the apparent rarity of blue flower colours in nature, we observed that in harsh conditions such as in the mountains of the Himalaya, blue flowers were more common than expected. This shows that in tough environments plants may have to invest a lot to attract the few available and essential bee pollinators. Blue flowers thus appear to exist to best advertise to bee pollinators when competition for pollination services is high.

Urban environments are also important habitats for pollinating insects including bees. Having bee friendly gardens with flowers, including blue flowers that both we and bees really appreciate, is a convenient, pleasurable and potentially important contribution to enabling a sustainable future. Basically, plant and maintain a good variety of flowers, and the pollinating insects will come. Are They Watching You? Bees And Wasps Can Recognize Your Face

by Adrian Dyer
Recognizing faces is essential for how we interact in complex societies, and is often thought to be…