Finding Calmness, Comfort and Strength by Embracing the Moon 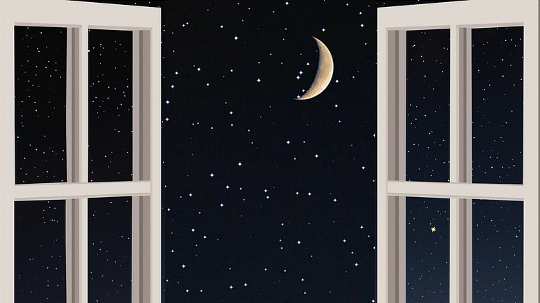 After a day of stress, of decision making, of kid's fights to referee -- when your body is tense and depression is knocking at your mind's front door...what could possibly be the ticket to relief? Where would you find the answer to needed calmness in your aura of anxiety? Could it be as simple as stepping outside to gaze at the night moon? How could something so far away in the vast sky, appear almost close enough to touch -- bringing tears of joy and a smile?

It is possible. And as those who have had their moods altered by a face to face connection with the moon can attest to, it really can quiet fears and open minds to new possibilities. It can bring nervous, rapid breathing down to a deep, contented sigh. Long term effects include improvement in concentration, energy level self-acceptance and inner peace.

Even for just a short time, sitting on the front steps outside your home or deck, or walking down a tree-filled street while looking up at the glowing object sitting steadfast in the black sky...you feel a sense of silent awe.

When Valerie was having an unsettling day with her fiancé, harsh words were tossed back and forth between them. By evening, she had started questioning whether they would even make it to their upcoming marriage. Little things became magnified. Each word was spoken in a sarcastic tone. Things changed however, the evening she reluctantly agreed to accompany him on his motorcycle for a night ride just to get fresh air.

Twenty minutes into the ride, her fiancé geared the bike off the road to a grassy knoll. Was this where he would tell her they were breaking up? she wondered. Words were about to tumble from her, admitting sadness and frustration about how poorly they had been communicating with each other lately.

Then suddenly at the top of the hill they were met by a night moon so huge, so bright that they were speechless.

"It was as if a renewed charge of energy went through us," Valerie remembers. “We hugged each other.  Everything that happened before seemed so petty and insignificant.”

Spellbound, Valerie made a wish on the moon, that this shared feeling of awe and beauty would stay with them forever.

"I knew he felt the same," she said. “We rode home in silence. What we experienced together in those moments, seemed to heal us. It showered us with light and love."

Watching the Moon Activates the "Rest and Digest" Response

Without any outside intervention, it has been shown that rapid breathing actually calms. An agitated heart rate slows down to normal. Experts in the field explain it has to do with our parasympathetic nervous system.

"Activities that are calming, such as watching the moon, can activate the parasympathetic nervous system, or the "rest and digest" response which causes humans to relax,” she says. “The body's ability to become calm activates the release of the hormone norepinephrine, which counteracts the stress response.”

She explains that during this response your breathing, heart rate, blood pressure and metabolism all slow down.  Short-term effects of inducing this response include feeling more in control, feeling refreshed.

“The long-term effects of inducing this response on a regular basis include improvement in concentration, energy level, self-acceptance, and inner peace. Your body may even become less responsive to the stress hormones. Eventually the stress hormones no longer have the same effect on the organs of your body.”

“As a meditation practitioner and teacher, I can say that it's very natural to meditate on the moon, especially during its bright moments,” Tom Von Deck says.  “Many people perform moon gazing meditation without even thinking about the concept of meditation. Some may never have even heard of meditation and they still do it.

"There are just some experiences in life that draw you in, like a patch of flowers, waves on the beach, a beautiful lover. It is so easy to become deeply absorbed in such experiences while all other cares seem to vanish to the background. The moon is a very beloved object of meditation, even to so called non-meditators.”

“The moon’s beauty and silence feels nonjudgmental to me", a young mother conveys. "It feels like the moon listens to my worries, my complaints, my anger and does not run from me. It doesn't challenge, accuse or make me feel less of a person for conveying my thoughts. I feel a sense of relief after my tirade because the moon is there, still listening."

Under the Presence of the Moon

The moon's presence whether viewed over an evening London skyline or an open field in upstate New York can bring forth similar thoughts and feelings. It can inspire. It may touch a troubled heart- or bring solace to anxiety.

Many say they are taken in by the sight and do not want to look anywhere else except the vision before them. They don't want to let anyone in, any distraction. Some people, like Tom Von Deck explained, fall into a private meditation without realizing it. It is a one-on-one connection that only you control for those moments. And even though the moon is shared by millions of others around the world, it is your moon on this night.

Chandra felt like she could not take another moment in the presence of her young children. They had been overly energetic all afternoon, playing loudly, fighting, and running throughout the house.  After dinner, Chandra's thoughts wandered to a place she knew she could escape. She imagined herself at favorite small restaurant with her best friends, sharing conversation over dinner and a tall glass of wine.

But for now, she needed air -- a few moments to herself, so she opened the back door. It was the middle of winter and a sharp chill made her shudder. The backyard was bathed in moonlight, covered by a white misty blanket of snowflakes. She sat on the step, looked up and smiled. It was as if the moon smiled back. With no one close by, she began talking softly, expounding on her frustrations, her fears, hopes and dreams.

Like a trusted friend, the moon appeared to listen in silence. There was no ridicule, no judgment. It stayed steadfast in the night sky. Shivering in the cold, she went back inside. Chandra realized her mood was different. She was basking in calmness. Her heart was filled with new thoughts and possibilities. Suddenly the sound of noisy children did not seem bother her. She watched them in a new light...happy kids expressing joy in the way children do.

Lisa TE Sonne, world travel writer and author of Buddha Meditations: The Art of Letting Go, has viewed the moon in modern cities and faraway villages, yet she still connects with the magical view close to her home:

“We live in the Santa Monica Mountains, and I love the ritual of watching the Moon rise over the mountains. It's a moment of awe and "ah!" that makes me glad to be alive. We are all connected to the moon in inspiring ways. I've met some of the humans who have walked on the moon and it thrills me that people have been there, and what the future could hold.

"Sometimes I think about how the moon choreographs the tides of the ocean, in and out, like a slow breathing of the planet, and I have a little "moon meditation" with some deep breathing.  Other times I am just enthralled in the luminous beauty of the moon…. it eclipses worries and fills you with wonders.”

How amazing it is, that the simple act of embracing the moon, allows us to connect deeply with our inner wisdom and nature. It brings forth magical moments, that can create a more meaningful and harmonizing life.

Rhythm of the Sea
by Shari Cohen.

Shari Cohen is the author of numerous books for children and adults, including the short story collection Rhythm of the Sea. She also writes feature and lifestyle stories for magazines. Her work appears in publications such as Family Circle, Woman's Day, and Whole Life Times Magazine. She is currently working on a new book with Marcelo Gindlin, Moon over Malibu - a collection of anthologies from people around the world who have had an inspiring moment occur under the night moon. Visit her website at www.sharicohen.com Why You're Not Done With Banana Bread - A Psychologist Reveals All

by Stephanie Baines
During the first pandemic lockdowns at the start of 2020, social media was flooded with pictures of… by Libby Sander
Many of us have started the year determined to be more organised: no more drawers full of plastic…