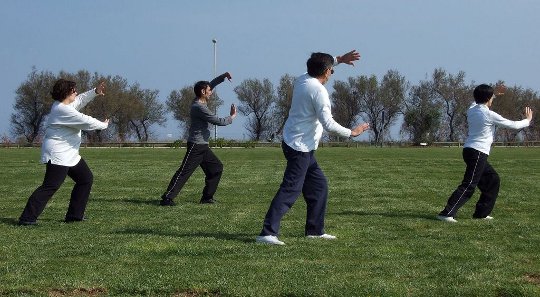 Qigong is a psychosomatic regime, which through mind, breathing, and posture regulation aids in the prevention and treatment of diseases and preserves and lengthens life.

Qigong cultivates intrinsic energy (genuine Qi) which is found naturally within all people. Traditional Chinese Medicine (TCM) holds that genuine Qi is a dynamic force, which powers all the vital functions in the human body.

There are many different forms of Qigong practice, each with its own distinct style and goals. Daoyin, also called Daoyin Massage, is a comprehensive exercise that combines specific body posture, breath regulation, and mind concentration with self massage to develop both the physical and energetic aspects of the body.

Qigong exercises are chosen to meet the specific needs and conditions of its practitioner. When a Qigong method is selected, two aspects must be taken into consideration: the general improvement of the body functions as a whole, and the treatment of an illness in particular. For example, Static Qigong, an exercise aimed at training and accumulating Qi, builds up the constitution and obtains longevity. It is excellent for improving a generally healthy body.

On the other hand, for someone who is already sick, it is desirable to pick a Qigong exercise optimal to aid in the treatment of the specific disease. For example, people having palpitations and shortness of breath due to insufficiency of the heart Qi may practice Heart Regulation Exercise (Lixin Gong) to achieve rapid therapeutic effects. In TCM, the selection and practice of Qigong according to the constitution of individuals and the nature of their illnesses is called Differential Diagnosis and Treatment.

Qigong emphasizes the cultivation of health through the removal of all blockages in the mind and body. As observed by the ancient Chinese, running water never turns stale and a door hinge never gets worm-eaten. Daoying An Qiao, an exercise found in The Yellow Emperor's Canon of Internal Medicine (Huang Di Nei Jing), consists mainly of self massage and self-controlled movements of the extremities to build up the constitution, to guide Qi and blood circulation and to control diseases.

Like all Qigong, this exercise is to a great extent superior to the passive methods of massage, acupuncture, drug medication and other therapies in its ability to mobilize the vital energy to prevent and cure diseases. Other advantages of Qigong are its simplicity and feasibility. It can be learned, with rapid and satisfactory results by reading books with illustrations.

"Dynamic" and "static" are two general terms used in Qigong to differentiate Qigong practices. Methods that require limb and body movements are referred to as dynamic Qigong. Qigong methods that require little or no physical movement are referred to as static Qigong. Qigong exercises are selected to suit the health status of the individual practitioner.

The practice of static Qigong is aimed at accumulating Qi in the Dantian, (Dantian = locations in the body that are able to store and generate Qi. The Upper, Middle, and Lower Dantian are located, respectively, between the eyebrows, at the solar plexus, and a few inches below the navel.) and with further practice, to circulate Qi throughout all of the meridians in the body. Daoyin and dynamic Qigong aims to promote the free flow of Qi in the meridians, muscles, and skeleton as well as to alleviate specific areas of physical energetic congestion that manifest as disease.

BEING RELAXED AND NATURAL

When practicing Qigong, relaxation must be both physical and mental. However, relaxation does not mean slackness or inattentiveness. Instead, it refers to a balance between tension and suppleness dominated by the conscious mind. A major goal of Qigong is to re-establish a natural harmony between being and moving which often gets lost through daily activity. In this state of harmony there will be no tension, but the energy within the body will be activated and the mind will be fully engaged.

COORDINATING THE WILL AND QI

In Qigong exercise, the will and Qi should move together. The practitioner should not put undue emphasis on breathing mechanics (i.e., gentle, fine, even and long) other than what is acquired naturally through correct practice. Abdominal respiration, which requires bulging of the belly and protruding the chest, should be avoided at the beginning.

Attention to natural motion must be given and the flow of Qi should not be forced in a particular direction. Yue Yanggui of the Qing dynasty (A.D. 1644-1911) wrote in his book Questions and Answers of Meihua (Meihua Wen Da Plan), that "the tranquility of the mind regulates the breathing naturally and, in turn, regulated breathing brings on concentration of the mind naturally". This is what is meant by, "the mind and breathing are interdependent and regular respiration produces a serene mind".

It is also not advisable to put undue emphasis on the flow of Qi. The cold, hot, tingling, distending, itching, light, heavy, floating, deep, or warm sensations that one can experience during Qigong exercise will often go along a specific route. It is improper to pursue a specific sensation intentionally, to exaggerate it, or to force oneself to gain it. When practicing Daoyin Qigong self massage, it is stipulated that the will should follow the hand manipulations so as to realize the feeling of Qi under the hands. If the feeling is not quite tangible, one should not pursue it recklessly. It is enough just to concentrate the attention on the site under the hands.

Active exercise refers to a series of procedures used to expel distracting thoughts, regulate respiration, attain proper posture, and relax both mind and body. Active exercise requires control of consciousness by means of breathing and will. It may even involve hand manipulations.

Inner health cultivation refers to the quiet state one falls into after active exercise. In this state, one feels relaxed and comfortable; the will and breathing is quiet.

Qigong should be practiced in an orderly way. When Qigong or Daoyin is practiced, priority should be given to the selection of practice methods. Be aware of the old saying, "Haste makes waste." Through arduous training, the practitioner will be able to direct Qi to follow changes in body posture, hand manipulations, respiration, and will.

It is essential to learn basic theories before beginning Qigong practice. Common errors are: eagerness to achieve quick results, trying to cure an illness overnight, and too much practice leading to fatigue, pain, soreness, or exacerbation of an illness.

Slackness, carelessness, and sloppiness in practice are also common impediments to successful Qigong practice. Those who let things drift, shop and change, go fishing for three days and dry the nets for two will be unable to develop true Qigong ability. Therefore, to succeed in Qigong exercise, one needs to adhere to the requirements and practice earnestly. Efforts should be made to overcome all objective difficulties. If one is conversant with Qigong knowledge and practices the exercises with perseverance, results are guaranteed. by Xu Xiangcai
Qigong, as an art of healing and health preservation, is thought to have originated as early as… by Matthew Haines, University of Huddersfield
High-intensity interval training (HIIT) workouts have become popular in recent years for a number… by Larry Johnson
Throughout history, peoples in many parts of the world have sought ways to develop their energetic… by Nikki Gresham-Record
Qigong has helped me understand and connect with myself as an energy being. Different forms of… by Xu Xiangcai
Qigong, as an art of healing and health preservation, is thought to have originated as early as…

by Alan Cohen
When we need to know a truth, we tend to look outside ourselves for answers, and the last place we…

Can Frustration Be Part Of A Beautiful Plan?

Honesty is the Best Policy: Sharing Thoughts and Feelings Authentically

by Sarah Varcas
May 2015 raises the issue of relationship: with ourselves, each other and our environment both near…