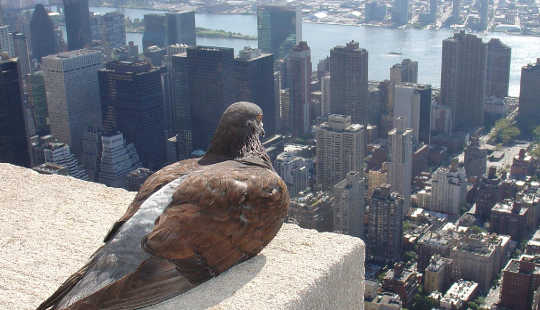 A new study of pigeons in New York City shows that levels of lead in the birds track with neighborhoods where children show high levels of lead exposure.

“Pigeons breathe the same air, walk the same sidewalks, and often eat the same food as we do. What if we could use them to monitor possible dangers to our health in the environment, like lead pollution?” says Rebecca Calisi, now an assistant professor in the department of neurobiology, physiology and behavior at the University of California, Davis, who conducted the study with undergraduate student Fayme Cai while at Barnard College, Columbia University.

Decades after it was banned from paint and gasoline, lead pollution remains a significant concern. The New York City Department of Health and Mental Hygiene carries out routine screening of children in areas of the city identified as hot spots for lead contamination.

Calisi and Cai looked at blood samples collected from 825 sick or injured pigeons brought to the city’s Wild Bird Fund rehabilitation center from 2010 to 2015. Each was identified by the zip code where it was found.

They found that the pigeons’ blood lead levels rose in summer, as they do in samples from children. Zip codes with high lead levels in pigeons also had some of the highest rates of raised levels of lead in children.

While pigeons have been used to monitor various types of pollution in some European cities, to her knowledge no one has previously correlated lead exposure in birds with exposure rates in children, Calisi says.

“This is a powerful example of how we can use pigeons to monitor the location and prevalence of pollutants,” Calisi says. “We can use these ‘rats with wings’—which are anything but—to monitor dangers to human health.”

Urban pigeons are particularly suitable for this work because they don’t fly far, typically spending their lives within an area of a few blocks, she says.

The sources of urban lead pollution aren’t clear. Lead-based paint can still be found in old buildings, but pigeons don’t spend much time indoors. Roads and especially construction sites are likely sources of particulate and airborne lead, and pigeons do pick up roadside gravel to aid in digestion. Children are also exposed to these sources of lead and can bring residues into their households by regular foot traffic.

Calisi is expanding the work to look at other pollutants, such as other heavy metals, pesticides, and fire retardants, in California cities.

The work appears in the journal Chemosphere. by Andy Fell, University of California, Davis
What do your exes have in common? A new study finds that the people we date share many… by Andy Fell, University of California, Davis
Plant biologists have discovered how sunflowers use their internal circadian clock, acting on…