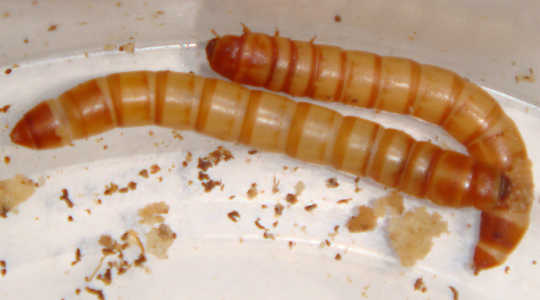 Every year, people in the US throw away 2.5 billion plastic foam cups—and that’s just a fraction of the 33 million tons of plastic that Americans throw out each year.

Less than 10 percent of that total gets recycled, and the remainder presents challenges ranging from water contamination to animal poisoning.

Enter the mighty mealworm. The tiny worm, which is the larvae form of the darkling beetle, can subsist on a diet of Styrofoam and other forms of polystyrene, according to two companion studies (first, second) coauthored by Wei-Min Wu, a senior research engineer in the department of civil and environmental engineering at Stanford University.

Microorganisms in the worms’ guts biodegrade the plastic in the process—a surprising and hopeful finding.

“Our findings have opened a new door to solve the global plastic pollution problem,” Wu says.

The papers, published in Environmental Science and Technology, are the first to provide detailed evidence of bacterial degradation of plastic in an animal’s gut. Understanding how bacteria within mealworms carry out this feat could potentially enable new options for safe management of plastic waste.

“There’s a possibility of really important research coming out of bizarre places,” says Craig Criddle, a professor of civil and environmental engineering who supervises plastics research by Wu and others. “Sometimes, science surprises us. This is a shock.”

In the lab, 100 mealworms ate between 34 and 39 milligrams of Styrofoam—about the weight of a small pill—per day. The worms converted about half of the Styrofoam into carbon dioxide, as they would with any food source.

Within 24 hours, they excreted the bulk of the remaining plastic as biodegraded fragments that look similar to tiny rabbit droppings. Mealworms fed a steady diet of Styrofoam were as healthy as those eating a normal diet, Wu says, and their waste appeared to be safe to use as soil for crops.

Researchers, including Wu, have shown in earlier research that waxworms, the larvae of Indian mealmoths, have microorganisms in their guts that can biodegrade polyethylene, a plastic used in filmy products such as trash bags. The new research on mealworms is significant, however, because Styrofoam was thought to have been non-biodegradable and more problematic for the environment.

Researchers led by Criddle, a senior fellow at the Stanford Woods Institute for the Environment, are collaborating on ongoing studies with the project leader and papers’ lead author, Jun Yang of Beihang University in China, and other Chinese researchers.

Together, they plan to study whether microorganisms within mealworms and other insects can biodegrade plastics such as polypropylene (used in products ranging from textiles to automotive components), microbeads (tiny bits used as exfoliants), and bioplastics (derived from renewable biomass sources such as corn or biogas methane).

As part of a “cradle-to-cradle” approach, the researchers will explore the fate of these materials when consumed by small animals, which are, in turn, consumed by other animals.

Mealworms Of The Sea

Another area of research could involve searching for a marine equivalent of the mealworm to digest plastics, Criddle says. Plastic waste is a particular concern in the ocean, where it fouls habitat and kills countless seabirds, fish, turtles, and other marine life.

More research is needed, however, to understand conditions favorable to plastic degradation and the enzymes that break down polymers. This, in turn, could help scientists engineer more powerful enzymes for plastic degradation, and guide manufacturers in the design of polymers that do not accumulate in the environment or in food chains.

Criddle’s plastics research was originally inspired by a 2004 project to evaluate the feasibility of biodegradable building materials. That investigation was funded by the Stanford Woods Institute’s Environmental Venture Projects seed grant program. It led to the launch of a company that is developing economically competitive, nontoxic bioplastics. by Rob Jordan, Stanford University
This past July was the hottest single month in Earth’s recorded history, but warming isn’t the only… by Rob Jordan, Stanford University
What will the world look like as rhinos, tigers, and other large animals go extinct?