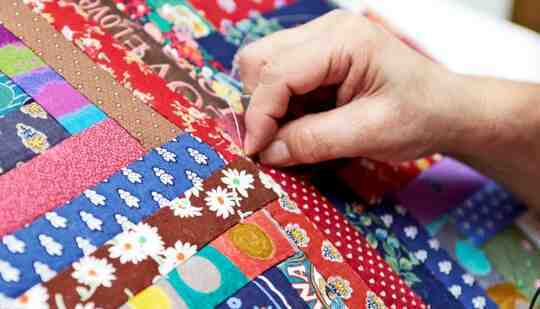 A new algorithm automates the notoriously complicated—and often frustrating—process of figuring out the order of steps in advanced quilting patterns.

That lets quilters focus on design and creativity, instead.

Stanford University computer science graduate student Mackenzie Leake has quilted since age 10, but she never imagined the craft would be the focus of her doctoral dissertation. Included in that work is new prototype software that can facilitate pattern-making for a form of quilting called foundation paper piecing, which involves using a backing made of foundation paper to lay out and sew a quilted design.

Developing a foundation paper piece quilt pattern—which looks similar to a paint-by-numbers outline—is often non-intuitive. There are few formal guidelines for patterning and those that do exist are insufficient to assure a successful result.

“Quilting has this rich tradition and people make these very personal, cherished heirlooms but paper piece quilting often requires that people work from patterns that other people designed,” says Leake, a member of the lab of Maneesh Agrawala, professor of computer science and director of the Brown Institute for Media Innovation at Stanford.

“So, we wanted to produce a digital tool that lets people design the patterns that they want to design without having to think through all of the geometry, ordering, and constraints.” 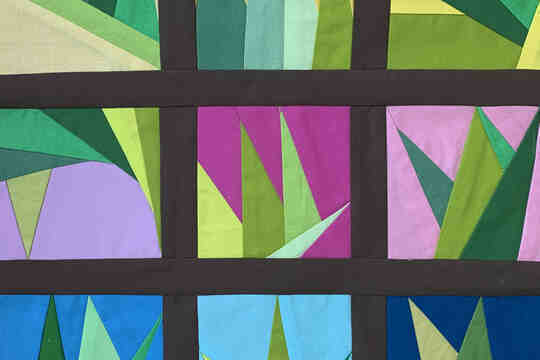 Each of the blocks in this quilt were designed using an algorithm-based tool developed by Stanford researchers. (Credit: Mackenzie Leake)

In describing the allure of paper piece quilts, Leake cites the modern aesthetic and high level of control and precision. The seams of the quilt are sewn through the paper pattern and, as the seaming process proceeds, the individual pieces of fabric are flipped over to form the final design. All of this “sew and flip” action means the pattern must be produced in a careful order.

Poorly executed patterns can lead to loose pieces, holes, misplaced seams, and designs that are simply impossible to complete. When quilters create their own paper piecing designs, figuring out the order of the seams can take considerable time—and still lead to unsatisfactory results.

“The biggest challenge that we’re tackling is letting people focus on the creative part and offload the mental energy of figuring out whether they can use this technique or not,” says Leake, the paper’s lead author. “It’s important to me that we’re really aware and respectful of the way that people like to create and that we aren’t overautomating that process.”

This isn’t Leake’s first foray into computer-aided quilting. She previously designed a tool for improvisational quilting, which she presented at the human-computer interaction conference CHI in May.

Developing the algorithm at the heart of this latest quilting software required a substantial theoretical foundation. With few existing guidelines to go on, the researchers had to first gain a more formal understanding of what makes a quilt paper piece-able, and then represent that mathematically.

They eventually found what they needed in a particular graph structure, called a hypergraph. While so-called “simple” graphs can only connect data points by lines, a hypergraph can accommodate overlapping relationships between many data points. (A Venn diagram is a type of hypergraph.) The researchers found that a pattern will be paper piece-able if it can be depicted by a hypergraph whose edges can be removed one at a time in a specific order—which would correspond to how the seams are sewn in the pattern.

The prototype software allows users to sketch out a design and the underlying hypergraph-based algorithm determines what paper foundation patterns could make it possible—if any. Many designs result in multiple pattern options and users can adjust their sketch until they get a pattern they like. The researchers hope to make a version of their software publicly available this summer.

“I didn’t expect to be writing my computer science dissertation on quilting when I started,” says Leake. “But I found this really rich space of problems involving design and computation and traditional crafts, so there have been lots of different pieces we’ve been able to pull off and examine in that space.”

The researchers will present their paper at the computer graphics conference SIGGRAPH 2021 in August. Additional coauthors are from the University of California, Berkeley and Cornell University. by Jane Duncan Rogers
Let’s face it, there is never going to be a good time to address anything to do with dying, death…

Are You Ignoring Your Inner Wound Via Cynicism Or Spiritual Bypass?

by Charles Eisenstein
I am not some enlightened being trying to guide you on a journey he has already completed. That is…