This Houseplant Sucks Cancer-linked Chemicals From The Air 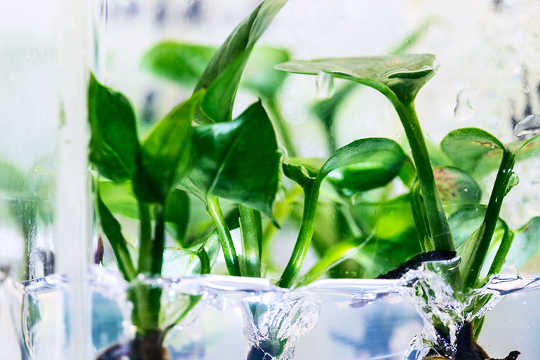 Researchers have genetically modified a common houseplant—pothos ivy—to remove chloroform and benzene from the air around it.

We like to keep the air in our homes as clean as possible, and sometimes we use HEPA air filters to keep offending allergens and dust particles at bay. But some hazardous compounds are too small for these filters to trap.

Small molecules like chloroform, which is present in small amounts in chlorinated water, or benzene, which is a component of gasoline, build up in our homes when we shower or boil water, or when we store cars or lawn mowers in attached garages. Both benzene and chloroform exposure have been linked to cancer.

The modified plants express a protein, called 2E1, that transforms these compounds into molecules that the plants can then use to support their own growth.

“People haven’t really been talking about these hazardous organic compounds in homes, and I think that’s because we couldn’t do anything about them,” says senior author Stuart Strand, who is a research professor in the civil and environmental engineering department at the University of Washington. “Now we’ve engineered houseplants to remove these pollutants for us.”

A ‘green liver’ outside the body

The team decided to use a protein called cytochrome P450 2E1, or 2E1 for short, which is present in all mammals, including humans. In our bodies, 2E1 turns benzene into a chemical called phenol and chloroform into carbon dioxide and chloride ions. But 2E1 is located in our livers and is turned on when we drink alcohol. So it’s not available to help us process pollutants in our air.

“We decided we should have this reaction occur outside of the body in a plant, an example of the ‘green liver’ concept,” Strand says. “And 2E1 can be beneficial for the plant, too. Plants use carbon dioxide and chloride ions to make their food, and they use phenol to help make components of their cell walls.”

The researchers made a synthetic version of the gene that serves as instructions for making the rabbit form of 2E1. Then they introduced it into pothos ivy so that each cell in the plant expressed the protein. Pothos ivy doesn’t flower in temperate climates so the genetically modified plants won’t be able to spread via pollen.

“This whole process took more than two years,” says lead author Long Zhang, a research scientist in the civil and environmental engineering department. “That is a long time, compared to other lab plants, which might only take a few months. But we wanted to do this in pothos because it’s a robust houseplant that grows well under all sort of conditions.”

The researchers then tested how well their modified plants could remove the pollutants from air compared to normal pothos ivy. They put both types of plants in glass tubes and then added either benzene or chloroform gas into each tube. Over 11 days, the team tracked how the concentration of each pollutant changed in each tube.

In order to detect these changes in pollutant levels, the researchers used much higher pollutant concentrations than are typically found in homes. But the team expects that the home levels would drop similarly, if not faster, over the same time frame.

Plants in the home would also need to be inside an enclosure with something to move air past their leaves, like a fan, Strand says.

“If you had a plant growing in the corner of a room, it will have some effect in that room,” he says. “But without air flow, it will take a long time for a molecule on the other end of the house to reach the plant.”

The team is currently working to increase the plants’ capabilities by adding a protein that can break down another hazardous molecule found in home air: formaldehyde, which is present in some wood products, such as laminate flooring and cabinets, and tobacco smoke. 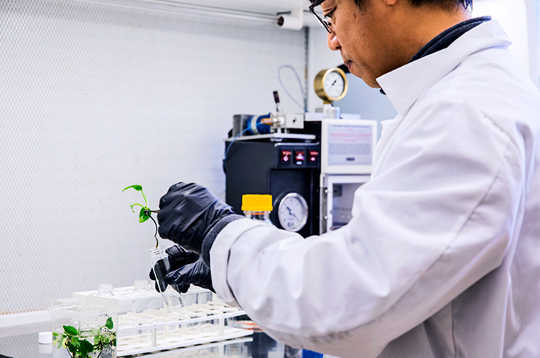 Long Zhang puts a pothos ivy plant into a glass tube to test its ability to break down benzene or chloroform. (Credit: Mark Stone/U. Washington)

“These are all stable compounds, so it’s really hard to get rid of them,” Strand says. “Without proteins to break down these molecules, we’d have to use high-energy processes to do it. It’s so much simpler and more sustainable to put these proteins all together in a houseplant.”

The National Science Foundation, Amazon Catalyst at UW, and the National Institute of Environmental Health Sciences funded the research. 5 Things About Technology That Give Kids The Creeps