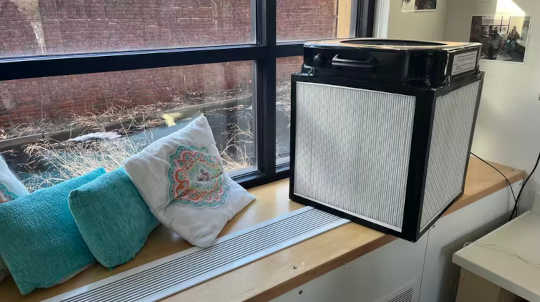 A do-it-yourself air purifier in use in a classroom. Douglas Hannah, CC BY-ND

One afternoon, a dozen Arizona State University students gathered to spend the morning cutting cardboard, taping fans and assembling filters in an effort to build 125 portable air purifiers for local schools. That same morning, staff members at a homeless shelter in Los Angeles were setting up 20 homemade purifiers of their own, while in Brookline, Massachusetts, another DIY air purifier was whirring quietly in the back of a day care classroom as children played.

The technology in all three cases – an unassuming duct tape-and-cardboard construction known as a Corsi-Rosenthal box – is playing an important part in the fight against COVID-19. The story of how it came to be also reveals a lot about communities as sources of innovation and resilience in the face of disasters.

A simple technology with a big effect

As it became clear that COVID-19 was spread through airborne transmission, people started wearing masks and building managers rushed to upgrade their ventilation systems. This typically meant installing high-efficiency HEPA filters. These filters work by capturing virus-laden particles: Air is forced into a porous mat, contaminants are filtered out, and clean air passes through.

The efficacy of a building’s ventilation system is governed by two factors, though, not just the quality of the filters. The amount of air moved through the ventilation systems matters as well. Experts typically recommend five to six air changes per hour in shared spaces, meaning the entire volume of air in a room is replaced every 45 minutes. Systems in many older buildings can’t manage this volume, however.

Portable air filters are an option for augmenting ventilation systems, but they typically cost hundreds of dollars, which puts them out of range for schools and other public spaces that face budget constraints.

This is where the Corsi-Rosenthal box comes in. It’s a cube consisting of four to five off-the-shelf furnace filters topped by a standard box fan blowing outward. Once sealed together with tape, it can sit on a floor, shelf or table. The fan draws air through the sides of the cube and out the top. The units are simple, durable and easy to make, and are more effective than simply placing a single filter in front of a box fan. It usually takes 40 minutes, minimal technical expertise and US$60 to $90 in materials that are available from any home supply store.

Despite this simplicity, though, these homemade units are extremely effective. When used in a shared space like a classroom or hospital ward, they can supplement existing ventilation and remove airborne contaminants, including smoke and virus-laden particles. A raft of recent peer-reviewed research has found portable air purifiers can dramatically reduce aerosol transmission. Other preprint and under-review studies have found Corsi-Rosenthal boxes perform as well as professional units at a fraction of the cost.

Origins of the Corsi-Rosenthal box

The formal story of the Corsi-Rosenthal box began in August 2020, when Richard Corsi, an air quality expert and now dean at the University of California, Davis, pitched the idea of building cheap box-fan air filters on Twitter. Jim Rosenthal, the CEO of a Texas-based filter company, had been playing around with a similar idea and quickly built the first prototype.

Within days, tinkerers and air quality engineers alike were constructing their own Corsi-Rosenthal boxes and sharing the results on social media. A vibrant conversation emerged on Twitter, blending sophisticated technical analysis from engineers with the insight and efforts of nonspecialists.

By December, hundreds of people were making Corsi-Rosenthal boxes, and thousands more had read press coverage in outlets like Wired. In different corners of the world, people tweaked designs based on the availability of supplies and different needs. Their collective improvements and adaptations were documented by dedicated websites and blogs, as well as news reports.

In some cases, design tweaks proved to be influential. In November 2020, for example, a homeowner in North Carolina discovered an issue with air being drawn back in through the corners of the most commonly used square fans. Subsequent testing by air quality experts showed that adding a shroud to the fan increased efficiency by as much as 50%.

Analyzing social media and news coverage gives a sense of the scale of the Corsi-Rosenthal box phenomenon. As of January 2022, more than 1,000 units were in use in schools, with thousands more in homes and offices. More than 3,500 people had used the hashtag #corsirosenthalbox on Twitter, and tens of thousands more contributed to the online conversation. News articles and explainer videos on YouTube had collectively accumulated more than 1.9 million views.

Communities as sources of innovation

The story of the Corsi-Rosenthal box is part of a broader story of the grassroots response to the COVID-19 pandemic. The early days of the pandemic did more than just take a terrible toll on people. They also galvanized a massive entrepreneurial effort, with tens of thousands of everyday citizens lending their hands to design and produce the critical medical supplies and personal protective equipment that was suddenly needed.

My research team has been tracking these efforts. Through dozens of interviews and months of archival research, we’ve built a database of more than 200 startups – formal and informal, nonprofit and for-profit – whose activities ranged from designing oxygen concentrators to 3D printing face shields to building UV disinfection rooms. The picture of innovation that emerges is a far cry from the traditional lab coats and middle managers image that is commonly associated with new technologies.

First, few of the innovations we’ve tracked were actually invented by a single person, or even a single team. Rather, they were the joint project of broad networks of individual contributors from different backgrounds and organizations. This breadth is important because it brings more knowledge and more diverse perspectives. It can also be helpful for tapping existing knowledge. For example, as Corsi-Rosenthal boxes gained traction, the community was able to draw on earlier iterations that had been developed to help with wildfire smoke.

Second, the innovation process lacked hierarchical control. There was no single person directing where or how the technology was used. This lack of control made it easier to experiment and adapt to local conditions. One example is the development of oxygen concentrators for use in hospitals in India. Realizing that existing Western technologies failed frequently in the more humid operating environment typical of India, teams of innovators rallied to develop and share improved open-source designs.

Third, these communities shared knowledge online. This allowed individual contributors to communicate directly and share ideas, which helped knowledge spread rapidly through the network. It also meant that knowledge was more readily accessible. The detailed designs and test results from air quality engineers working on Corsi-Rosenthal boxes were readily available to anyone in the community.

Also, most of the organizations we tracked used Facebook, Twitter and Slack as tools to manage collaboration within and between organizations. As I and others have argued, this gives grassroots innovation tremendous promise – especially in a world where large-scale disruptions like a pandemic are increasingly common.

Despite this promise, there are areas in which grassroots innovation communities falter. One challenge is a lack of technological sophistication and resources. While some of the communities in our study produced remarkably complex devices, the greatest contribution was in far simpler products like face shields and surgical gowns.

Then there are rules and regulations. Even when grassroots communities can produce safe and effective innovations, existing rules may not be ready to receive them. Some hospitals were unable to accept personal protective equipment provided by the community during the pandemic because of inflexible procurement policies, and today some schools continue to prohibit Corsi-Rosenthal boxes.

A final issue is sustaining effort. While grassroots communities were vital to allowing hospitals and medical facilities to remain functioning during the early days of the pandemic, many of the efforts that depended on volunteer labor eventually ran out of steam.

What this means for the future

As the second anniversary of the U.S. declaration of emergency approaches, a key lesson the world has learned is the importance of investing in indoor air quality, for example through monitoring and improved ventilation and filtration. And the value of ventilation as a noninvasive public health tool is even greater as mask mandates wane.

Another, broader lesson is the power of grassroots innovation and citizen engineering to develop these technologies. The story of the Corsi-Rosenthal box, like the thousands of other grassroots innovations developed during the pandemic, is fundamentally about people taking the welfare of their communities into their own hands. The most popular tweet shared about Corsi-Rosenthal boxes was from a 14-year-old aspiring engineer in Ontario offering to build and donate boxes to anyone in need.