How To Decrease The Risk Of Premature Death 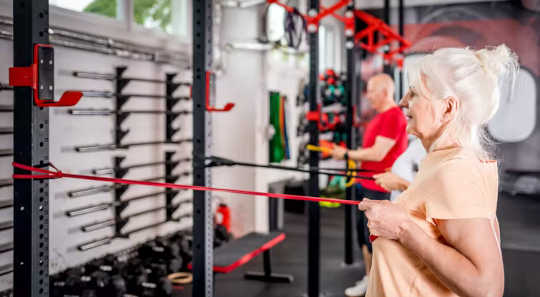 It’s important to do resistance training alongside other types of exercise. Leszek Glasner/ Shutterstock

There’s long been evidence that moderate aerobic exercise (think walking, running, or cycling) are good for your lifelong health and well-being. Research even shows us more active people also tend to live longer, healthier lives with lower rates of disease – including cancers, diabetes and cardiovascular disease.

But what about resistance exercise – like lifting weights? While it’s thought these kinds of exercises are probably also good for health and longevity, less evidence has existed showing the benefits. But a recent study now shows that 30-90 minutes of resistance training a week is enough to potentially decrease risk of premature death from all causes by 10%-20%.

The team of researchers from three universities in Japan conducted a meta-analysis – meaning they pooled data from 16 separate studies looking at longevity, disease risk and resistance exercise. This allowed them to look at tens of thousands of participants altogether.

They found that 30-90 minutes of resistance exercise per week was optimal for lowering overall risk of dying from all causes. More strikingly, they also found regularly performing more than three hours of strength training per week could actually increase risk of premature death by about 10%.

The findings of this study are largely in line with what the NHS already recommends. According to them, adults aged 19 to 64 should aim to do two strength training sessions per week in order to benefit their overall health. But given public health guidelines are often a compromise between what’s optimal to perform and what people won’t be put off by, it’s promising to see that the optimal amount of strength training per week to benefit health so closely mirrors current guidelines.

There are a couple of limitations with this study. While the number of people pooled across the studies is large, the number of studies actually included in the analysis is still quite small. The participants of the study were also primarily North American or western European – so the findings may not be as relevant for people of many different ethnic backgrounds. Another limitation is that most of the studies included in the analysis relied on questionnaires of large groups of people asking about their exercise habits. The problem with this is that people may overestimate or lie about the amount of exercise they actually do.

Strength training is good for your overall health in many more ways than you might expect.

Besides the obvious – that it makes you stronger, for example – researchers are beginning to learn more about the role certain hormones and cells that are released during resistance exercise play in our body.

For example, myokines are hormones that our muscles release in response to all sorts of stimuli – including exercise. Circulating around the body, myokines are able to regulate metabolism, as well as liver, brain and kidney function. One specific myokine I’ve spent a career studying is myostatin. While we know that it regulates muscle size, there’s all sorts of new evidence that it also influences metabolism and fat cell growth – which all play a role in helping us keep healthy and live longer.

Research also shows us that resistance exercise releases tiny cell fragments from our muscle cells called “extracellular vesicles”. These allow our muscle tissues to better communicate with each other. While we don’t entirely know what they’re doing, we do know that they’re carrying RNA (a molecule similar to DNA), proteins and even mitochondria (which help convert food into energy our cells can use) from cell to cell. So although we aren’t entirely clear of their function yet, this is just another reminder of the influence our muscles have on many aspects of our health and body function.

But while this study has shown strength training to be beneficial for preventing premature death from many harmful diseases, that doesn’t mean you should only strength train. It’s important to also do moderate intensity aerobic exercise (such as walking, jogging or cycling) most days of the week to optimise your chances of living a longer, healthier life. by Bradley Elliott, University of Westminster
There have been some noteworthy examples of successful human aging in the press recently. by Bradley Elliott, University of Westminster
If you have ever been nervous about something that is about to happen, then you may have felt the…