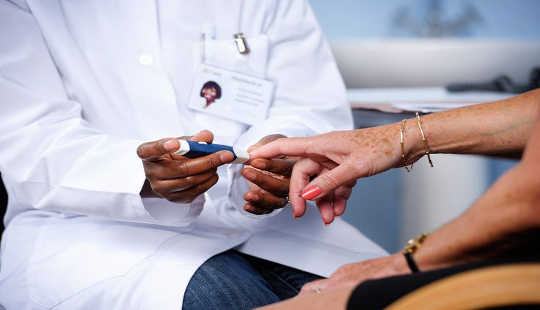 Scientists have uncovered a link between emotional stress and diabetes, with roots in the brain’s ability to control anxiety.

The research establishes a metabolic chain reaction that starts with low inhibition—or attention control. This leaves a person vulnerable to tempting or distracting thoughts or activities.

“The novel part of our study was establishing the pathway from inhibition to anxiety to inflammation to diabetes.”

Previous studies have shown that such vulnerability can lead to more frequent anxiety, and anxiety is known to activate a metabolic pathway responsible for the production of pro-inflammatory cytokines, signaling proteins that include interleukin-6 (IL-6).

Along with cognitive tests that measured attention control, the study measured levels of both blood glucose and IL-6 in more than 800 adults. IL-6 is a protein the body produces to stimulate immune response and healing. It is a biomarker of acute and chronic stress that’s associated with a greater likelihood of diabetes and high blood glucose.

The adults with low inhibition were more likely to have diabetes than those with high inhibition due to the pathway from high anxiety to IL-6. The results were the same no matter how subjects performed on other cognitive tests, like those for memory and problem-solving.

Researchers have suspected a link between anxiety and poor health, including diabetes, for many years but none have detailed the biological pathway responsible, says Kyle Murdock, the study’s lead author and a postdoctoral research fellow in psychology at Rice University.

From inhibition to inflammation

He says the study, published in Psychoneuroendocrinology, takes a deeper look at how inflammation bridges the two.

“The literature shows individuals with poor inhibition are more likely to experience stressful thoughts and have a harder time breaking their attention away from them,” Murdock adds. “That made me wonder if there’s a stress-induced pathway that could link inhibition with inflammation and the diseases we’re interested in, such as diabetes.

“Plenty of research shows that when individuals are stressed or anxious or depressed, inflammation goes up,” he says. “The novel part of our study was establishing the pathway from inhibition to anxiety to inflammation to diabetes.”

Murdock works in the Rice lab of Christopher Fagundes, assistant professor of psychology. The Fagundes lab investigates processes that happen along the border of psychology and physiology, and how those processes affect overall health and potential treatments.

The data came from a Midlife Development in the United States study of 1,255 middle-aged adults whose cognitive abilities were tested two years apart. More than 800 of those also underwent blood tests to check IL-6 and glucose levels.

The researchers found not only the positive link between inhibition and diabetes, but the absence of a link between other cognitive functions and the disease. They also determined that the pathway only went in one direction: Inflammation never appeared to affect inhibition.

Murdock says a year as a clinical psychology intern at the Oregon Health and Science University, where he studied with coauthor and psychologist Danny Duke, led the researchers to think there could also be a feedback loop at play in those with diabetes.

“Individuals who are anxious are more likely to avoid treatment and use maladaptive strategies (like smoking or unhealthy diets) that enhance their blood glucose, which is problematic. It’s a snowball effect: The further they go, the worse it gets,” he adds.

“We also know that extremely high blood glucose can impact cognition as well. We talked about how, if we’re going to treat these individuals appropriately, it won’t be by sitting them down in a room and saying, ‘Hey, you need to eat better,’ or ‘You need to use your insulin on time.'”

“Research shows that people who practice mindfulness do better on the inhibition tests over time,” Murdock says, suggesting that shifting one’s attention away from stressful thoughts may affect physiological responses.

“I’m a firm believer that mindfulness-based approaches to treatment are a great idea, for a lot of reasons,” Fagundes adds. “That doesn’t mean medicines that promote inhibition, such as stimulants, shouldn’t be considered, but a combination of the two could be really helpful.” by Mike Williams, Rice University
A set of snap-together glasses will help doctors demonstrate the effects of diabetic retinopathy,… by Mike Williams, Rice University
A new device can produce enough food to make one salad per week for an entire year—and do it inside… by Mike Williams, Rice University
People who feel lonely are likely to think their cold symptoms are more severe than those who have… by Mike Williams, Rice University
What you say when a doctor asks how you feel is as good—or perhaps even better—than any test to…