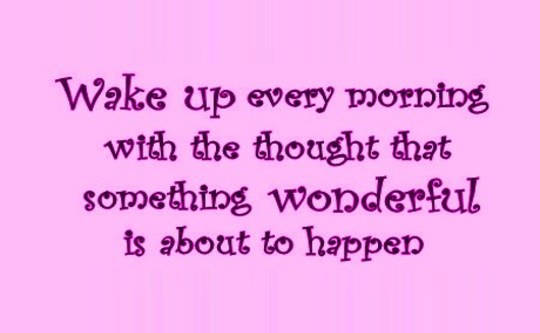 I have a confession to make. I saw the movie, Dumb and Dumber. Even more astounding, I liked it. Even beyond belief: I found at least two metaphysical lessons (which proves that God must be everywhere). There is a scene in which Jim Carrey declares his love to the woman of his dreams. On the heels of his revelation he asks her, "What are my chances with you -- one in ten?" She thinks for a moment and answers, "More like one in a million."

Garrey becomes very serious and begins to breathe deeply. The woman steps back in fear that he may hurt her. Instead, a huge grin spreads over his face as he gleefully spouts, "Wow! I have a chance!" Sometimes, dumb is smarter.

And sometimes it is not. In a later scene, Carrey and his sidekick, Jeff Daniels (It's hard to tell who is actually dumber) are stranded along the side of a desert road, when a busload of bikini-clad beauties pulls over.

Three awesome babes descend and ask the duo where they can find two guys to travel with the bus for a few months and spread oil on the ladies before their suntan lotion demonstrations. Dumb (or was it dumber?) tells the ladies, "There's a town three miles down the road that way."

The babes, disappointed that these guys didn't take the hint, chug off, leaving our anti-heroes in a cloud of dust. Carrey turns to his buddy and says, "You know, Harry, some guys have all the luck. I hope and pray that one day the same good fortune might come to us."

Set No Limits: Don't Let Your Limits Limit You

Sometimes the opportunity we have been waiting for is trying to crawl into our lap. If, however, we have a preconceived notion about how it should be, or if our attention is elsewhere, or if we are in fear, we may not recognize it. Sometimes our good is rushing to us from all angles, and we do not know it. Our purpose is not to go out and hustle up our good, but to accept the blessings being showered upon us now.

Arthur Boem was an Australian developer who dreamed of constructing a great pipeline to carry water from a mountain reservoir to the dry Perth desert. For years, Arthur planned the project, negotiated funding, and engaged in a long and arduous construction project. Finally the day came when the valves were to be opened to the current flow that would change the life of Perth forever. Boem and his associates stood at the end of the pipeline to enjoy the momentous beginning of the stream. But there was no water. The pipeline was a failure, Boem reasoned. Embarrassed and frustrated, Boem went into despair and the next day someone found him dead at his own hand. His sense of failure was so great that he could not go on living.

But that is not the end of the story. The next day someone noticed a few drops of water at the mouth of the pipeline. And the next day, more. Within a short time the water was gushing in great abundance. The pipeline, you see, was actually a success; it just took longer for the water to come through the channel than Boem expected. Sadly, he was not there to see his achievement flourish.

Often we may pray or work toward a dream without apparent results. The key word here is apparent. Sometimes it takes a while for our dreams to be delivered, often with good reason. We must trust that Spirit has a timing that supersedes our own idea of how and when things should happen.

When I was writing The Healing of the Planet Earth, I set a deadline for when the book was to be finished. (The word deadline is aptly chosen; often it is the noose that strangles our spirit.) As the time approached, I worked more and more feverishly with diminishing returns. The quality of the material was weakened and I became ill. On the day I had chosen for the book's completion, I was in bed with the flu; I had run my batteries down, and the universe forced me to stop trying to buck the tide of life.

Fortunately, I got the message and surrendered.. I gave up my idea of how and when it should happen, and allowed God to take over the project. I continued to work on the book at a more relaxed pace, and soon the quality of material returned to a high and rewarding standard. Eventually the book came out, and I understood why it had to wait.

During the time I continued to write it, I grew so much that my next stage of consciousness was imbued in the pages. If I had forced the book to come out in my time schedule, there would have been no improvement over my last rendering; it would have just been the same material in a different form -- and what is the use of doing the same thing again? I would rather do nothing until I could do it better.

Because we are created in the image and likeness of God, we cannot be dumb; but because we have free will, we can be numb. Kabir said, "I laugh when I hear that the fish in the water is thirsty." At this moment we are literally swimming in a sea of blessings; let us not miss them. Let us say yes to love.

Why Your Life Sucks: And What You Can Do About It
by Alan Cohen.

When your life sucks, it’s a wake-up call. Now self-help guru and bestselling author Alan Cohen invites you to answer that call, change your course, and enjoy the life you were meant to live. In ten compelling chapters, Cohen shows you how to stop wasting your energy on people and things that deaden you–and use it for things you love.