Life Is A Game, And We're All On The Same Team 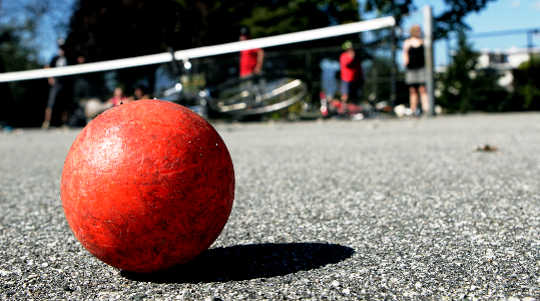 I've never been a big sports fan or a big fan of having to compete with others. I'm more of a "love your neighbor" and let's work together kinda girl.

I know competition can provide motivation to try to be better in a particular field or skill. But I think we've taken this win at all costs attitude way too far. Competing against yourself in order to improve yourself is fine, but feeling like you've always got to compete against everyone else is tiresome at the least.

The Problem with Team Spirit

In so many things in life, we tend to pick a favorite, to pick a side, and then stick to it no matter what happens. Some examples:

"I hate spinach, never mind that I've never have tasted it."

"My sports team is the best and is always right, no matter what."

"My Apple computer is the best, and I'll never use Microsoft..." or vice versa.

"Vegetarianism is the best, and everyone else is wrong."

"My religion is the only way to God and everyone else is going to hell."

Being faithful to our beliefs and supportive of the people we love is fine, however, we must also keep our eyes open and be aware of the problems that may be occurring with our "favorite" team or persons or beliefs.

Think, for example, of the battered wife who defends her husband no matter what. He may be beating her up every other day, yet she might still choose to stand up for him, right or wrong. Or, a coach may be a bully or a pedophile, or the minister a liar and a swindler, yet they are given a pass just because they are on "our team". "My team can do no wrong" is often the attitude that is taken.

The Other Side of the Coin

While we may want to defend our team, or our side of an argument, it is important to see both sides realistically. Sometimes the other side is simply right and we are wrong. We need to take each moment or action on its own, and judge each one on its own merits.

We should always be willing to admit what's wrong and look for how to fix it and make things better. When there is a rotten apple in the barrel, you have to acknowledge it and throw it out before it ruins the whole barrel of apples.

Joining the Dark Side?

It seems that so much of life has become an "us versus them" scenario. We see it in sports, of course, but we also see it in business, in religion, and these days especially, in politics.

In our current political discourse, this "opposition" has been taken to extremes. It seems like we won't even consider what "the other side" is saying. Nope! It doesn't matter what they're saying or what they want... they're wrong, and we're right!

Well, the only result we get out of that attitude is walls... not the Mexican wall, but the wall between individuals, co-workers, neighbors, family members, friends, communities, etc.

Be A Lover Not A Fighter

It is important to keep our eyes, our ears, and mostly our mind and heart open so that we can recognize and acknowledge when we find common ground between the two "opposing" sides. Rather than draw a line in the sand, we need to take everything moment by moment, action by action, thought by thought.

There's a lot of anti-Trump sentiment going around. Rather than having a 100% negative attitude, we need to take each action and each statement and evaluate it.

For example: in an interview with Bill O'Reilly on Fox News, Trump stated, when speaking about Putin and the accusations of his being a killer, that "we", meaning the US, weren't innocent of killings either. And he is right! The US, as well as many other countries, have committed atrocities in their past. Admitting it is a first step in making sure we don't continue down that road.

Trump also has spoken repeatedly, in his campaign, of the corruption in Washington. He was also right on that one! Whether what he's doing now is making it any better is another question, but one must look at the truths and the accuracies in what is said and done, and be willing to support those. Doing a blanket rejection of everything a person says or does is not giving the person a chance to change, and to do things differently.

Let's compare life to a game of chess. If you always expect your opponent to play exactly the same way, you may end up losing the game because you weren't open to the changes taking place.

We need to stop being for or against a person or a political team or religion, and rather be for or against individual actions, individual statements, individual principles. In this way, we can start to find common ground between all of us and discover ways to work together to create the greater good that we seek.

Here's a video which shows so eloquently that we have far more in common than we might usually see and/or acknowledge. Finding Your Way and Flowing with The Mystery of Life (Video) by Marie T. Russell, InnerSelf.com
There is a common theme in a lot of the things I hear, see, and read these days. It is the theme of…

by Barbara Berger
In every interaction with other people, we are always making choices consciously or unconsciously…

by Sarah Varcas
The energy of this lunar eclipse is flexible and changeable. It cannot be pinned down and how we…

You Have Problems? And... What Is Your Vision?