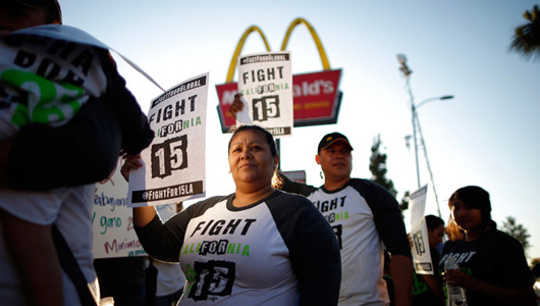 Low-wage workers nationwide have been campaigning for a $15 hourly "living wage" and the right to organize without employer labor law-breaking. But a new think tank report says that in most states, $15 is not enough - even for one person.

As a matter of fact, adds the report, Pay Up: Long Hours And Low Pay Leaves Workers At A Loss, the national average hourly living wage for a single person should be $16.87, at least as of the end of last year. In D.C., Hawaii and Maryland, it should be over $20.

For families, the situation is even worse. In Massachusetts, for example, a single mother with two kids would need to earn $43.30 an hour to achieve a living wage.

The Alliance for a Just Society has issued such wage reports since 1999, but this is its first to discuss living wages. The issue is important: A living wage - or lack of it - is a key factor in income inequality, the yawning gap between the rich and the rest of us, nationwide.

"Workers are struggling, and it is past time for change. Increasing the federal minimum wage to a living wage and abolishing the tipped subminimum wage will be a strong step in the right direction, while unionization and enforcement of equal opportunity statutes will ensure that all workers have access to benefits and protections in the workplace," the report says.

- Besides Arkansas, the only states where the living wage for a single adult would be under $15 an hour are Idaho, Iowa, Kansas, Kentucky, Mississippi, Missouri, Montana, Nebraska, both Dakotas, Ohio, Oklahoma, Tennessee, West Virginia and Wyoming. Though the report did not say so, Kentucky, Missouri, Montana, West Virginia, and Ohio are not so- called "right-to-work" states.

"A worker supporting only herself would have to put in 93 hours a week at the federal minimum wage to make ends meet, and a tipped worker could have to work more hours than there are in a week to support herself if tips aren't enough to make up the difference," it says.

- Tipped and fast food workers not only earn a lot less, but they're more likely to suffer wage theft, putting them even farther from a living wage than they already are. "In compliance sweep by the U.S. Department of Labor from 2010-2012, 83.8 percent of investigated restaurants had some type of violation. Similarly, a 2008 survey found that 30 percent of workers in the sample were not even paid the tipped worker minimum wage, and 12 percent reported that employers or supervisors stole their tips," the report notes.

In Illinois, for example, the living wage for a single adult would be $16.93 hourly, double the state's minimum ($8.25) and above the proposed minimum in Chicago. The single working Illinois adult would need to gross $2,934 monthly, at the $16.93 rate, to earn a living wage.

The adult Illinois worker would spend $752 on housing and utilities, $625 on transportation, just under $500 on federal, state and local taxes, $438 on clothing and household goods and $209 on food. The report assumes the worker could sock $243 away in savings.

"The reality is that we live less than a paycheck-to-paycheck life," Stacy Ellis, a 42-year-old single mother of several kids and a veteran fast-food worker in Albany, N.Y., told the report's authors. "I make $8.75 an hour and we are barely surviving," even though she loves interacting with her customers at McDonald's.

"My wages only pay for our living expenses - not shampoo, or a pair of shoes or a school field trip - and there is no way to get ahead...My kids are forced to go without normal things kids need. My youngest has never had new clothes, just for her. She gets hand-me- downs from her older siblings, and a lot of the time they are from my 10-year-old son.

"It isn't right. I work hard, and I want to be able to provide for my own family without assistance - so when I work hard, I can see the benefit of that work. Everyone who works deserves a living wage, and the opportunity to do better for themselves and their family."

Ellis said she is re-enrolled in college to finish a degree and become a social worker to help at-risk youth. "If I made $15 an hour, I could take care of my family's needs, finish school, and build a stronger future that doesn't require public assistance," she points out. The Morality of Canceling Student Debt by Ivy Brashear
How marginalized groups are working to counteract historical wealth inequality. by Aude Cefaliello, University of Glasgow
I belong to a generation that has been told there is no other choice other than to be flexible in… How Unaccompanied Immigrant Youth Become Exploited Workers In The US

by Stephanie L. Canizales, University of Southern California
The Trump administration has released a series of executive orders targeting immigration at the… by Jennifer Wilson, Macquarie University
A common stereotype of fraudsters is that they are psychopaths. That fraudsters are considered…