Why Are Black Youths So Often Branded As Criminals 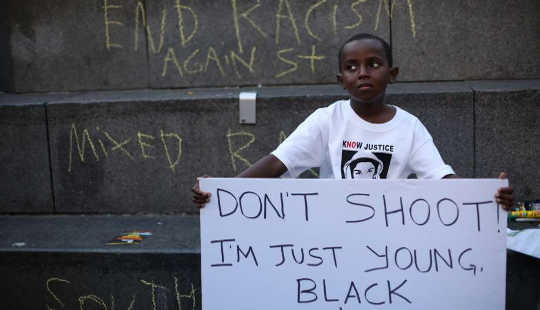 Two years ago, on Aug. 9, 2014, Michael Brown, an unarmed 18-year-old African-American teenager, was shot and killed by a white police officer in Ferguson, Missouri. Two years have passed since the recent high school graduate was denied the opportunity to begin his next stage of life: college.

Brown was often described as a “gentle giant.” His leisure activities were hardly different from most in his age group – hanging out with friends, listening to music and playing video games. The night before he was shot, he posted to Facebook, “Everything happen for a reason.” Certainly, Michael Brown did not foresee what was going to happen the next day. But for too many black and brown youths, run-ins with law enforcement are too familiar and, coincidentally, predictable.

As a scholar of African-American history specializing in youth, race and crime, I find today’s issues of youth criminality inextricably linked to their racial past.

In those two years since Michael Brown, we have been regularly reminded that youth is a privilege granted to some and denied to others.

According to a new poll conducted by the Black Youth Project at the University of Chicago, two-thirds of young African-Americans, and four in 10 Hispanics, admit to having personally experienced or knowing someone who experienced harassment or violence at the hands of the police.

In the two years since Michael Brown was killed, according to Washington Post data on police shootings, the police have shot and killed 27 persons under 18 – a majority of whom were black or brown. For young adults between the ages of 18 and 29 – a bracket in which it becomes more difficult to discern age by appearance – the numbers increase exponentially to 296.

To be sure, police encounters make up only a part of the fundamental issues youths of color face in today’s justice system. The criminalization of black youths, or the process in which various social institutions criminalize black youth, is expansive and denies many the right to be young.

This not only denies black youths the right to a fair justice system but also, as was the case in Michael Brown, often denies them the right to face a judge and jury.

Months before Ferguson, a group of psychologists conducted a study that determined “black boys can be seen as responsible for their actions at an age when white boys still benefit from the assumption that children are essentially innocent.” Indeed, for children of color, their denial of youth is inextricably linked to their denial of innocence — a denial that has deep societal and historical roots.

The split-second decisions police officers make about the young men they confront are caught up in tacit ideas about adolescence that go back centuries. As modern ideas about race and criminality were taking shape, especially in the late 19th century, a movement to keep youth separate and protected emerged.

How The US Immigration Court System Is Broken?

Historians of the “child-saving” movement identify this period as crucial to understanding contemporary institutions of juvenile control. “Heavily influenced by middle-class women who extended their housewifely roles into public service,” writes historian Tony Platt, these reformers devised a separate criminal justice system to protect youth under the age of 18 from adult culpability. The Progressive era reformers who led this “child-saving movement,” from the 1890s through the 1920s, believed that with the proper intervention, young people could be disciplined without the scarring force of a prison sentence. Or, perhaps more importantly, without the stigma of being labeled a criminal.

Reformers used the color-blind language of age, but it quickly became apparent that the system they developed emphatically benefited white youths. Black youths, on the other hand, were refused the right to adolescence, innocence and second chances. Separate but equal prevailed in theory; in practice, the juvenile “justice” system gave in to broader social notions about race and crime.

For white youths, especially white immigrant youths in the Progressive era, the separate juvenile system represented a step toward Americanization. Many reformers, such as Jane Addams, hoped a separate system to rehabilitate youths who turned to crime would curb societal concerns posed by the influx of European immigrants.

Black youths – whether guilty or innocent – were branded “criminal” and almost guaranteed a life tethered to the justice system. In Chicago, for example, in 1903 there were 56 cases of black delinquency presented before a judge; in 1930, there were 657 cases. This kind of overrepresentation became the juvenile court’s most troubling problem by the 1930s.

States’ authority to separate youths from adults was reaffirmed by the federal government with the passing of the Federal Juvenile Delinquency Act of 1938. The law laid out when a transfer from the juvenile system into the adult system was in the interest of justice and took its direction from juvenile designations created at the turn of the century.

These labels included, but were not limited to, “the age and social background of the juvenile,” “the availability of programs designed to treat the juvenile’s behavioral problems” and “the juvenile’s present intellectual development and psychological maturity.” The open-endedness of these characterizations combined with the complete judicial authority allowed mostly white judges to shield many white youths from adult culpability. Black youths, on the other hand, were hastily demarcated as adults and bore the brunt of the punitive shift to the “Jim Crow juvenile justice system.”

The right to remember

The criminalization of black youth is inseparable from its racialized origins.

Certainly, a separate justice system must be in place to protect all youths from adult accountability for misdeeds that can be attributed to adolescence. But as it stands, the juvenile justice system mirrors societal prejudices toward black youths and, too often, regards them as mature beyond their years and guilty until proven otherwise.

North Carolina and New York, for example, have no legal authority to treat 16- and 17-year-olds as juveniles. These youths are housed in local jails with adult populations while awaiting trial and, if convicted, do their time in the adult criminal justice system. Young men of color, according to New York City’s “Raise the Age” campaign, make up roughly 82 percent of youth sentences committed to adult confinement — nearly all of whom are accused or convicted of nonviolent offenses.

I believe President Barack Obama’s order to ban solitary confinement of juveniles in federal prisons was a step in the right direction. Be that as it may, it will take the efforts of both the federal and state governments to make amends.

Two years since the “white rage” in Ferguson was made visible after the kindling of the flame had been ignored for so long. Two years since a youth whose unsurpassed potential was denied to the world by a trained professional whose number one responsibility is to protect the general public. And as calls for police reform and training continue to emerge as the first-line response from politicians, I suspect the problem will remain.

It runs too deep. History cannot be unlearned with training. But history can be revisited. And it can help you remember. I remember Michael Brown; I remember a youth deferred. The Truth about Mercury Retrograde: It's Actually A Good Thing!

by Sarah Varcas
There’s always much talk (and a fair amount of hype!) when Mercury turns retrograde, most of it…

by Joyce Vissell
December 21, 1968 was our wedding day. It was the happiest day for me. After four years of loving…