Indonesia Can Fight Against Climate Change With These 2 Solutions 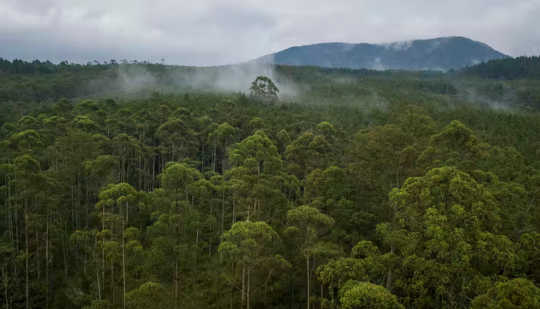 Indonesia can become a significant global player in tackling the climate crisis if it optimises the work of protecting and rehabilitating forests. This is because the country is home to Asia’s largest tropical forest.

Protection and rehabilitation strategies in forestry and land use are known as nature-based solutions to climate change. These practices are proven to be effective. In Indonesia, these strategies could reduce 60% of the entire nation’s carbon emissions.

However, the Indonesian government still spends most its climate budget on the energy and transportation sector, accounting for US$236.2 billion or 95.51% of the total. It allocates less than 3% to the forestry and land use sector.

As an ecology researcher, I suggest the government allocate a bigger budget to two nature-based solutions that could effectively mitigate climate impacts.

Being the second-largest contributor to the Indonesian economy, agriculture remains the most pressing factor in tropical deforestation in the country.

From 2000 to 2009, agriculture was responsible for 66% of the country’s deforestation. This indicated Indonesia’s sustainable agriculture policy was not well implemented.

The agriculture sector should be focused on meeting the nation’s demand with strict sustainable policy. Excessive agricultural expansion must stop.

To do that, we could learn from the Netherlands – the world’s pioneer in sustainable farming. They optimised hydroponic systems to produce more products while using less water and land. This farming system does not require conventional components such as synthetic chemical fertilisers and extensive irrigation.

The government also needs to focus on enhancing farmers’ digital literacy and to invest in supporting infrastructure.

Digital agriculture could become a solution to improve the sustainability of agriculture.

Reforestation often works naturally – as long as human perturbations, such as fires and land use, are minimal.

However, forest restoration is facing many challenges.

Indonesia still has significant illegal deforestation in natural forest. The country is the most significant global producer of illegal timber. This makes the restoration effort much slower than the rate of forest loss.

The government should reformulate its strategies so forest restoration and protection can be done effectively and efficiently.

First, degraded land and disconnected forest should be made priority areas for restoration to improve habitat connectivity. A vital factor is accurate ecosystem data.

Second, the government could optimise community-based rehabilitation by offering incentives to targeted communities.

For example, in South Tapanuli, North Sumatra, the local community will get an incentive for restoring forest. They also can harvest sustainable forest products as a source of income.

A 2017 study by ecological researchers from The University of Queensland has shown that Hutan Desa (village forest) management has successfully avoided overall deforestation. Village forest is defined as community management of forest given by the government to protect the forest as well as improve village welfare.

To protect the larger ecosystem, the government should strengthen the protection of key biodiversity areas.

Indonesia is recognised as one of 17 countries with “mega biodiversity”. It has 493 Key Biodiversity Areas (KBAs) covering 344,003km². But only about 5.3% of them (26 KBAs) are designated as Protected Areas (from human perturbations).

Start to work with nature, now

There is no silver bullet that could solve the climate crisis at once.

By following the mitigation and conservation hierarchy – a step-by-step framework set by a global team of scientists to guide implementation of specific actions – reversing climate trends is possible.

For example, to stop environmental damage caused by palm oil plantations, the government’s first step should be to end new permits in old-growth forest.

This policy should be followed by adhering to best practice in growing and harvesting palm oil, such as limiting heavy machinery in the extraction process, to prevent further damage.

The next step is to remediate biodiversity loss by replanting cleared areas of the forest within palm oil sites. This can happen on plantation roads.

And the final step is to offset the forest loss by replanting degraded areas near the site.

Collaboration between the government, local communities and corporations is vital to ensure sustainability.

We need to work fast, since time is running out. Why Heat Pumps And Solar Panels Essential To National Defense

by Daniel Cohan, Rice University
Solar panels, heat pumps and hydrogen are all building blocks of a clean energy economy. But are… The Power Plant of the Near Future Is Hybrids

by Joachim Seel, et al (Berkeley National Laboratory)
While the first decade of the 2000s saw huge growth in natural gas generation, and the 2010s were… Even With Drastic Emissions Cuts, Large-scale Co₂ Removal From Air Will Be Necessary

by Sam Wenger and Deanna D'Alessandro, University of Sydney
The report finds that in addition to rapid and deep reductions in greenhouse emissions, CO₂ removal… Does China Meet or Miss Its Climate Change Targets?

by Phillip Stalley, DePaul University
China has more solar power capacity than any other country and makes many of the world’s solar…