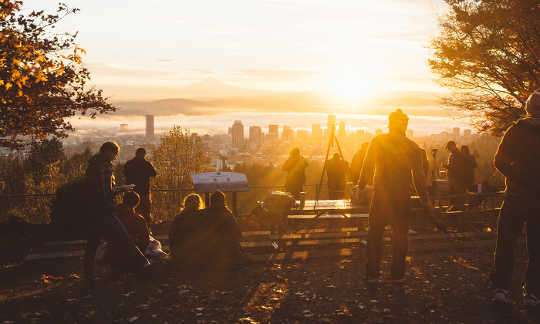 From action-oriented toolkits to talk therapy and meditation, these responses facilitate recovery, hope, and activism.

This summer, wildfires erupted in California, torrential rains flooded parts of Japan, and record-breaking temperatures led to a number of heat-related deaths around the globe. Disasters like these are augmented by climate change, and scientists say extreme weather like this will increase and worsen as climate change accelerates.

And it’s impacting our mental health.

Given the scale of climate change, it makes sense that people are worried about its impacts. And worry can lead to depression, anxiety, and persistent fear. While worry can be a motivator for action, it can also have the opposite effect, leaving us feeling powerless, overwhelmed, and apathetic.

As research scientists who study the interaction between ecology and human health, we’re interested in the ways that climate change impacts our mental health. People can experience everything from altruism, a sense of personal growth, and strong sense of community to post-traumatic stress disorder, panic, and anxiety after a climate-related extreme weather event. While less is known about the positive mental health effects from climate change, the impacts of climate-related extreme weather on mental illness is better established. For example, one year after Hurricane Katrina struck New Orleans, researchers found an increased prevalence of PTSD, mental illness, and suicidal thoughts and plans. Research also suggests that climate change affects pre-existing mental health conditions. One study found that climate change exacerbated obsessive-compulsive disorder, with participants expressing obsessive-compulsive tendencies over wasting water, gas, and electricity; and obsessive fears about flooding and drought.

So what is being done to address the mental health consequences of climate change? Recent scholarship—by us and others—shows that in many places, community-based responses are facilitating recovery, hope, and action.

REACH NOLA is a New Orleans nonprofit collaborative of community-based faith groups, academics, health practitioners, and social service providers to address the mental health recovery of those impacted by Hurricane Katrina. In 2006, REACH NOLA established the Mental Health Infrastructure and Training Project to respond to the mental health effects of the hurricane. MHIT is a mental health care capacity-building project that provides guidance on mental health care training and implementation in at-risk communities.

Here’s how they did it: Before health practitioners entered the community, HCNA community leads provided residents with information and education about depression and the potential for other mental health effects related to disastrous events like the hurricane. The aim was to dispel pervasive stigmas about mental health that would keep people from accessing help. Mental health practitioners then provided treatment to residents. They also trained lower 9th ward residents to offer mental health aid, who were then employed as community health workers in their neighborhood. This opportunity provided mental health services, employment, new career opportunities, and opportunities for residents to be stewards in their neighborhood’s recovery.

Bridging community institutions with mental health care providers is a common approach to providing care after a climate-related disaster. The community of High River, Alberta, was left with mental health concerns long after government money and disaster response assistance dried up. In 2013, the town experienced a super flood that displaced the entire town of 13,000 people and resulted in four deaths. According to public health surveillance research, as well as stories from residents, many townspeople reported anxiety, trouble sleeping, and post-traumatic stress disorder following the flood.

In response, the town is currently implementing a mental health initiative called Safe Spot, which trains employees of business and agencies in psychological first aid to support community well-being. An orange dot in the windows of businesses lets community members know that they have a safe space to talk about, and seek support for, their mental health from trained community members. If someone is experiencing a crisis and they need support before they are able to access formal counseling or professional services, they can seek support from a local business or agency who has been trained in psychological community care. The idea is that every door is the right door to support community mental health and well-being.

3. The Transition Town Movement provides a space for connection and environmental activism

Transition Town initiatives throughout the United States, Canada, and around the world are part of a community-driven grassroots movement to help people cope with climate change, peak oil, and ecological degradation. At the heart of the movement is inner transition work, which is based on the idea that the relationship that we have with the natural world is a direct reflection of the relationship we have with our inner landscape.

Individual community members are supported through their inner transitions by community groups. These groups provide a space for residents to talk about fears and concerns about climate change, support each other in building community resilience, and provide opportunities to explore plans to transition to a low-carbon future. According to a study on the adoption of the transition model in 10 towns in Australia, researchers found it helped individuals develop lifestyle changes to reduce carbon emissions. They also found that developing an eco-spiritual connection helped individuals—especially women—incite action on climate change.

In the U.S., Transition U.S. is building a nationwide campaign to support community resilience and emergency preparedness. Called Ready Together, the campaign aims to prepare communities for environmental disasters—like climate-augmented extreme weather—through educational materials and action-oriented toolkits. The initiative is currently being launched with plans to include podcasts, webinars, workshops, and a Ready Together handbook to prepare communities for disasters. The campaign targets physical preparedness as well as mental health needs after a disaster.

4. Transformative processes to reconnect people with themselves and their environment

In some cases, communities are supporting individuals’ spiritual growth to help them cope with climate change. The Work That Reconnects is a group process for cultivating spiritual growth first developed by Joanna Macy in the U.S. and now facilitated by trained educators around the globe. It’s rooted in the belief that addressing climate change and other ecological crises starts with cultivating appreciation and gratitude for the Earth. At the same time, the facilitated groups provide safe places where people can share feelings of fear, doubt, guilt, and even despair. Recognizing that we experience pain about climate change because we are connected to all life and future generations—and understanding that we are not alone in experiencing this—can empower action.

The process employs a wide variety of meditative and interactive practices, many involving the use of the imagination to stimulate creativity and cultivate empathy. In a Work That Reconnects workshop led by Mark Hathaway for undergraduate environmental studies students at the University of Toronto, one student wrote in their reflection that the approach “highlights the interconnectedness of the participants with one another, as well as with the greater world, which once again leads to an emotional connection.” Another student wrote that the process built a sense of empowerment and helped them experience “the capacity to instigate change.”

5. One Earth Sanga: the online community that supports spiritual growth and ecological awareness

Some community-based mental health programs also help people reckon with the inequality that’s exacerbated by climate change. One Earth Sanga is an online platform that helps people respond to the climate crisis through Buddhist teachings and its EcoSattva training program. This platform was co-founded by two Buddhist environmentalists, Kristin Barker and Lou Lenard, and was created in partnership with the Insight Meditation Community in Washington state. The online platform provides a digital space to learn, reflect, and take action on climate change.

One of the teachings on this platform—and highlighted in its training program—is about confronting Whiteness and addressing privilege as a necessary part of confronting climate change. The equity training that One Earth Sanga provides can be an important reckoning for many who sympathize with people on the front lines of climate change but may not recognize the role privilege and Whiteness plays in shielding them from many of the social, emotional, physical, and mental health consequences of climate change.

Katie Hayes is a Ph.D. candidate at the University of Toronto. Her research investigates the mental health consequences of climate change, with a focus on the inequitable risks and impacts to marginalized groups. It also looks at how psychosocial resilience is supported within a changing climate.

Blake Poland is a professor in the Dalla Lana School of Public Health and director of the Collaborative Specialization in Community Development at the University of Toronto. His research and teaching focus on community resilience, social movements, and sustainability transitions. by Vikki Thompson and Alan Thomas Kennedy-Asser, University of Bristol
An extreme heatwave in India and Pakistan has left more than a billion people in one of the most… Why The Concept Of Net Zero Emissions Is A Dangerous Trap

by James Dyke, University of Exeter et al
Sometimes realisation comes in a blinding flash. Blurred outlines snap into shape and suddenly it… by Brian McNoldy, University of Miami
A “super full moon” is coming, and coastal cities like Miami know that means one thing: a… by Elizabeth Mossop
As the climate changes, floods and extreme rainfall events will become more intense. In many cases,…