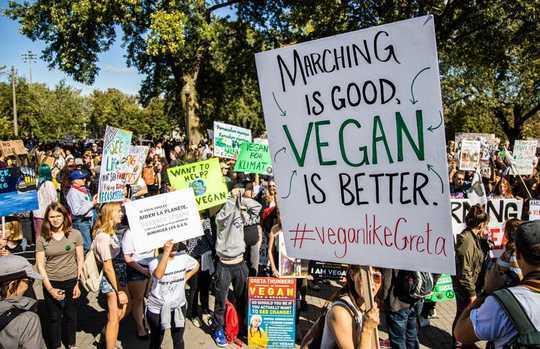 Can your individual behaviour make a real difference to the environment? And should you be expected to voluntarily change your life in the face of our worsening environmental crises? Some argue this emphasis on personal responsibility is a distraction from the real culprits: companies and governments.

We often treat the decisions to find alternative ways of living more sustainably and to pursue political resistance against big polluters and inactive governments as separate. But our recent research found that the relationship between alternatives and resistance is really far more complex. One can often lead to the other.

Previous studies have shown that taking individual responsibility for the environment or developing green alternatives often go hand in hand with political action. Our research suggests that this relationship can form over time, and that when people change their lifestyles for environmental reasons this can galvanise their political action more generally. But we also found that this doesn’t always happen and that bringing the two together can be difficult.

Our first study, carried out with Soetkin Verhaegen of UCLouvain in Belgium, looked at the environmental actions of a group of over 1,500 politically interested Belgians between 2017 and 2018. We found that citizens who took individual actions such as buying ethical products, changing how they travelled or producing their own food or energy, became more politically active over time. This included interacting with political institutions (for example, contacting elected politicians) and other actions such as taking part in protests.

Our research suggests that taking individual responsibility for the environment increases your concern for it, which in turn motivates you to participate in other forms of action. While the effect was quite small, this seems to be good news for environmental movements. It shows that when people (at least the politically interested ones) can be motivated to adopt modest lifestyle changes, they can, in turn, become politically active in more a general sense.

Yet on a practical level, trying to encourage both individual alternatives and political resistance isn’t easy, as we found in our study of two organisations promoting local food and energy systems in Manchester in the UK. As well as having limited time, the organisations found political activism sometimes conflicted with their aim of promoting alternative lifestyle projects to the broadest possible audience. As one interviewee put it: “If we’re trying to influence the uptake of solutions, then being seen as the opposition … isn’t particularly productive.” 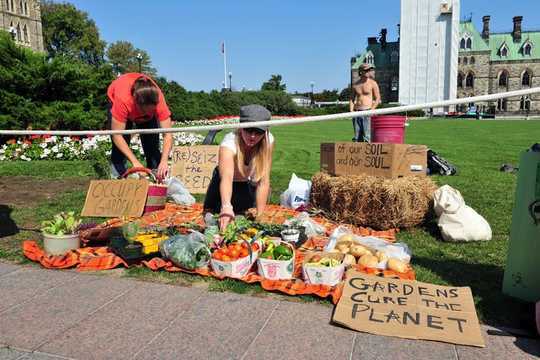 However, we’ve also seen how bringing alternatives and resistance together can be done, and that its success can depend on location. In a series of in-depth interviews with environmental organisers in Bristol, we found the activists strongly benefited from their city’s compact size and layout (when compared to Manchester). Being more likely to bump into people from other activist groups means that, according to one interviewee, “your socialising is political”.

The result was that activists in Bristol were better at maintaining relationships between different groups and at keeping the social side of activism going than in Manchester. This enabled a crossover of participants between the alternatives and resistance sides of the movement.

Some started growing their own food and ended up defending their allotments against urban developments. Others who were initially protesting against supermarkets ended up in a food-growing scheme.

Pursuing alternatives also helped sustain the resistance activities. This was both because the alternatives often involved a more positive experience and because they made it easier to point to viable solutions during environmental protests.

So from a campaigner’s point of view, there’s little evidence that promoting alternative lifestyle choices and political resistance are mutually exclusive. In fact, in many cases the two feed into each other in positive ways, especially in the form of spillover from participation in one form of action to another.

The effect we found was quite small and spillover will certainly not happen automatically. But that suggests there’s an important role for organisers to stimulate it further. Different organisations are needed to provide both personal and political activities and encourage more (and more diverse) people to get involved.

For most ordinary people concerned, the debate over the effectiveness of taking individual responsibility for the environment is likely to continue. Our research at least suggests that people motivating each other to take personal action doesn’t undermine a broader environmental project. But it’s still important for people to discuss what other action is needed, and to look for or even organise ways to put pressure on powerful actors to take their responsibility.