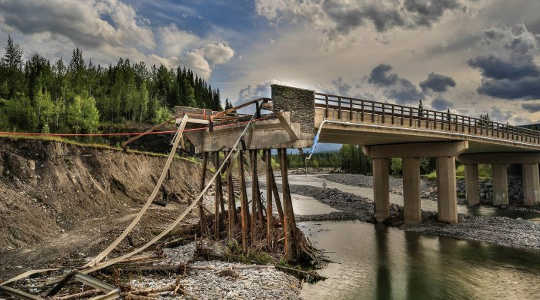 A bridge washed away by devastating floods in Alberta, Canada, in 2013. Image: Gregg Jaden via Flickr

Leading scientists say most people remain unaware of the truth that climate change is a stark reality now and will continue to get worse without drastic action.

A rise in world temperatures of 1.5°C degrees can no longer be avoided, according to the world’s leading climate scientists, who say that the majority of people have yet to wake up to the stark realities and dangers of climate change.

In a devastating summary of the crisis the world faces, the seven scientists say that propaganda by the fossil fuel lobby and failure of politicians to take action in the last 10 years means changes in lifestyles and radical action is needed if catastrophe is to be avoided.

A doubling or tripling of existing efforts is necessary, he says, to avoid exceeding the 2°C degree danger threshold on global temperature rise agreed by the world’s government at last year’s Paris climate conference.

In a paper titled The Truth About Climate Change, the scientists depart from the normal cautious assessment that has characterised IPCC reports.

Instead, they paint a stark picture of rising temperatures causing floods and wildfires, food and water shortages, damage to human health, and widespread disruption of services and destruction of roads, railways bridges and buildings.

Sir Robert, now director of strategic development at the Tyndall Centre for Climate Change Research at the University of East Anglia, UK, was joined in producing the report by Italy’s Dr Carlo Carraro, vice-chairman of the IPCC working group III, and by other expert climate scientists from Argentina, Austria, Brazil, and the US.

The scientists say that the public has misunderstood the imminent dangers of climate change, believing that it will happen sometime in the future rather than now.

Large numbers of people have been misled into believing that economic growth can only be achieved by burning coal, gas and oil. And despite overwhelming scientific evidence, pressure from sectors benefiting from the use of fossil fuels has halted climate action.

“Climate change is happening now and much faster than anticipated”

The calculation that the rise to 1.5°C can no longer be avoided is based on the scientific evidence of the time lag between carbon dioxide being emitted by man into the atmosphere and the resultant heating up. The full effects of the greenhouse gases emitted in 2016 will only be felt in 2030.

The paper says that, by 2015, the global temperature had risen by 1°C above pre-industrial levels, that it is certain to rise another half a degree by 2030. and will continue to rise to 2°C by 2050 unless drastic action is taken to reduce emissions.

However, this is only the average temperature. Parts of Asia and the Middle East will warm considerably faster than this, and the Arctic has already seen a 4°C increase.

All the calculations are backed up by published scientific papers and have been peer reviewed by Dr Thomas Stocker, professor of climate and environmental physics at Bern University in Switzerland, in an attempt to prevent the fossil fuel lobby attacking the findings.

With the majority of the world’s energy still coming from fossil fuels, and the expanding population demanding yet more energy generation, the scientists say saving the planet from dangerous overheating is now a daunting task.

To have any hope of solving the problem, the world needs to reach net zero emissions by 2060 to 2075. Although switching to renewables and planting more forests are important components of how to do this, it cannot be achieved by these methods alone.

Only by carbon capture from the atmosphere and storing it underground, or by some other method of removing carbon from the air, can zero emissions be achieved in time.

Despite the gloom, the scientists say there are two causes for optimism.

The first is that by 2018 all countries are committed to making improvements to their existing pledges to cut carbon, which still gives sufficient time to adopt the necessary policies to take effective action.

The second is the pledge by the IPCC to improve its communications so the public understands quite how serious the situation really is. – Climate News Network by Jessica Corbett
"These Twitter ads aren't just any political issue ads—they epitomize the art," according to a… by Tim Flannery
In this age of rapidly melting glaciers, terrifying megafires and ever more puissant hurricanes, of… by Kelly Sims Gallagher and Fang Zhang
As the effects of climate change become more widespread and alarming, U.N. Secretary-General…

by Alan Cohen
We have all given our power away to something -- many things -- and our lives have sucked for it.…

What We Do to Nature, We Do to Ourselves

by Charles Eisenstein
I am afraid my message is going to be controversial. You see, I think there are deep problems with…