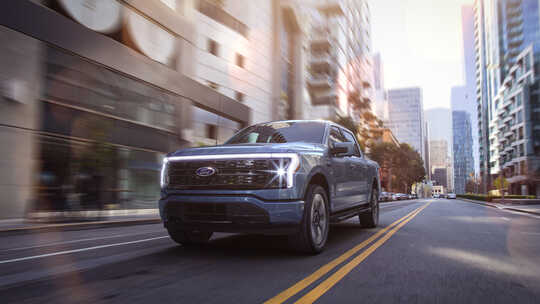 When President Joe Biden took Ford’s electric F-150 Lightning pickup for a test drive in Dearborn, Michigan, in May 2021, the event was more than a White House photo op. It marked a new phase in an accelerating shift from gas-powered cars and trucks to electric vehicles, or EVs.

In recent months, global auto manufacturers have released plans to electrify their vehicle fleets by 2030 or 2035, setting up a race to see who can most quickly shift entirely away from producing vehicles powered by gasoline.

Like Biden, former President Donald Trump promised to create jobs in the auto industry. But Trump sought to do it by perpetuating a fossil-fueled system that is the largest source of U.S. greenhouse gas emissions. Automakers benefited from some Trump policies in the short term, including the rollback of fuel economy standards. Now, however, they seem to be embracing the challenge of competing globally in a climate-constrained future.

As an environmental historian, I see this moment as pivotal because unlike EVs from manufacturers like Toyota or Tesla, the electric F-150 does not entirely rely on green consumer choice. It places the electric vehicle transition squarely in the hands of mass-market consumers who don’t choose cars based on environmental considerations, and who are buying far more light trucks – pickups, sport utility vehicles and minivans – than cars today. 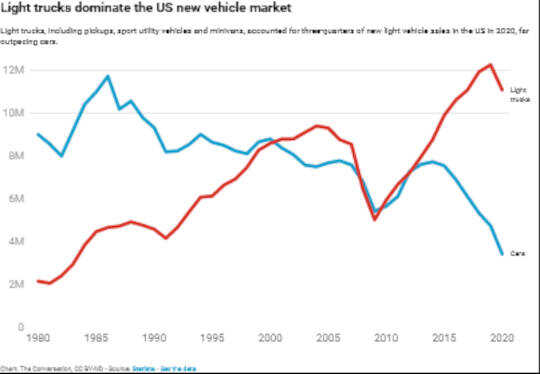 The century of gasoline

America’s 20th-century affair with gas-powered cars was not inevitable. From 1890 through about 1915, vehicles powered by horses, coal, electric batteries and gasoline jockeyed for position on U.S. streets. And electric-powered vehicles had some clear advantages. Many consumers feared that gas-powered cars were prone to explode, and there was no nationwide fueling infrastructure.

But World War I combined with a moment of technological convergence that favored the internal combustion engine. Massive new petroleum discoveries in Texas, and later in the Middle East, produced a glut of oil, just as electric lighting replaced kerosene lamps. 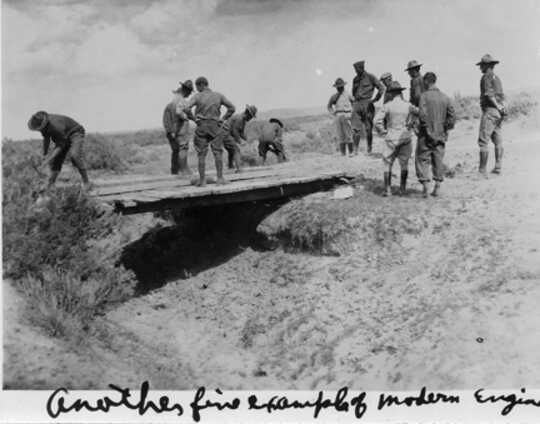 In a photo captioned ‘Another fine example of modern engineering,’ members of the 1919 Transcontinental Motor Convoy decide whether a rickety bridge will support their vehicles. Eisenhower Presidential Library

By World War II, gasoline-powered personal transportation and road-building to support it had become planks of American economic growth. In the 1950s, President Eisenhower furthered that commitment with the construction of the most extensive system of highways the world had ever seen.

What Works and Doesn't Work With Carbon Pricing

Why Wind Turbines Could Make Growing Conditions Better For Crops

Car culture and the pickup truck

Americans’ particular contribution to 20th-century transportation patterns was making automobiles part of a competitive consumer marketplace. Starting in the 1950s, a complex economy of easy financing and advertising drove consumers to buy new and buy often. Every aspect of a car was a potential marketing point, from chrome styling to hemi-powered hot rod engines and more modern options like remote starting and rear-seat theaters.

Another uniquely American marketing achievement was framing trucks – utilitarian vehicles designed for work – as rides that could also serve consumers. Advertisers used themes of grit and power to sell trucks, depicted in the muddy expanses of western landscapes, to suburban drivers. 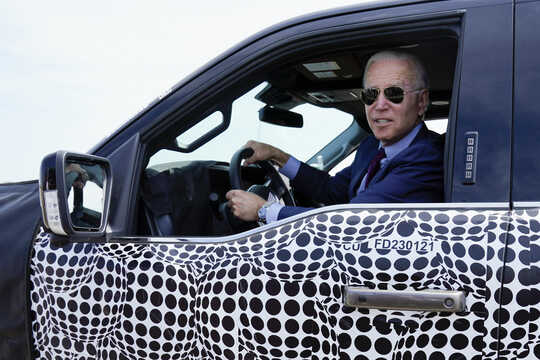 By the year 2000, pickup trucks were U.S. automakers’ most profitable models, and manufacturers were looking for ways to make these vehicles more powerful and luxurious. Ford’s F-150 became the best-selling vehicle in the nation in 1982 and held that spot for the next four decades.

Lightning in a bottle?

Modern hybrid and electric vehicles emerged in the 1990s, driven by Japanese manufacturers’ innovations. Early versions – the Honda Insight and Toyota Prius, and later the Nissan Leaf – allowed consumers to choose automobiles that burned much less gasoline, or none in the case of the Leaf. Options like these had been unavailable during the gas crises of the 1970s.

While the Prius, which was the first mass-produced hybrid electric vehicle, will likely be remembered as transformational in the electric transition, Tesla was the first manufacturer to take the possibility of an alternative vehicle and combine it with style and prestige. Tesla brought bling and sex appeal to early EVs, many of which had functioned more like their golf-cart cousins.

Car-buying guide Edmunds suggests thinking of the electric F-150 as “a battery you can drive.”

To satisfy their needs, the Lightning has a battery large enough to travel more than 200 miles per charge (320 kilometers), and paying a bit more gets customers over 300 miles (480 kilometers). An electric motor on each axle provides faster acceleration than gas-powered models and enough torque to tow 10,000 pounds (4,535 kilograms).

In a unique feature, the truck’s battery pack can be configured to produce 9.6 kilowatts of power – enough to run an average home for three days during an outage. The Lightning also has 11 outlets that enable it to double as a worksite power station for charging tools and gear.

The base model has a sticker price just under US$40,000, and the Lightning qualifies for a $7,500 federal tax break for electric vehicle purchases that the Trump administration tried unsuccessfully to end. Combined, those factors can make it cheaper to buy than its gas-powered sibling.

Ford’s 1908 Model T may look like ancient history by comparison, but experts chose it as the car of the 20th century because it put gas-powered cars within reach for mass consumers. Judging from early consumer buzz, the electric F-150 could play a similar role for EVs today. Ford received 100,000 preorders in three weeks for the new model, which is scheduled to start rolling off the assembly line in spring 2022.

As one analyst put it, “If this truck is successful, it means you can sell an electric version of any vehicle. It could be the domino that tumbles over the rest of the market for EVs.” by Alan Cohen
The business and relationship situations in your life do not have a life or reality of their own.…

Talking About a Subject Hardly Anyone Wants to Talk About: Death

by Jane Duncan Rogers
In the Western world, we are not very good at talking about death. It’s almost as if it has become…