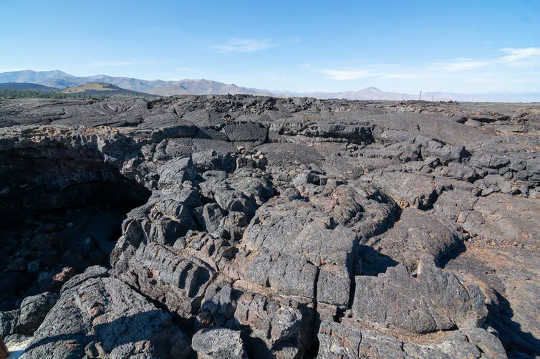 Weathering of rocks like these basalt formations in Idaho triggers chemical processes that remove carbon dioxide from the air. Matthew Dillon/Flickr, CC BY

Why has Earth’s climate remained so stable over geological time? The answer just might rock you.

Scientists have known for decades that rock weathering – the chemical breakdown of minerals in mountains and soils – removes carbon dioxide from the atmosphere and transforms it into stable minerals on the planet’s surface and in ocean sediments. But because this process operates over millions of years, it is too weak to offset modern global warming from human activities. 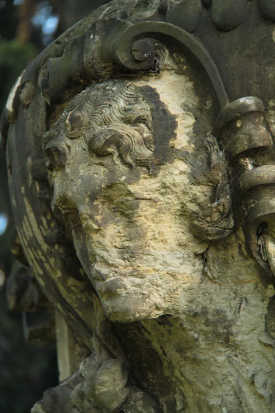 Acid rain damage to buildings and monuments, like this sandstone statue in Dresden, Germany, is a form of chemical weathering. Slick/Wikipedia

Many processes weather rocks on Earth’s surface, influenced by chemistry, biology, climate and plate tectonics. The dominant form of chemical weathering occurs when carbon dioxide combines with water in the soil and the ocean to make carbonic acid.

About 95% of Earth’s crust and mantle – the thick layer between the planet’s crust and its core – is made of silicate minerals, which are compounds of silicon and oxygen. Silicates are the main ingredient in most igneous rocks, which form when volcanic material cools and hardens. Such rocks make up about 15% of Earth’s land surface.

When carbonic acid comes in contact with certain silicate minerals, it triggers a chemical process known as the Urey reaction. This reaction pulls gaseous carbon dioxide from the atmosphere and combines it with water and calcium or magnesium silicates, producing two bicarbonate ions. Once the carbon dioxide is trapped in these soil carbonates, or ultimately washed into the ocean, it no longer warms the climate. 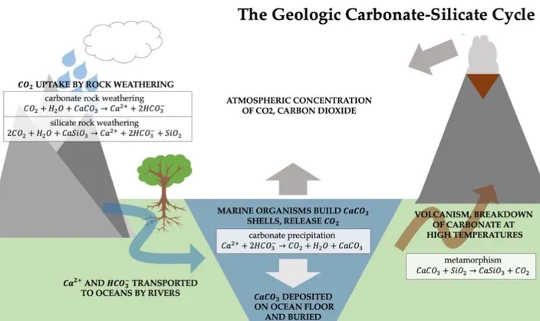 When carbonic acid dissolves calcium and magnesium silicate minerals, they break down into dissolved compounds, some of which contain carbon. These materials can flow to the ocean, where marine organisms use them to build shells. Later the shells are buried in ocean sediments. Volcanic activity releases some carbon back to the atmosphere, but much of it stays buried in rock for millions of years. Gretashum/Wikipedia, CC BY-SA

Carbon Capture From The Atmosphere Is Costly, Risky And Necessary

The Urey reaction runs at a higher rate when silicate-rich mountains such as the Himalayas expose fresh material to the atmosphere – for example, after a landslide – or when the climate becomes hotter and moister. Recent research demonstrates that humans can speed up the process substantially to help fight modern global warming.

The biggest limit on weathering is the amount of silicate minerals exposed at any given time. Grinding up volcanic silicate rocks into a fine powder increases the surface area available for reactions. Further, adding this rock dust to the soil exposes it to plant roots and soil microbes. Both roots and microbes produce carbon dioxide as they decompose organic matter in the soil. In turn, this increases carbonic acid concentrations that accelerate weathering.

One recent study by British and Americans scientists suggests that adding finely crushed silicate rock, such as basalt, to all cropland soil in China, India, the U.S. and Brazil could trigger weathering that would remove more than 2 billion tons of carbon dioxide from the atmosphere each year. For comparison, the U.S. emitted about 5.3 billion tons of carbon dioxide in 2018.

One compelling aspect of enhanced weathering is that, in controlled-environment studies involving basalt amendments of soil, cereal grain yields are improved by roughly 20%.

As basalt weathers, it increases vital plant nutrients that can boost production and increase crops yields. Mineral nutrients such as calcium, potassium and magnesium create healthier soils. Farmers have been amending soil with rock minerals for centuries, so the concept is nothing new. 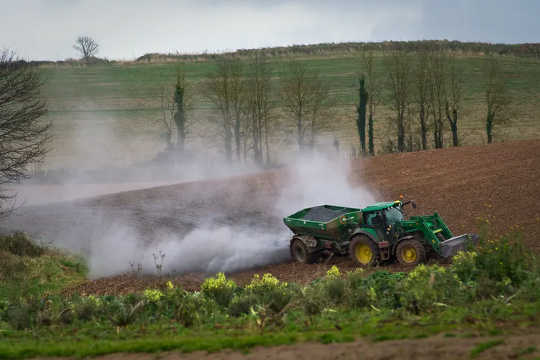 Spreading lime on a field in Devon, England to improve soil quality. Mark Robinson/Wikipedia, CC BY

At the Working Lands Innovation Center, we are conducting perhaps the largest enhanced weathering demonstration experiment on real farms in the world. We are partnering with farmers, ranchers, government, the mining industry and Native American tribes in California on some 50 acres of cropland soil amendment trials. We are testing the effects of rock dust and compost amendments on greenhouse gas emissions from the soil, carbon capture, crop yields, and plant and microbial health.

Our initial results suggest that adding basalt and wollastonite, a calcium silicate mineral, increased corn yields by 12% in the first year. Working with California’s greenhouse gas emissions trading program and our state’s diverse agricultural interests, we hope to establish a pathway that would offer monetary incentives to farmers and ranchers who allow enhanced rock weathering on their lands. We aim to create a protocol for farmers and ranchers to make money from the carbon they farm into the soil and help businesses and industry achieve their carbon neutrality goals.

Under the 2015 Paris climate agreement, nations have pledged to limit global warming to less then 2 degrees Celsius above preindustrial levels. This will require massive cuts in greenhouse gas emissions.

Pulling carbon dioxide from the air – also known as negative emissions – is also necessary to avoid the worst climate change outcomes, because atmospheric carbon dioxide has an average lifespan of more than 100 years. Every molecule of carbon dioxide that is released to the atmosphere through fossil fuel combustion or land clearing will remain there for many decades trapping heat and warming Earth’s surface.

In an even faster version of enhanced weathering, scientists pump supercritical carbon dioxide underground into basalt formations, where it reacts with minerals to form new solid rock.

Nations need a portfolio of solutions to create negative emissions. Enhanced weathering is poised for rapid scale-up, taking advantage of farm equipment that’s already in place, global mining operations and supply chains that currently deliver fertilizers and seeds worldwide. By addressing soil erosion and food security along with climate change, I believe rock weathering can help humans escape the hard place we find ourselves in today. by Joanne DiMaggio
Death is the great mystery of life. That is one of the reasons why the stories of those who have…

In The School of Life, It's Time to Shift From Manure to Compost

by Marie T. Russell, InnerSelf.com
If life is a school or a learning opportunity, then all the challenges we meet are tests…