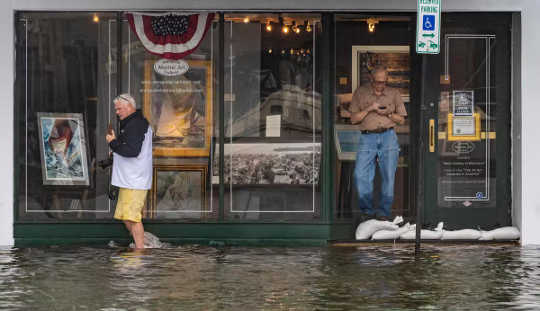 Florida isn’t the only state dealing with coastal flooding. Businesses in Annapolis, MD., face increasingly frequent high tide and storm surge flooding, as do homeowners in parts of Virginia, South Carolina and other states. Jim Watson/AFP via Getty Images

Apollo Beach, Florida, is a maze of canals lined with hundreds of houses perched right near the water’s edge. The whole community, just south of Tampa, is only about 3 feet above sea level, meaning it’s at risk from storm surge as sea levels rise.

Homebuyers along the U.S. coasts can check each property’s flood risk as easily as they check the size of the bedrooms – most coastal real estate listings now include future flood risk details that take climate change into account. In Apollo Beach, for example, many of the properties are at least 9 out of 10 on the flood risk scale.

That knowledge isn’t stopping homebuyers, though.

Waterfront homes are selling within days of going on the market, and the same story is playing out all along the South Florida coast at a time when scientific reports are warning about the rising risks of coastal flooding as the planet warms.

We are professors of urban geography and American politics who follow the real estate industry. To understand why people are ignoring a risk that could lead to expensive damage and eventually lower their property value, we talked to hundreds of Florida real estate agents about their clients’ motivations and concerns.

Here’s what we learned.

We surveyed 680 licensed Florida Realtors in late 2020. Their responses suggest that prospective homebuyers, by and large, are not taking elevation or flood vulnerability into account when searching for new homes, and the availability of detailed flood risk maps has had little or no impact on them.

Part of the problem may be that mortgage lenders and appraisers aren’t accounting for properties’ vulnerability to sea level rise, so homebuyers aren’t immediately feeling the risk in their pocketbooks. Wealthier buyers who don’t need a mortgage aren’t required to purchase flood insurance, and Congress has a history of rolling back flood insurance rate increases.

In short, nothing is forcing buyers to consider the long-term risks. 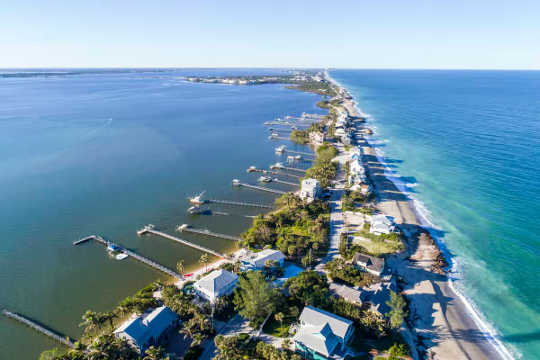 Many Florida beachfront homes and communities are at risk from sea level rise and storm surge. Jeffrey Greenberg/Universal Images Group via Getty Images

At the same time, studies are clearly showing how risks translate into costs. One recent paper by scientists who create flood risk maps found that Hillsborough County, Florida, home to Apollo Beach and Tampa, is likely to see a 70% increase in annual flood damage by 2050 because of climate change. That’s less than a 30-year mortgage away.

What real estate agents are hearing

We reasoned when we started the survey in 2020 that if some segment of the population was avoiding property at risk of flooding, then demand should decline and prices should fall. Our previous survey in 2018, involving coastal Florida homeowners, had found that Republicans and Democrats alike believed that their future home values would not be affected by rising seas.

To test the theory that the market is largely ignoring flood risk, we asked real estate agents what they saw: To what extent had they observed house prices either falling or not rising as rapidly for properties at risk of flooding? Forty-five percent reported “not at all.” Only 11 of the 680 agents indicated that house prices for properties at risk of flooding were “very frequently” stagnating or falling.

We also asked if they had seen mortgage lenders declining loan applications or increasing charges for loans in flood-prone areas, in the form of points or mortgage insurance, for example. Sixty percent said, “not at all,” and only 7% said “somewhat frequently,” “very frequently” or “all the time.”

The vast majority of agents, almost 70%, said they expect little impact on the property market in the next five to 10 years.

Here’s some of what they said.

“People are and will still buy in the coastal areas of Florida, and if they are buying, there will be no decrease in value. The largest pool of buyers driving market are retired or soon to be retired people and they have the belief that they will be long gone before there is any impact from climate change. They mainly are buying on emotion and not factoring in the long-term cost of ownership. They are also buying with cash and no mortgage.”

Even lenders currently have no real incentives to decline mortgage applications for properties at risk from future sea level rise. Federal agencies that purchase conforming mortgages do not currently require the collection of information about flood risk or likely sea level rise. If these requirements were to change, then flood risk would be translated into lending decision.

“Buyers of coastal properties are financially able to be more risk-oblivious and can afford the higher rate for insurance or be self-insured. Sea-level rise is not currently top-of-mind in our local market.”

Federal flood insurance has been heavily subsidized by U.S. tax dollars for years. In fact, the National Flood Insurance Program owes the U.S. Treasury about $20 billion for expenses exceeding the premiums homeowners pay. As of April 1, 2022, all of its new and renewed flood insurance policies will be subject to a new pricing system termed Risk Rating 2.0 designed to take risk into account.

But the program faces political pressure from members of Congress to ensure rates do not rise too quickly or get too high. Further, buyers who purchase houses for cash, a relatively large part of the market in South Florida, are not subject to flood insurance requirements.

“Wealthy people will still be enamored by the idea of living in front of the sea, but they will probably spend a lot of money making the property more resilient to the effects of sea-level rise. This means that maybe the demand for high end properties will not weaken so much.”

A few agents suggested that wealthy homeowners are taking the risks seriously and plan to invest in structural changes such as elevating homes that could make their properties safer from sea level rise and storm surge.

Because of rising sea levels and storm risks resulting from climate change, we conclude that many of the houses currently being sold in south Florida will not outlast their 30-year mortgages without damage or expensive adaptations, and that the resale of houses vulnerable to sea level rise is very likely to become increasingly difficult.

Florida policymakers to date have either ignored the risk or have taken only limited measures to patch weaknesses, sometimes increasing the risks elsewhere. For example, when sea walls are erected, they can change how sand washes in, increasing erosion in neighboring areas.

Many people believe “the market” will take care of this issue: that homebuyers, recognizing the looming risks, will discount prices on vulnerable properties, eventually reducing their attractiveness and value. But what we heard from Florida real estate agents casts doubt on the assumption that the market has yet integrated this risk.