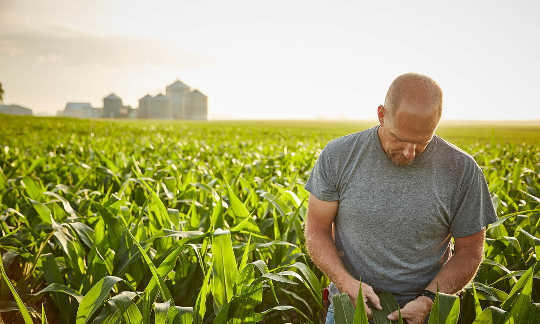 Australia certainly isn’t at risk of running out of food. It produces far more food than it consumes, with around 70% of farm production exported.

What is at risk is Australia’s ability to distribute it.

I was commissioned to prepare a new report on the impact of climate change on food supply, for for Farmers for Climate Action a constituent body of the National Farmers Federation with about 7,000 members.

Farmers for Climate Action is not otherwise politically aligned.

My methodology included a review of research in this area, interviews with more than a dozen farmers, farmer representative bodies, and other participants in the food supply chain, and a survey of media reporting of recent instances of food shortages.

Among the issues identified were the impact of drought, diseases and stress on livestock, the loss of food due to hotter weather, and shorter shelf lives.

An unexpected finding was the degree to which everyone involved in the supply chain is affected by uncertainty caused by climate change. It is making future weather highly unpredictable, making planning harder for both farms and in transport networks.

A further impact is on lending and insurance, where unpredictability means higher costs for financial products – if they can be obtained at all. Some farmers reported that they were unable to insure due to climate risks. All these costs are passed on to consumers in the form of higher food prices.

There are also opportunities.

Supply chains might become shorter to strengthen resilience and deliver fresher produce to consumers. Farm businesses and food processors are already moving to electrification to manage the risks of relying on fossil fuels and reduce greenhouse gas emissions, saving money in the process.

For businesses supplying food to export markets, a low-carbon supply chain will be a competitive advantage. In some cases, carbon-friendly production and transport will be a price of entry, without which markets won’t be available at all.

The report identifies four responses to climate change: risk management, resilience, adaptation, and mitigation (reducing the impact of climate change). All are needed. Even if Australia meets its Paris targets for climate change, there will be impacts to which the food supply chain will need to adapt.

Most farmers and businesses in the supply chain are good risk managers. But extreme weather events are increasing the base level of risk they have to deal with. The greater the risk, the more likely it is that risk management plans will be overwhelmed. If climate change continues unabated, this will become a certainty.

Governments have a role in strengthening or building alternatives to key supply lines and helping fill gaps in the market where private investment is insufficient due to uncertainty.

Governments also have an important risk management role in helping address gaps in data and information on climate impacts, to allow businesses to plan more effectively. Many industry bodies consulted were keen to see more research on the impacts of different projected levels of warming.

What farmers want is information and leadership

But the bottom line is that if climate change continues, adaptation will not be enough, a point clearly made by the three vice chairs of the Intergovernmental Panel on Climate Change when launching its latest report. The window for taking effective action on climate change is rapidly narrowing.

Farmers and processors are taking positive steps for themselves. For example, the Australian red meat industry has a target of becoming carbon neutral by 2030, well ahead of the government’s target of 2050.

Overwhelmingly, the farmers and farmer bodies consulted for the report wanted the Australian government to take the lead, providing clear guidance and direction on urgent climate action.

Farmers for Climate Action has responded by calling for deep emissions cuts this decade, to help avoid the worst impacts of climate change.