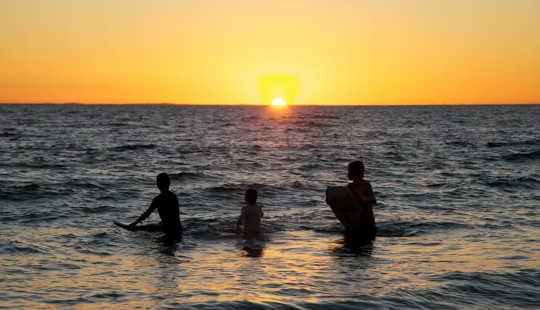 Perth smashed its previous heatwave records last week, after sweltering through six days in a row over 40℃ – and 11 days over 40℃ this summer so far. On top of that, Perth has suffered widespread power outages and a bushfire in the city’s north.

While the heatwave was unprecedented and extreme, for climate scientists like myself, it’s not surprising. Southwest Australia is considered a hotspot for climate change, as the long-term warming and drying trend is extremely pronounced.

Over the last century, the average global temperature has risen by more than 1℃. This has seen the number of days over 40℃ more than double in Perth.

To definitively state whether last week’s heatwave is a direct result of climate change, we’d need to carry out a formal attribution study. But we do know from climate models that these sorts of extreme events will only become more frequent.

These winds are brought about by “anti-cyclones” (or high pressure systems), which are a prominent feature of Perth weather, and we see these almost every day in our weather charts. Their impact depends on where they’re located and how they move.

This heatwave was caused by a strong and stationary anti-cyclone sitting in the Great Australian Bight. But that’s not the whole story, as the so-called “west coast trough” – another key feature of Perth summers – also plays a key role in determining how hot it gets.

When it’s stationary at the coast, it tends to bring warm north-easterly winds, which was the case during the heatwave. As the trough moves inland, we get cooler conditions, as we’ve been feeling this week.

According to climate change models, these anti-cyclones are becoming more frequent and intense. Indeed, a 2018 study confirmed the frequency of anti-cyclones is increasing between 30-40⁰ south of the equator, which includes southern Australia.

The hot, dry winds from the east are also projected to get more intense, bringing still more heat to WA.

The outlook from here

For WA, both regional and global climate projections suggest it will not only become even warmer in summer, but also drier in winter.

While climate models typically have large uncertainties when it comes to predicting rainfall, southwest WA is one of few regions worldwide where the vast majority of climate models agree we’ll see a marked decline in winter and spring rainfall – by up to 30% under a high emissions scenario.

All this implies we’re further increasing the chances of more consecutive days above 40℃, as we in Perth have just experienced.

Extreme heatwaves and dry spells can take a heavy toll on wildlife. For example, the region endured an exceptionally dry winter in 2010, followed by a hot summer in 2011, and then a marine heatwave in March, 2011.

What does this drying, heating trend mean for bushfires? Research published late last year has shown, for the first time, that climate change has markedly increased the frequency of forest megafires in Australia since 2000. A forest megafire is a bushfire that burns over 1 million hectares (or 10,000 square kilometres).

The study found that over the past 90 years, Australia has experienced four megafire years. Three of these occurred after 2000.

Given most of WA is prone to bushfires, further warming and drying not only exacerbates bushfire risk, but will also bring longer fire seasons.

What can we do about this?

The science could not be any clearer. We need to reach net zero emissions as soon as possible to avoid catastrophic climate change, otherwise extreme heat events, like we in Perth experienced, will simply become more normal.

But there is hope, as our models show we can avoid the worst of these impacts under a low emissions scenario, which could see global warming limited to 1.5℃ this century. This requires bold and urgent action now.

Under the inevitability of future heatwaves, Australia must urgently implement a national policy on housing and urban greening that takes into consideration more frequent and intense extremes so we can better manage the heat.

And with a month of summer still left, finding ways to keep cool is crucial, such as improving home insulation and air conditioning, if affordable. Simple steps can go a long way, too, such as keeping blinds closed and shutting doors in rooms you’re not using. by Sarah Varcas
This month’s astrology has the feel of Fresher’s Week at university, when arriving students are…

by Dr. Paul Napper, Psy.D. and Dr. Anthony Rao, Ph.D.
Human beings are social animals—we all need some degree of interaction with other humans for basic…

What To Do If You’re Around Blamers and Criticizers

by Jude Bijou, M.A., M.F.T.
Chances are you’ve seen and heard an emotional manipulator at work. Perhaps you even live or work…