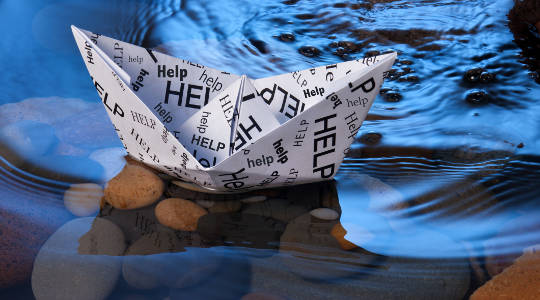 Climate-related catastrophes are expensive, whether they come on suddenly, like the thousand-year flood in Louisiana in August 2016, or move slowly and inexorably, like desertification in Turkey.

Now, scientists have come up with some things countries can do to pay for the irreversible losses climate change can cause, such as loss of life, species, or land due to rising seas, and damages like the destruction of infrastructure and property by hurricanes and floods.

A new paper aims to advance the discussion of loss and damage under the United Nations Framework Convention on Climate Change (UNFCCC) and appears just as the 2015 Paris Agreement goes into effect and the UNFCCC Conference of the Parties (COP22) is underway in Marrakesh from November 7 to 18.

“The basic formula in dealing with climate change is that it is best to sharply reduce our missions of greenhouse gases,” says study coauthor J. Timmons Roberts, professor of environmental studies and professor of sociology at Brown University.

“As a second line of defense, we can attempt to adapt to the impacts that come when we don’t mitigate emissions quickly enough. Emissions reductions have come too slowly, and now some impacts cannot be adapted to. That’s called ‘loss and damage,’ a reference to the common legal idea.”

That term, however, “has not been officially defined under the UNFCCC,” says Victoria Hoffmeister, a Brown undergraduate and paper coauthor, “and it remains unclear which specific mechanisms will be used to raise financial support for loss and damage.”

To remedy that lack of clarity, Saleemul Huq, director of the International Centre for Climate Change and Development in Bangladesh, asked Brown’s Climate and Development Lab (CDL) to look into ways to pay for loss and damage.

Researchers presented a draft of the study at a workshop held at the German Development Institute (DIE) in Germany during the UNFCCC’s negotiations in May 2016. Experts from around the world participated in the workshop and provided feedback that was incorporated into the final version of the paper, now available via DIE for use at COP22.

A key component of the Paris Agreement, a global climate change accord ratified by 97 parties in 2016, requires the enhancement of “understanding, action and support” for loss and damage associated with climate change.

At particular risk are the “least developed countries,” underdeveloped nations where more than 75 percent of the population lives in poverty, and small island developing states. Broadly, the financing mechanisms are intended to raise money from large nations that have historically emitted the most greenhouse gases to the poor and vulnerable, Hoffmeister says.

It is challenging to apply traditional financial tools to climate change loss and damage because they do not adequately address slow-onset events like sea-level rise, non-economic loss and damage or high-frequency events, such as repeated highly destructive hurricanes.

The researchers looked at financial instruments suggested by the Warsaw International Mechanism for Loss and Damage associated with Climate Change Impacts Executive Committee (WIM ExCom) and also considered innovative financial instruments, like levies on air travel and bunker fuels, and assessed the potential effectiveness of each.

Contingency finance, which involves setting aside funds for specified uses during emergencies, could enable quick responses after catastrophes, but posed tough planning challenges and limited flexibility, because it is difficult to predict how much money should be set aside and for which specific uses.

Two types of debt securities, climate-themed bonds and catastrophe bonds, earned mixed reviews. Climate-themed bonds, the authors write, are better suited to mitigation projects like wind or solar farms than to loss and damage funding, because bonds are typically sold to raise funds for projects that turn profits. On the other hand, catastrophe bonds protect the issuer from impacts of disasters, the researchers wrote, and investors might be attracted to them because they would allow diversification of risk.

While the difficulty of this approach is that it would require worldwide consent and the cost of enforcement would be significant, it is not a new or untested concept, and it could be “applied to financing loss and damage while simultaneously promoting substitution of cleaner energy sources.” by Gillian Kiley, Brown University
Government spending on the military yields fewer jobs, dollar for dollar, than spending on domestic… by Gillian Kiley, Brown University
Political polarization is largest for demographic groups in which individuals are least likely to… by Gillian Kiley, Brown University
In all parts of the United States, the number of neighborhoods that are home to a mix of black,… by Corey J. A. Bradshaw et al
Anyone with even a passing interest in the global environment knows all is not well. But just how…

by Alan Cohen
People who have found their true calling report that they are having so much fun, they feel like…

How To Increase Feelings Of Love At Any Time Of Year

by Jude Bijou, M.A., M.F.T.
It being the holiday season, it seems appropriate to review the emotion of love, since that is what…

by Tina Gilbertson
The word estrangement comes from the Latin word extraneare, meaning “to treat as a stranger.”…