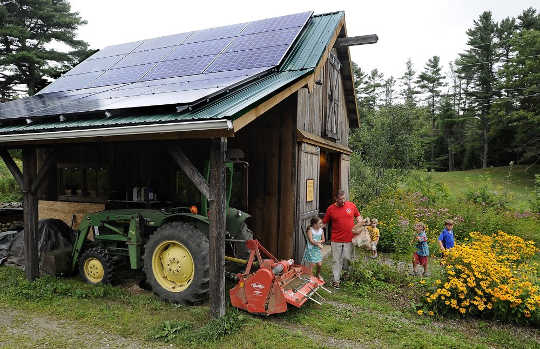 One of the most urgent challenges we face in the next several decades is feeding a growing world population without irreparably damaging Earth’s land, air and water systems. Nearly 800 million people worldwide are undernourished today. The U.N.‘s Sustainable Development Goals call for ending hunger and achieving food security by 2030.

The world is making progress in reducing hunger, but we have further to go. The annual Global Hunger Index, produced by the International Food Policy Research Institute, scores nations based on the proportion of their total population that is undernourished and several metrics that focus on children. Since 2000, the GHI has decreased across all regions of the world, but 50 countries – mainly in sub-Saharan Africa and South Asia – still have alarming or severe hunger rates.

At the Global Landscapes Initiative in the University of Minnesota’s Institute on the Environment, our research focuses on increasing global food security while reducing harmful impacts from agriculture to Earth’s natural resources. We have found that one key strategy to combating food insecurity – lack of access to nutritious foods – is increasing food production on small farms.

There are tremendous opportunities to increase yields throughout South Asia and sub-Saharan Africa. Increasing yields through new farming practices could triple maize production in sub-Saharan Africa and increase wheat and rice production in South Asia by about 50 percent. Gains on this scale could dramatically reduce hunger and food insecurity in some of the most vulnerable nations in the world.

The importance of small farms

The U.N. estimates that more than 70 percent of the world’s food-insecure people live in rural areas of developing countries where farming is typically the dominant land use and source of income. My colleague Leah Samberg recently led a study that combined household census data with satellite-derived land-cover data of croplands and pastures to map the average farm size in regions of the world dominated by smallholder farmers. In many countries with alarming and severe GHI scores, the average farm size is less than five hectares, or about 12 acres.

Small farms dominate South Asia and sub-Saharan Africa, where the hunger index scores are highest. These farms currently produce 41 percent of global calories from croplands, and the majority of crops that are essential for food security in many regions, including rice, cassava, groundnuts and millet.

So why is hunger prevalent in these same areas? The problem is that yield trends for the world’s major staple grains – wheat, rice and maize – have stagnated throughout developing regions.

To address yield gaps – the difference between the amount of food that land is producing and the amount it is capable of producing – we need to quantify them. EarthStat, a joint project of the GLI and the University of British Columbia’s Ramankutty Lab, provides global maps of yield gaps for 16 major crops that account for about 85 percent of all calories produced on croplands. Other valuable resources include the Global Yield Gap Atlas and IFPRI’s CELL5M database.

These global tools are useful for targeting policy and investments for broad strategies. But they need to be adapted for local issues, such as increasing access to seeds, fertilizer and markets.

Increasing yields and protecting the environment

Many institutions working with smallholder farmers have shown it is possible to increase yields and also make production more sustainable and profitable. For example, they have promoted direct seeding in rice fields rather than transplanting nursery-grown sprouts. This practice reduces labor costs and decreases the time required for plants to mature.

Another strategy, modified rice intensification, uses improved mechanization to transplant younger seedlings and use less water. A third strategy is to occasionally dry out rice fields, which reduces water use and increases availability of soil nutrients. These methods, which increase yields with less water use and labor, are becoming widely adopted in India and can be used in other rice-growing regions.

Creating change across millions of farms requires tremendous time investments to understand farmers’ needs and challenges and to gain their trust. There is currently no Silicon Valley-style approach to quickly “hack” food production on small farms.

But more gradual approaches can be very effective. The nonprofit One Acre Fund has helped over 400,000 farmers across six countries in Africa increase farm income by 55 percent by improving their access to credit for seeds and fertilizer and training them in farming techniques.

We can achieve food security and also promote sustainable agriculture by focusing on a small set of leverage points in the global food system. The two highest-payoff strategies are halting deforestation and changing irrigation management in rice paddies.

Agriculture expansion is the leading global driver of tropical deforestation, which has tremendous impacts on biodiversity and accounts for about 10 percent of global greenhouse gas emissions. Every unit of tropical land cleared leads to nearly twice the carbon loss and produces half as much food as a comparable unit in temperate zones. The stark trade-off occurs because lush tropical forests store lots of carbon and the yields gaps are commonly high. This means that increasing yields on existing tropical farmlands is much better for the environment than clearing new land for agriculture.

Many agriculture and development experts believe Africa is overdue for a Green Revolution, similar to the focused research and investments that produced dramatic yield increases in Asia and Latin America in the 1960s and 1970s. But agricultural expansion will likely be part of such an effort in Africa.

This will occur partly to produce more staple crops like cassava and sorghum. Currently, however, global markets for cash commodities like sugarcane are driving land grabs, reducing available farmland and using much more water than staple crops. Many institutions are working to improve seed varieties and soil management techniques to improve yields of staple crops, but these investments are small compared to the money going toward production of cash commodities.

Better irrigation management on rice farms is especially important in Asia, where rice is the main source of calories for many people. Growing it in flooded paddies produces large quantities of methane, a powerful greenhouse gas. Approaches such as the techniques mentioned above can maintain or improve yields and reduce water consumption, and even small changes can produce large reductions in overall GHG emissions without reducing rice production.

Sustainably increasing food production is an important piece of the puzzle, but it does not necessarily ensure that people will have constant access to food or will be well-nourished. As one example, studies have shown that farm households are more likely to have enough food to feed their families if they earn off-farm income in addition to raising crops.

An international group of food and nutrition scholars proposed a new research agenda in late 2016 that shifts the emphasis from calories – that is, feeding people – to nourishment. In their view, we need to organize an international effort as large as global campaigns against HIV/AIDs or smoking to remake global food systems so that healthy diets are available to everyone.

It would be overly optimistic to say that eliminating hunger is within reach, but we have the knowledge and tools to achieve this goal. The biggest breakthroughs likely will come through integrated strategies for producing and increasing access to nutritious food.

Paul West, Co-Director and Lead Scientist of the Global Landscapes Initiative, Institute on the Environment, University of Minnesota Is the Answer to the Overpopulation of Earth, More Monks? by Hyejune Park and Cosette Marie Joyner Armstrong
A massive force is reshaping the fashion industry: secondhand clothing. According to a new report,…